Sounders making it a ‘must win’ vs. Timbers

The summer mess started with a loss to Portland in the U.S. Open Cup, and Sounders say the mess ends with Sunday’s nationally televised argument with the hated Timbers at the Clink. 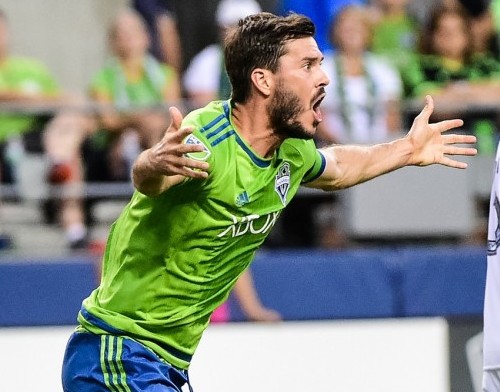 Sounders captain Brad Evans said that while Sunday’s match against Portland has big playoff implications, the squad is focusing on the present. / SoundersFC.com

The Sounders seemed to be in high spirits at training Friday, ahead of the Sunday clash (1:30 p.m., ESPN) against the bitter rivals from Portland. The Sounders will look to get three points in front of a packed CenturyLink house in a match that team captain Brad Evans described as do-or-die for Seattle’s postseason hopes.

Seattle has been woeful this summer, going 2-9 in league play since a disastrous 3-1 Open Cup loss to Portland in mid-June that saw Seattle finish the match with seven men on the pitch. Since that time, Seattle dropped from first place in the Supporters’ Shield standings to sixth in the Western Conference, just above the red line for the MLS postseason.

Sounders head coach Sigi Schmid expressed confidence that Sunday’s match would provide a conclusion to a dark chapter in the club’s history.

Strong words, to be sure, but the fact remains that apart from a 4-0 win against Orlando City Aug. 9, the club is still looking for answers given positional absences. Clint Dempsey and Osvaldo Alonso are still questionable for the weekend. Whether his quad is ready, Andreas Ivanschitz is unlikely to make his Sounders debut in the derby.

Recent bright spots have appeared in the form of Seattle’s other summer signings. Nelson Valdez and Román Torres have been integrating into the lineup at an accelerated rate, though consistent high-quality play still awaits for the new signings. Erik Friberg’s form has improved greatly since his arrival at the beginning of the summer. Friberg has notched a goal and an assist in his past three games in Rave Green.

Despite his long absence from the team, Friberg’s memory of the tense rivalry atmosphere had not dimmed.

“I’ve been waiting for this for four years,” said Friberg Friday.

Evans was realistic about his team’s requirements to stay in the postseason race, even though he hasn’t been told where he’ll play on the pitch Sunday:

“We’re at home, we expect to get three points; we pretty much have to.”

Still, Evans claimed that the long-term significance of the match was secondary to the immediate task at hand.

“Our focus has to remain one game at a time,” he said. “If we start thinking too far in advance, especially at this point, we get bit in the heels a little bit.”

The reality of Seattle’s situation  is certainly present in the players’ minds. Eight games remain in the regular season after Sunday, and unless the team produces, the Sounders could potentially miss the playoffs for the first time in their MLS incarnation.

Despite the pressure, Evans said that confidence was high.

“The vibe in camp is still very positive,” he said. “We realize that we have very good players, and we’re getting more guys healthy, but the end product on the field has to be a positive one. That’s got to be the result this weekend.”