Timbers coach Caleb Porter was irked at officiating and dismissive of Sounders’ play following Seattle’s 2-1 win that came on a controversial foul call on his goalkeeper. 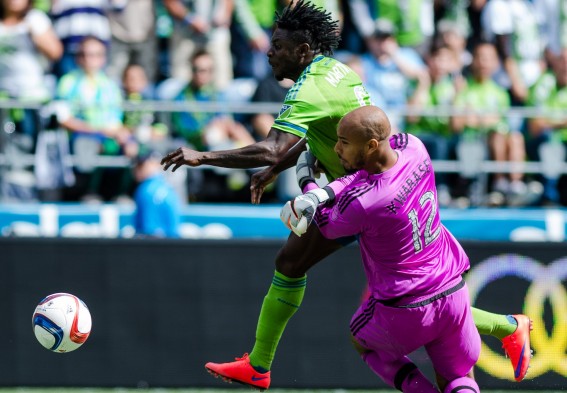 The chant reserved for Seattle’s fiercest, wood-themed foe usually goes “build a bonfire.” Sunday at the Clink,  it should have been “build a bunker,” as an early goal and a controversial penalty kick gave the Sounders the edge over the Portland Timbers, 2-1.

“The most important thing is that we got three points,” said Sounders coach Sigi Schmid. “Sometimes you’ve got to find your way back into rhythm and confidence just through hard work, and today was hard work. Their play was probably better than ours at times. But sometimes when you go through what we’ve been through, you’re looking for the three points.”

In front of a crowd of 64,358 at the rain-free Clink — fourth largest in club history —  Seattle (12-13-2) started Nelson Valdez and Obafemi Martins up top and Marco Pappa on the wing in place of Thomás, who was rested after his start against C.D. Olimpia in Honduras Wednesday. The start was Pappa’s first since he was cleared to rejoin the team following his DUI bust in July.

“It was a great feeling,” said the Guatemalan midfielder. “For me it was a special game because I came back to my teammates and I feel a lot of support, which made me happy. I’m very proud to be on this team.”

Seattle jumped out to an early lead when Nelson Valdez tackled the ball away from a defender inside Portland’s 18 in the sixth minute. Brad Evans and Obafemi Martins rushed forward, where Martins managed to pick the ball away from a sloppy clearance attempt. Martins finished the ball into the right side of the net to produce his third goal in as many matches since his return from injury.

Seattle’s second goal involved a controversial penalty kick. In the 41st minute, Tyrone Mears sent a long ball towards Martins, who broke free of the back line. Portland keeper Adam Kwarasey left his net to challenge Martins, but Martins managed to redirect the ball beyond Kwarasey before the two collided.

After hesitating a moment while the ball rolled over the end line, referee Alan Kelly pointed to the spot, to the dismay of the Timbers players around him. Brad Evans stepped up and easily converted the penalty, going left as Kwarasey dove right to double Seattle’s advantage.

Kelly’s post-match explanation to a pool reporter detailed that the penalty was given for what he adjudged to be a reckless challenge by Kwarasey on Martins.

Asked why Kwarasey was not sent off for the infraction, Kelly said Martins “did not have full control of the ball, thus in my opinion not making it (an) obvious goal-scoring opportunity in accordance with the law.”

The Timbers pulled a goal back in the 58th minute, as a Fanendo Adi corner found its way to the foot of Jack Jewsbury before sailing into the net.

“We had a problem losing runners. With the marking assignment, we continually lost (Jewsbury),” said Schmid, who claimed that changing assignments would be an adjustment to explore. “They won some headers, but the ones they win, where they’re backing up at the back post and heading them way over the top, those I’m not that concerned about. You can’t take everything away.”

Apart from that, a gutsy defensive performance from the Sounders was the only reason they secured a win. The Rave Green was outshot 20-6 by Portland (11-9-7), which managed to fire off 12 shots from inside the box. The Timbers also sent 21 crosses from open play through the box, many of which had to be frantically cleared.

Center back Román Torres had a memorable performance, twice clearing a loose ball from inside the six-yard box to avert catastrophe, and managing to out-muscle the six-foot-four, 185-pound Adi while battling on the sidelines.

“He’s a big guy, so that alone demands respect from opponents,” said Sounders keeper Stefan Frei of Torres. “He and Chad (Marshall) next to each other are a force to be reckoned with, and I think today the Timbers tried to get balls in behind on the ground because they knew that we have that size. I’m really happy that he was able to cut out so many balls for me.”

While Torres’ individual play was praiseworthy, communication with the rest of the back line needs improvement, no doubt exacerbated by Torres’ work-in-progress picking up English. In a telling miscue, Torres and Mears failed to communicate who was picking up a Adi on a back-post run, leading to an open header that sailed wide of the net.

Frei had his own moments of heroism, including a crucial one-on-one stop against Lucas Melano. Melano managed to break free on a defensive miscommunication, and was barreling into the penalty area with the ball at his feet. Frei elected not to charge the Argentine, instead falling to his right and making a highlight reel stop to Melano’s attempt from getting into the net.

Timbers head coach Caleb Porter was upset with the outcome, criticizing the officiating.

“The reality is I call a spade a spade and the official was very poor today,” said Porter.  “In this game, with two good teams, rivalry game, a lot at stake, we need a better referee. I think he is a good official, based on the games I’ve watched in the past. But today, he was very poor.”

“(Seattle) had nothing,” Porter went on to say of his squad’s opposition. “I can’t even remember one time where they broke us down. Their high-powered, big-budget team had trouble. They couldn’t create much on us and they get out of this game with three points off a poor first goal and then a PK.”

Schmid emphasized his team’s ability to get a result rather than the result’s quality.

“Everybody rolled up their sleeves and battled for each other, fought for each other. I think that’s the feeling in the locker room,” he said. “They are tired, they know they can play better, but they also know they got a result through grit and determination today. They set a goal for themselves today to get to three points, it didn’t matter how.”

For the time being, ugly but effective will do.

Lamar Neagle has played in every league match and started every CONCACAF Champions League match. The Tacoma native has four goals in over 1,800 minutes of play. Neagle was battered several times in a rough-and-tumble derby, but soldiered on until finally giving way to Osvaldo Alonso in the 66th minute . . . Clint Dempsey will join USMNT for a friendly against Brazil Sept. 9 at Gillette Stadium. The US is using the match as a tune-up ahead of its match against Mexico Oct. 10 to determine who will represent CONCACAF at the 2017 FIFA Confederations Cup. Dempsey has missed three matches due to a lingering hamstring injury, and his absence for the Brazil match means that the Sounders may have to do without him when they face San Jose Sept. 12. “We had conversations (with US head coach Jurgen Klinsmann), and we’ll continue to have conversations this week,” said Schmid. “It’s difficult for me to imagine him putting in a longer shift for us against Toronto and turn around, coming off this injury, three days later and play again.”