In adding four international transfer players during the busiest month of the calendar, the Sounders have asked for potential trouble. But hey, they’re already in trouble. 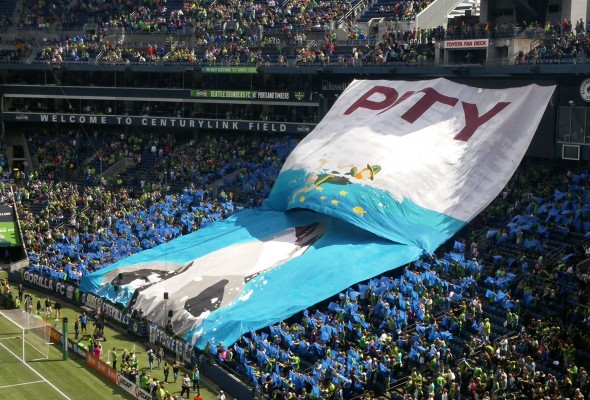 Another wonderful tifo by Sounders fans Sunday, a riff on the famous “Jaws” poster: “Pity” for the Timbers swimmer about to be snacked upon by the Sounders’ great white shark. / Art Thiel, Sportspress Northwest

For a guy who helped do the soccer equivalent of changing a tire on a truck rolling backward toward the lake, Sounders part-owner Adrian Hanauer seemed relatively cool Sunday afternoon. Might have had something to do with beating Portland 2-1, which also slowed Seattle’s roll down the MLS table.

Hanauer shook his head and offered a thin smile.

“Believe me,” he said, “I’m losing sleep over whether we can get it together fast enough.”

He referred to the magnum backslide the Sounders have taken during a summer in which international call-ups, injury and stupidity, wrapped around a schedule only a Special Forces drill sergeant could love, have nearly derailed a franchise that has been good from inception. Not championship good, but good enough for the hunt.

To find a forward gear away from 10 losses in 13 MLS games prior to the Timbers win, Hanauer and first-year general manager Garth Lagerway loaded up on four internationals during the transfer window, a mid-season makeover unprecedented in the Sounders’ MLS history.

Lots of prime-time talent. Whether they can be made to work together  . . .

“In this transfer window, given what was going on with the team — planned absences, suspensions, injuries — we decided to make some pretty significant moves,” Hanauer said. “The players we’ve added are of super-high quality.

“If it integrates quickly enough, people will see, coming out the other end, that this is a team can be pretty special. But certainly, we’ve put ourselves in a pretty deep hole. It’s unclear yet whether people are going to see that.”

Sunday, Friberg, Torres and Valdez were in the starting lineup (Ivanschitz was out with a sore leg; so was Clint Dempsey). It was something less than butterscotch smooth.

“There are risks and bumps in the road in terms of integrating players on the field,” Hanauer said. “(Marco) Pappa was playing with Friberg and Valdez for the first time.

The Sounders banged bumpers better than the Timbers, but remain below .500 at 12-13-2 in the Western Conference — an odd look for MLS’s most financially successful franchise.

If playoffs began today, the Sounders would qualify only because MLS this season expanded the playoffs to six teams per conference, and because they own the tiebreaker with San Jose, both with 38 points, eight back of West leader Los Angeles.

All is not right. Coach Sigi Schmid knew his side had been outplayed.

“Their play was probably better than ours at times,” he said. “I am not going to say the other way around.”

The sentiment was more than underscored by Caleb Porter, the Timbers’ caustic, bombastic coach.

“They had nothing,” Porter said. “I can’t even remember one time during the game when they broke us down. Their high-powered, big-budget team had trouble. They couldn’t create much on us and they get out of this game with three points off of a poor first goal and then a PK.”

Porter needs to come out of his shell.

The Sounders need come out right.

Starting with the right lineup.

Dempsey, nursing a sore hamstring, has been mostly a ghost this summer, but is also the poster child for Sounders problems — injury, USMNT duty and stupidity. Remember the three-game suspension for tearing up a referee’s notebook in mid-June?

In case it was overlooked: Straight outta second grade, Clint. And in a U.S. Open Cup match, fercripessake.

His partner in stupid was midfield ace Pappa, who was busted for a DUI and speeding in mid-July. He’s back from suspension, but his first start Sunday didn’t look good.

“I thought he was OK,” said Schmid. “It takes awhile to get back into the rhythm of the game.”

So too for the entire team.

“The difficulty is integrating players in an intense series of games,” Schmid said. “They don’t have training time, we’re trying to get them fit, then throw them into games before they’re entirely ready.”

He has a point — the eight games in the first 30 days of August were as many as the Sounders will play in September and October combined. That may provide a chance for the newbies to get acquainted with the oldies. Hanauer said the transfers were scouted for temperament as well.

“In terms of character, we knew we were adding really good guys to the locker room,” he said. “It wasn’t a last-minute, desperation set of moves, where who knows what we would have ended up with in the locker room.”

Hanauer said that while the roster revamping may have looked hasty, the idea was for the long term.

“We didn’t make these decisions for the last 10 games of the season,” he said. “We do believe we’ve put ourselves in extremely good position for next year also. This is not rent-a-player and move them on out.

“We’ll see how it looks at the end of this year. We feel like we have a window to win championships — a huge window, with Dempsey, Obafemi Martins, Ozzie Alonso, Brad Evans, Chad Marshall. But that window will close when they get too old. All four we’ve added in this window will be really important pieces to the puzzle for multiple years.”

Perhaps the monster-truck-rally portion of the season is ended. For the final eight matches, they are counting on the long tradition of the Paraguay/Panama/Austria/Sweden pipeline to deliver as it always has.