In contrast to worried fans, Seahawks assistant coach Tom Cable is bullish on his new offensive line set-up: “I think this might be, when it’s all said and done, the best group I’ve had.” 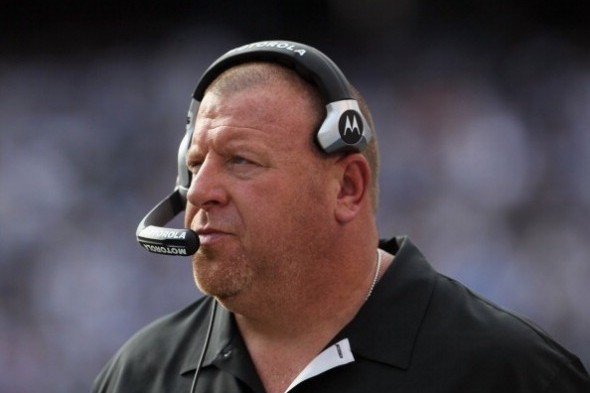 Tom Cable is bullish on his offensive line. / Sportspress Northwest

RENTON — In contrast to all the hand-wringing among 12s over the Seahawks’ offensive line’s seeming vulnerability, there is the hand of the unit’s coach, Tom Cable, held in the “stop” position.

At least, that’s how I interpreted his statements Tuesday, even if he didn’t actually hold up the shut-up signal.

“I’m really excited about where we’re going,” he said after practice. “I think this might be, when it’s all said and done, the best group I’ve had. We’ll see.”

Huh? Three guys who’ve had little to no experience at their positions starting in the NFL for the first time on a Super Bowl contender? If I didn’t know better, I’d suggest Cable mixed his alcohol with his medication.

But he was sober as he was sincere about LG Justin Britt, C Drew Nowak and RT Garry Gilliam. Cable confirmed Tuesday that, barring the unforeseen,  the newbies will start in the Sept. 13 opener in St. Louis.

“These guys are really special, and they’re just getting started,” he said. “If anyone is confident, it’s me more than anybody. I see them every day. I’ve seen where they’ve come the last two weeks. We haven’t been like that in the pre-season thus far. Pretty exciting.”

Cable may be the only one confident, based on the evidence so far. In the dozen possessions by the No. 1 unit in the pre-season, not a single touchdown has been scored. Then again, that’s what coaches  do — look though the windshield, not at the rear view mirror.

The group gets one more preseason chance at 7 p.m. Thursday when the Seahawks and Raiders meet at the Clink. But the fourth fake game is traditionally about long looks for players seeking the final 10 or so roster spots. Then again, with the amount of green in the O-line, every snap counts.

It’s hard to argue Cable’s main point — he’s seen and knows these guys more than anyone. He could well be speaking mostly for internal consumption, trying to convince players that his belief in them is worth risking his public cred. Neither would he be the first coach to hyper-inflate, simply because it’s in the DNA of coaches.

But Cable does have the track record of reaching consecutive Super Bowls with O-lines considered average at best. It helps to have arguably the best running back and best running quarterback in the NFL, but Cable has a proven ability to convince average guys that they too can be Walter Jones — for one or two plays anyway.

When it comes to Nowak, the converted defensive lineman destined for his first NFL start after the Seahawks Monday cut Lem Jeanpierre, his main competition, there is at least one indicator that he’s had some serious testing — Brandon Mebane, the Seahawks’ armored car of a nose tackle.

“I always told myself, if I can block Brandon Mebane, I can block most of the guys in the league,” said Nowak after practice. “There’s days when we have really good battles. I know if I give him a good run for his money, I can play in the league.”

Cable sees great value in having Nowak, a former defensive lineman in college, grinding against a guy that’s all rocks and cactus.

“When you get a chance to practice against one of the best at his position every single day, you have a choice to make,” Cable said. “Either you give in to it, and you don’t go anywhere, or you keep battling and battling. Brandon has been outstanding in terms of helping him, getting him to try to understand what (Mebane) is trying to do. He’s flourished.

“Brandon and I are in communication constantly. He’s going to give (Nowak) something new every day, something he has to deal with.”

Regarding left guard, Britt, converted in camp from right tackle, Cable has come to a conclusion.

“Outside (at right tackle), there’s all this space and you have to be patient,” Cable said. “Inside, you’re in a bar fight every snap. I think that mentality suits him well.”

Gilliam’s biggest issues at right tackle are strength and endurance. Which is why he’s gone long into the past two game after the first unit was done.

“We wanted him to be in that situation where he keeps going back out, and making adjustments at halftime,” Cable said. “I thought he got a little sloppy in the fourth quarter. It got easy for him. He took things for granted. Which is a great lesson for him.”

Should things go wrong in the new plan, it might be worthy to not forget about Jeanpierre. As with numerous vested veterans cut at this time in the NFL calendar, there is some salary cap maneuvering at play.

His $745,000 base salary would have been guaranteed as a fifth-year veteran if he had been on the opening-game roster. If he is not picked up by another team, the Seahawks can re-sign Jeanpierre after week 1 and pay him week to week, free of guarantees.

The maneuver means he could go elsewhere, but the Seahawks on the final cutdown Saturday could also sign a free agent who might be better than Jeanpierre. If poor results warrant, Jeanpierre could be back.

But to hear Cable tell it, that doesn’t seem likely. He’s all in on the new guys. If you don’t like it, talk to the hand.