First time the University of Washington played football in the state of Idaho, it didn’t go well. More than a century later, Huskies coach Chris Petersen is dreading the second game. 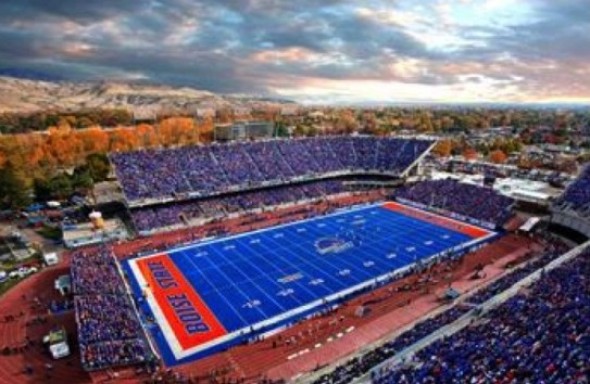 Albertsons Stadium will host the first visit from a University of Washington football team in Idaho since 1909. / Boise State athletics

The higher up the view that is taken of the Washington-Boise State season-opening football game Friday (7:15 p.m., ESPN) the more remarkable is the event.

Consider that UW’s last football game in the state of Idaho was Oct. 30, 1905, when a team coached by Oliver Cutts was stopped 8-0 by the University of Idaho in Moscow, back when touchdowns were four points.

The game before, the Huskies beat the Chemewa Indians 11-6. The week after, they beat the Sherman Indians 29-0. Clearly, the Huskies were no slouches, so the shutout by Idaho was sufficiently daunting that the Huskies let 110 years pass before returning.

Not sure how many adjacent states in the big-time, college-football-playing U.S. can claim so distant a relationship with so close a neighbor. But since UW leads the series (since 1940) with the University of Idaho 36-2-2, all played in Seattle, perhaps that helps explain the lack of intimacy.

But before Broncos fans spit up their breakfasts, be assured that I know UI is not Boise State. But Boise State had no big-time aspirations until 1996, when it went Division I, and did not play the Huskies until 2007, the year after BSU’s big national splash — a 13-0 season capped by the stunning win over Oklahoma in the Fiesta Bowl.

In QB Jake Locker’s redshirt freshman season opener at Husky Stadium, UW beat the Broncos 24-10. Chris Petersen was in his second season as BSU head coach, and Tyrone Willingham was still on the rails at Washington.

Meanwhile, Washington temporarily sank from view. Climaxing a long decay, thanks in part to NCAA sanctions from scandals in 1993 and 2003, the Huskies had a ghastly 0-12 season in 2008, from which they have yet to fully recover.

The upshot: Washington slipped to third in the Northwest college football power rankings (it says here) behind the Ducks and Broncos. What in the name of Steve Emtman . . . ?

The fall of the Huskies and the rise of the Broncos, ranked 23rd in the Associated Press preseason poll, are part of the reason why Petersen said Sunday that Boise State adherents are billing the game “as the biggest game in school history” — and why ESPN is televising it nationally.

The other part of the emotions attached in Idaho to this game is that the Huskies shredded the Broncos 38-6 in September 2013, which was:

Then came the real scorcher: The Huskies in December 2013 poached Petersen, who not only took eight assistants with him to Montlake but seven recruits who orally agreed to play for BSU.

Gotta hand it to the Huskies: They took the up-tempo, spread offense from the Ducks and the coach and some players from the Broncos. Stealing from the best.

But those assets likely aren’t ready to pay off Friday, according to Las Vegas.  The underclassman-heavy Huskies are 12-point underdogs in the Inland Empire to a team that was 12-2 a year ago.

As Huskies basketball is to Gonzaga, Huskies football is suddenly to Boise State.

A whole bunch of Broncos players who came to Boise because of Petersen and his assistants — 20 of 22 starters and 49 players total — finally get to act on their feelings of abandonment.

“There’s a good portion of the team that’s connected to that coaching staff,” Boise State senior safety Darian Thompson told the Idaho Statesman. “They’re the reason why we came to Boise State. If anything, it’s going to fuel the fire to want to go out there and win — especially at home in front of our crowd.

“It’s a regular game, as far as you’re either going to get a point in the win column or the loss column. But when it comes to the emotional side of it, I think there’s a little more added there.”

If Petersen were publicly honest, he would admit he’s been dreading this game since he took the job at Washington, which booked BSU in 2012. Upon his departure, Petersen talked personally with the upperclassmen who would be gone by 2015. He avoided the rest.

“I would definitely have reached out to all those guys,” he told the Statesman in the spring. “When you leave, it’s so weird and awkward, and then you don’t really follow up at all. And the reason you don’t follow up is you play them. That’s weird . . . This is why we coach, to have lifelong connections and bonds with those kids.”

Those players who remain, he knows well because he recruited them.

“The personnel is really good,” Petersen said this week. “That’s why they’re ranked where they’re ranked. It reminds me a little bit of us a few years ago. So many of those kids played as young guys and now they’re juniors and seniors. We played a bunch of those guys, which was a little bit uncommon for us over there at that time.

Should the Broncos manage to humiliate their old coach and the team from the Northwest’s capital city that poached him, there’s no historical reason to think that Washington will come back to Idaho for a very long time.

Pity. Just when the rivalry was heating up . . .