Thiel: Goodell is the threat to integrity of NFL 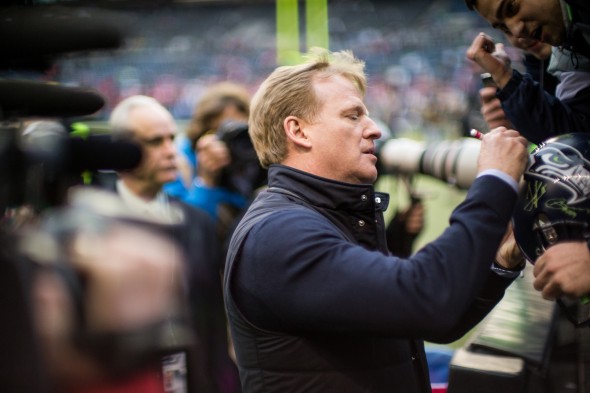 Roger Goodell may not be signing as many autographs these days. / Drew McKenzie, Sportspress Northwest

That’s the one-word explanation for how the NFL’s leadership continues to wrap itself around the axle of Deflategate. These people have confused popularity with infallibility. They have conflated business success with righteousness. And, aside from the continuing issue of player health, leadership has become the biggest threat to the integrity of the game, not some lame-ass stunt involving deflation of footballs.

That is, if the term integrity includes ideas such as fairness, due process, proportionality and cooperation (in this case, with the union). If those concepts don’t apply in the NFL, then every player who is suspended or fined under the NFL’s personal conduct policy should follow Patriots QB Tom Brady’s path into federal court.

That is where Thursday a judge, not Patriots fans, sportswriters or the union, told the NFL — explicitly, embarrassingly and globally —  that its leadership is out of control.

I use the term NFL leadership rather than just commissioner Roger Goodell, because within the hour that judge Richard Berman’s decision was announced, Goodell’s office announced it would appeal. That means that none among the battalion of lawyers, executives and staffers who run the league has the standing, courage or intellect to tell Goodell to stop the foolishness now.

It can be argued that it was already too late the day that Goodell announced he would be the arbitrator of Brady’s appeal of the four-game suspension on the results of the Wells investigation into deflation claims. Even national elections in China aren’t that rigged.

Perhaps it was already too late when Goodell’s ruling on the appeal explained its denial by featuring the fact that Brady destroyed his cell phone and its text messages to hide evidence.

Apparently, the hope was that the disclosure was sensational enough to make Brady seem guilty, so that he would quit the fight, and also distract fans from the failure of the NFL to follow procedures for suspensions as outlined in the collective bargaining agreement.

The strategic naivete is positively Rumsfeldian.

But now, the stubbornness shown by Goodell in the face of judicial logic — Berman did not rule on the facts of the deflation claims but on the absence of agreed-upon process — as well as national ridicule, becomes an even stronger indictment of his failure to provide competent leadership for his declared jihad on player misconduct.

It is Goodell who is the the bad actor here — the headhunter, the showboater, the abuser of himself and others, the very traits he has attempted to expunge from player behavior.

None of this should excuse Brady, who despite his denials of active involvement, did order the footballs doctored — based on the texts from the lower-rung Pats perps —  then worsened matters by lying.

Had he said his instructions were misconstrued but owned up to responsibility, he likely would have paid a fine for altering game equipment and the sports world would have been spared his cartoon sketch by a courtroom artist that scared small children. Goodell’s failure at each step in the drama likely continues now with the appeal, which might linger into into 2016.

My notifications are going bonkers. 1,000+ retweets and counting. Art connoisseurs love them some Tom Brady. pic.twitter.com/Eko0H1nNyb

In 2012, his predecessor, Paul Tagliabue, had to be called from retirement to unwind the mess Goodell made of the New Orleans Saints’ “Bountygate” scandal, vacating the suspensions because Goodell overreached. Same thing last year with the year-long suspension of Ravens RB Ray Rice for striking his then-fiancee.

Goodell’s repeated episodes of coloring outside the lines may be thrilling for a child, but for a guy paid $40 million annually to keep everything within the lines, his decision-making has to be considered atrocious.

The NFL and all of football has a steadily boiling threat to its future because of enormous attention now paid to head trauma. All hands need to be on deck, particularly in view of the December release of the Will Smith feature “Concussion,” whose trailer has already generated controversy. Sony Pictures is in hot water for purportedly caving to pressure from the NFL to sanitize the script. Whether it’s true, the NFL desperately needs a more enlightened approach than merely throwing money and lawyers at the problem.

It doesn’t need a commissioner in self-destruct mode, going the full Nero.

Now that he has made an enemy of his former friend and ally, Pats owner Robert Kraft, and has bollixed his main mission as “the conduct commissioner” just in time to overshadow the regular season opener, Goodell’s tenure needs to end.

It is easy to say that the NFL is so popular that no scandals or controversies threaten its hegemony. But never underestimate the power of hubris to rot an institution from within.