Another round of international call-ups, as well as injuries, have Seattle and Toronto guessing about each other’s lineups ahead of Saturday’s 5 p.m. match. 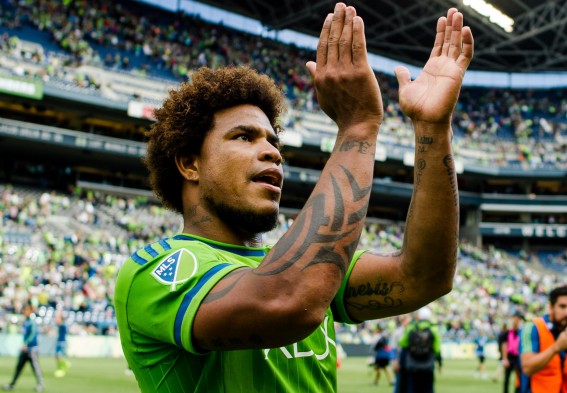 Román Torres, whose play in the back line anchored Seattle recently, will be absent when they face Toronto Saturday. / Jane Gershovich, Seattle Sounders FC

When the Sounders face off against Toronto FC at 5 p.m. Saturday at the Clink, they will do so without the services of midfielder Marco Pappa and center back Román Torres. Both are absent due to international duty with Panama and Guatemala, respectively.

Absences are nothing new for the Sounders this summer, who were without Pappa, Clint Dempsey and captain Brad Evans during the CONCACAF Gold Cup. The absences were compounded by injury woes for Obafemi Martins and Osvaldo Alonso, leading to Seattle’s fall from a Supporters’ Shield contender to a team that now must scramble for a place in the postseason.

Torres, acquired Aug. 12, is the captain of Panama’s national team, so expected absences were part of the deal when the Sounders picked him up.

“We had discussions with Panama, there’s a good relation there,” said Sounders coach Sigi Schmid. “They’re at the stage right now where they’re trying to figure everything out in terms of their players’ bonus structure and things like that. As a captain, (Torres) is very important to that discussion.”

As for Pappa, Schmid said that the importance of Guatemala’s third round 2018 World Cup qualifiers meant that Pappa had to answer his nation’s call:

“They’re playing WC qualifiers that are going to determine whether they are going to advance to the next round or not, so we can’t really hold him back if they want him.”

Pappa’s time away from the Sounders might be a good thing. The 27-year-old looked more than a little lost in his first start with the Sounders since rejoining the team after his July DUI arrest. Significant minutes with Guatemala might help him iron out some on-field issues before returning to the Sounders — if recent signing Andreas Ivanschitz hasn’t recovered from a quad injury and played his way into a starting spot by then.

For a change, international call-ups will also help the Sounders. Toronto forward and former Sunderland man Jozy Altidore will be in service for USMNT when his club comes to town. Less certain of absence will be Sebastian Giovinco, who, despite being called up for Italy’s Euro qualifiers ,was released from the Azzurri training camp Monday.

Schmid said he couldn’t be certain that Giovinco wouldn’t play, however.

“You never know with Giovinco,” he said. “I wouldn’t count him out entirely. It’s an adductor, is it a strain? Is it something he recovers from quickly? We play on Saturday, you never know.”

Giovinco has won back-to-back MLS player of the month awards, scoring 17 goals and notching 10 assists in 25 games for his new club. Jozy Altidore has added 10 goals of his own to Toronto’s campaign.

Toronto will have the services of Michael Bradley, whose call-up to the national team was delayed, as was Dempsey’s, so both would be available for Saturday’s fixture. Marshall said that limiting Bradley’s effectiveness would go a long way to producing a win.

“(Bradley) is always a focal point for them,” he said. “He’s a guy who’s all over the field, who runs a lot, so we need to match his intensity and his movement. If we can always have a guy around him and shut him down, I think we’ll be alright.”

Saturday’s match is crucial regardless of who is named to Toronto’s 18-man roster.

“All the games are the same for me right now — they’re all big games,” Schmid said. “This game is important because we’re at home, and every time we’re at home we want to get three points.”

Several question marks remain for starting eleven for both teams, such as whether Zach Scott or Brad Evans will get the nod to take Torres’ place in the back four. Toronto, played its cards close regarding how its offense will account for Altidore and Giovinco’s absences.

“It’s one of those things that cuts both ways right now,” said Schmid. “I’m sure (Toronto coach Greg Vanney) isn’t going to reveal any secrets and I’m not. We’ll find out on Saturday evening.”