The Dempsey-Martins combo provides a spark in 2-1 Sounders triumph over Toronto; Sigi Schmid out of action over health issue, expected back next week. 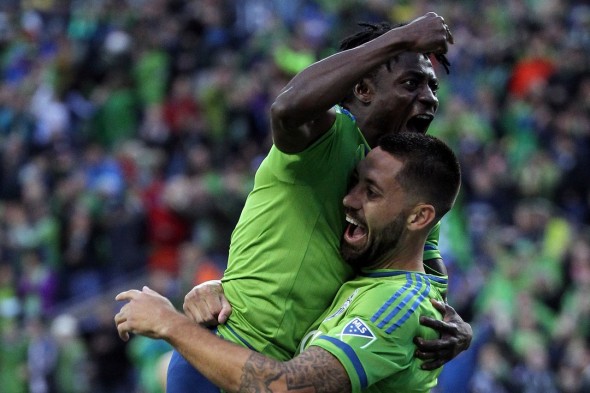 Obafemi Martins celebrates with Clint Dempsey after they connect for a goal six minutes into their first start together in three months. / Seattle Sounders FC

After three months in which they did not start a match together, Obafemi Martins and Clint Dempsey displayed familiar form as they each notched a goal in a 2-1 home win against Toronto FC Saturday night. Both forwards figured heavily in the other’s goal as Seattle gutted out three points.

It was a match marked as much by who was absent as by who wasn’t. Toronto forwards Jozy Altidore and Sebastian Giovinco, who combined have scored 27 of Toronto’s 45 goals this season, were out due to a national team call-up and injury, respectively. For Seattle, Román Torres and Marco Pappa were similarly absent due to national team duty.

Another absence, however, came as a surprise. An hour before kickoff, the Sounders released a statement saying that coach Sigi Schmid would not be at the match “due to a health-related issue.” The club was not more specific, but was confident that Schmid’s problem would soon be behind him and that he “expected to return to the club next week to resume his regular duties.”

“I think the guys really put the effort in,” said Schmetzer. “They all worked extremely hard. Was it the game the prettiest game? No, but the fact of the matter is that what wins championships is grit and determination and a little bit of good defending and timely goals.”

Dempsey’s return paid off almost immediately. In the sixth minute, the Texas native was surging forward when he looped the ball over Toronto’s back line. Obafemi Martins exploded forward, chipping past Toronto keeper Chris Konopka to make it 1-0.

In general, Martins and Dempsey looked like their old selves, with creative passes and excellent combinations moving forward. While their reunification bore traces of the brilliance crowds have come to expect, it also showed the rustiness of dormancy. Several times, the two missed minor connections due to mistaking one another’s intentions. Dempsey was twice caught offside after misreading Martins’ timing on the ball, giving away goal-scoring opportunities.

After gaining the lead, Seattle let up on the gas. The attacking play and short passes in the interior were replaced by back passes, drudgery, stationary kick-about, and more back passes.

The Sounders’ complacency cost them their advantage in the 59th minute. Following a set piece, Toronto’s Ashtone Morgan swung in a cross from the left alley, where a well-positioned Eriq Zavaleta easily converted the equalizer with a header.

Seattle snapped back to attention, but unlike the long stretch of summer when the team was unable to bear down when they needed to, the duo of Dempsey and Martins came through once again.

In the 77th minute, Dempsey sprung Martins with another aerial through ball. Martins raced down the right side of the field, cutting back past a charging defender to win a one-on-one with Konopka. Konopka charged off his line and managed to get the ball away from Martins, but was unable to control the rebound, which fell to the feet of Dempsey as he sprinted to catch up with his speedy Nigerian cohort. A Dempsey chip was enough to give the Sounders the edge and bring the 39,960 fans at the Clink to their feet.

Dempsey said that he and Martins have an innate link that allows their play to complement one another.

“We’ve always had that pick-up style understanding with each other with our movements,” said Dempsey. “It’s something that you can’t really teach.”

Sounders captain Brad Evans was proud of his team’s ability to come away with three points.

“It says a lot about the guys, a lot of grit, a lot of determination tonight to get the job done, especially at home. They threw their best at us. Any time you play a team that doesn’t have a full-strength lineup a lot of guys take a little bit of extra responsibility on their shoulders, but I’m very happy with the way our guys showed.”

One standout for Toronto was USMNT captain Michael Bradley, who roamed all over the field and created nightmares for the Sounders defense as he pulled the men marking him out of position.

“Bradley’s a tremendous player,” said Schmetzer. “I think we contained him in spells. They gave us some problems with their possession and then Bradley was doing his thing wherever he saw fit to find the ball. It was a little unorthodox, our guys hadn’t seen that, so I think for good portions of the game Toronto played well, and Michael had a lot to do with that.”

Toronto FC coach Greg Vanney also had praise for his squad’s effort on the pitch.

“I thought the guys played great and laid it all out there on the field,” said Vanney. “I thought we deserved something out of the match, but ultimately, these games come down to a play here or a play there. And that’s what it was in the end. We had some very good performances and some guys who haven’t played 90 minutes in a long time who went 90 minutes today.

Looking forward, Evans said that next week’s match against a San Jose team that trails Seattle by three points in the west with two games in hand would be a crucial road test of Seattle’s resolve.

“We’re still fighting for our lives here,” said Evans. “A couple results either way could send us skyrocketing or we could find ourselves below the red line, so that’s the reality right now.”

Forward Clint Dempsey acknowledged that he was still recovering from the hamstring injury that has sidelined him for most of August.

“I felt okay,” said Dempsey, who lasted 81 minutes Saturday while tallying a goal and an assist. “I still don’t feel one-hundred percent, that I can go out there and sprint, but I wanted to be out there and make an impact and give what I could.”

The 32-year-old was uncertain if the  long shift for his club Saturday would keep him from taking a mid-week trip to the East Coast to represent the U.S. in a friendly against Brazil.

“I still need to talk to (USMNT head coach Jurgen Klinsmann) tonight and see what’s going to be best for that decision,” said Dempsey…

Meanwhile, Seattle will be without the services of Osvaldo Alonso against San Jose, after the Cuban-born midfielder picked up a yellow card for simulation in the 30th minute.

Alonso made contact with a defender in the midfield, appearing to be genuinely tripped as he crashed to the ground. Referee Ted Unkel felt that Alonso had embellished the contact, however, and put him in the book.

“It is what it is,” said Alonso of the card. “The referee makes the decision and I have to be quiet and keep going, it’s part of soccer.”