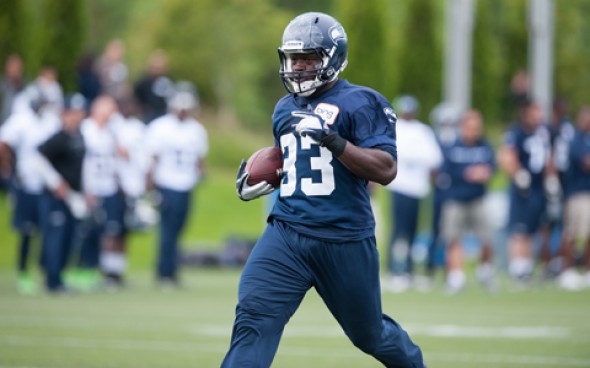 Chalk him up as a draft bust: The Seahawks traded RB Christine Michael Sunday to the Dallas Cowboys for a conditional seventh-round pick. The move, first reported by ESPN.com, allows the Seahawks to sign Fred Jackson, 34, the free-agent running back cut by Buffalo last week, to a one-year deal.

That means Jackson and rookie Thomas Rawls will back up Marshawn Lynch. The Seahawks have placed on injured reserve Robert Turbin, whose sprained ankle will sideline him for the season. He was Lynch’s backup for three seasons.

Rawls impressed during preseason with 158 yards in 30 carries. The native of Flint, MI., was recruited to the University of Michigan and later transferred to Central Michigan.

The fact that the Seahawks got next to nothing for Michael showed how his value had fallen from the high expectations of his second-round selection in the 2013 draft. His biggest liability was ball security — priorities one, two and three under the regime of coach Pete Carroll.

Michael showed flashes of his speed and quickness — he rushed for 254 yards on 52 carries in two seasons — which made it possible to imagine him as a potential successor to Lynch But he had problems with pass blocking and being assignment-correct, things the Seahawks coaches thought they could fix.

The Seahawks were prepared to cut him, but the native of Beaumont, TX., and a Texas A&M star found a job in his home state. The Cowboys are currently three-deep in tailbacks — Joseph Randle, Darren McFadden and Lance Dunbar.

The  Seahawks, meanwhile, have only three players, all backups, from what must be considered a poor draft in 2013 — DT Jordan Hill (third round), CB Tharold Simon (fifth) and TE Luke Willson (fifth).

The Seahawks also saw four players they cut Saturday get picked up on the waiver wire Sunday: Safeties Ronald Martin (Jets) Keenan Lambert (Raiders) and defensive linemen Obum Gwacham (Saints) and T.Y. McGill (Colts). The Seahawks did not add anyone off waivers.

Gwacham was a sixth-round pick in 2015. The others were undrafted free agents.

Seven players cut Saturday were signed Sunday to the practice squad, including two former University of Washington receivers, Kevin Smith and Kasen Williams. Both played well in the preseason, and cleared waivers Sunday. Williams, from Skyline High in Sammamish, caught a 15-yard touchdown pass Thursday against the Raiders that helped his cause.

Pinkins was a sixth-round draft choice in 2014, Poole a fourth-rounder in 2015. The rest are undrafted free agents.

The practice squad can include up to 10 players. According to a media report, former Chiefs CB Kevin Short was to have joined Seattle, but that was not announced Sunday. Players can come and go from the squad on a daily basis.