Leach is 12-26 as Cougars coach; answers due

After losing at home to a 30-point Big Sky Conference underdog in the opener, WSU coach Mike Leach is 12-26, and some of his players were blaming the weather. Huh? 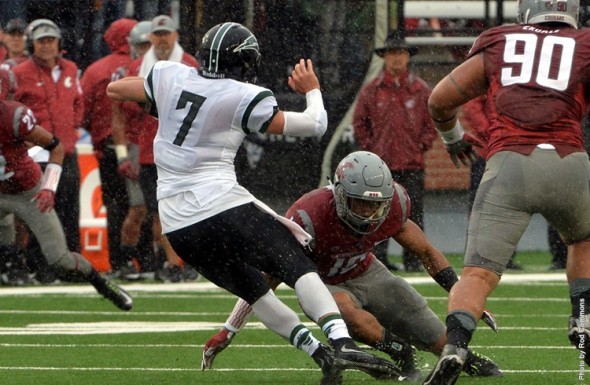 PULLMAN – Washington State agreed to pay Portland State half a million dollars to play football Saturday at Martin Stadium. In return, the Vikings agreed to roll over and play dead.

What? That wasn’t in the contract? Technically, no. Still, all parties were well aware of the exceedingly long odds facing the cash-starved Vikings, who accepted a $525,000 paycheck in exchange for a presumed whipping at the hands of a team from the mighty Pac-12 Conference.

“Presumed” is the key word here. As for “mighty,” that certainly didn’t apply to Washington State on a dark, dreary day that became infinitely darker and drearier for WSU supporters when the Cougars suffered one of the worst losses in school history.

Too strong a statement? Not at all. Consider the evidence:

The Cougars lost to a team picked to finish 12th in the 13-team Big Sky Conference in the league’s preseason media poll.

The Cougars lost to a current Big Sky school for the third time in school history – in 49 games dating back to 1903 – and for the first time in 31 home games.

The Cougars lost to a Portland State team they outscored 107-30 in their two other meetings, including 59-21 last year.

Leach’s best has produced a 12-26 record (7-20 Pac-12) in four years on the Palouse. He won three games in his first and third seasons, which is one less win than predecessor Paul Wulff won in his final year on the job. Leach’s Cougars are 0-4 in season openers and have lost six consecutive home games, which may help explain why attendance was just 24,302. Fewer people actually showed up, and the soggy stadium was largely deserted after halftime.

Making matters worse is the fact that Leach is the highest paid state employee in Washington at $2.75 million a year. Simply put, wins over teams like Portland State should not be expected so much as they are demanded.

“We have to understand it never comes easy,” Leach said.

Moving forward, there should be no confusion on that matter.

So-o-o-o, what exactly happened Saturday? Take it away, guys.

“They just out-competed us,” running back Gerard Wicks said.

“We tried to make too much happen,” Leach said. “We never loosened up.”

Leach added, “It’s a shame, because we’re a lot better team than that. We haven’t had a practice that bad.”

“Guys started to worry about what the conditions were more than the game,” Marks said.

Wicks agreed, saying, “It seemed like everybody was bothered by the weather instead of just playing the game.”

Quarterback Peyton Bender said, “I’d be lying to you if I said weather didn’t play a factor. Guys were dropping balls probably because it was wet.”

In a classic case of “when it rains, it pours” – literally – Bender was forced to make his college debut with barely a minute left in the game when starting quarterback Luke Falk landed awkwardly on his head and right (throwing) shoulder after being upended. Bender, a redshirt freshman from sunny Florida, went 1 for 4 and threw an interception in Portland State territory to end WSU’s final drive.

Will Falk be ready for Saturday’s game at Rutgers (12:30 p.m., ESPN2 or ESPNU)? Leach was typically flippant/arrogant/dismissive when asked about Falk’s injury.

“Hundred percent healthy just like virtually all of our players,” Leach lied.

Will Falk will be examined at a hospital?

Hey, Mike, how about answering the most important question: Why can’t you get your team to win more? It’s year No. 4, and we’re still hearing how your players don’t have things down mentally. At some point, doesn’t much of the blame for that land at the feet of the head coach?