New book by former Post-Intelligencer sportswriter Dan Raley has revealing stories from the most compelling figures who shaped Seattle’s history as a sports town. 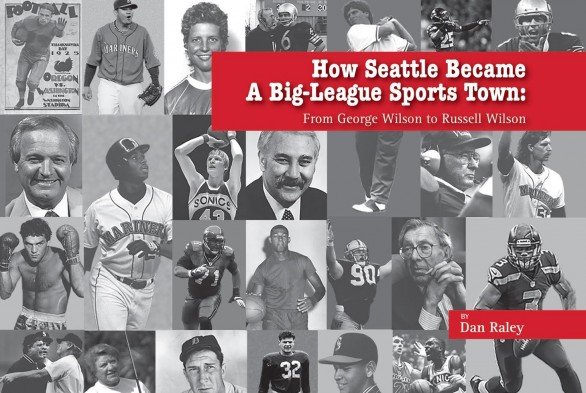 A compelling compendium of the people who made Seattle a big-league sports town. / Fairgreens Publishing

This is a public service announcement for all the full-stack developers, software engineers and web designers who have moved into the Seattle market and have helped crowd up the joint so densely that there wasn’t even room for rain clouds the entire summer.

You newbies are going to have to make nice with the incumbent residents. Don’t think you can do that by defending your paychecks that make $3,000 a month apartments commonplace. Not gonna work.

You need a conversational side door. Neutral ground. Minimum safe distance from the growing urban dystopia.

I recommend sports. Because sports for many is the icebreaker, the warm-up, the distraction, the humanizing conversation piece.

And I recommend something more than a remark like, “How ’bout them Seahawks/Sounders/Mariners/Huskies/Cougars?”

I recommend buying, “How Seattle Became a Big-League Sports Town: From George Wilson to Russell Wilson.” Read this, and you will know things that will get you in to and out of whatever conversation that needs a direction away from dismay.

Dan Raley’s latest sports book is neither reference work nor valentine. It is a revealing compilation of stories about the men and women who shaped a century of Seattle sports by their successes as well as misplays. Since I’m a believer that much can be learned about a place by its sports footprint, newbies can revel in the opportunity to understand their new place by its out-sized sports characters and why they are held in embrace or disdain.

As for the long-timers hereabouts, well, you can thank Seattle native Raley for supplying you with the ideal Christmas gift for every sports fan. Raley crosses from the 1920s to the Seahawks’ Super Bowls, offering heroes and rogues in a way that can connect the generations of lifers in this state.

Full disclosure: Raley, now a contract writer for The Boeing Co., and I are friends and longtime teammates at the late Seattle Post-Intelligencer. I offer no pretense of objectivity about him or his book. I do know a little about good journalism, and this is a prime example, because it is an honest, deep accounting of triumphs and foibles.

In the digital era when when wealthy pro leagues and college conferences create publishing empires of see-no-evil, speak-no-evil public relations networks, channels and websites, aspiring to fill the crater left by the business collapse of independent journalism, Raley’s book is a great reminder of the value of the honest chronicler.

Raley said in his revisits with interview subjects — many of whom were profiled in his long-running series, “Where Are They Now?”  in the print P-I — he regularly asked the question: “What can you tell me now about your story that wasn’t known then?”

Billy Joe Hobert had a dandy.

The bad-boy quarterback of the dominant University of Washington teams of the early 1990s created the NCAA rules firestorm that brought down Don James. A loan of $50,000 from an Idaho businessman with no affiliation with UW forced Hobert off the team and the UW into Pac-1o sanctions. James quit over the punishment, a convulsive drama whose echoes linger around the program even now.

Hobert told Raley that a guy called him and offered to kill Tom Farrey, the Seattle Times reporter who broke the Hobert story, based on an interview with Hobert’s mistress. Said Hobert:

The guy was a friend of a friend and he said, ‘Now Billy Joe, you know what I do, and I usually charge nine or 10 grand to do it, but I’ll do this one for free. If you want me to take out Tom Farrey, let me know.

Hobert said he jumped in his car and went directly to UW athletic director Barbara Hedges, fearful that Farrey would be killed and Hobert would be blamed. Hobert never talked to the man again. Farrey is healthy and happy at ESPN, and the Times never heard from Hedges. Farrey speculated Hedges feared another bad headline.

The book is littered with such nuggets that are unknown, little-known or long forgotten. One of Raley’s friends told him that he and his friends were longtime Seattle sports fans confident they knew most all of the juice. Then he read the story of 1950s Huskies football star Hugh McElhenny, and realized they were wrong. I won’t spoil the story here.

I too, felt I had a reasonable grip on local history. Then I read the story about Chuck Gilmur, who played basketball at Seattle’s Lincoln High School, served in World War II, returned to play at UW, then became the first Seattle player in the NBA.

A bench player for five seasons who set the early league’s record for personal fouls, Gilmur’s story was embarrassingly new to me — he was my high school home-room teacher. I never knew the saga of the man nicknamed “Elbows.”

The 324 pages are full of such treats, including something for the short-attention span crowd — top-10 lists: Mariners, Seahawks, Sonics, Huskies,  Totems, owners, coaches, golfers, hall of famers, moments. Strictly his opinion, strictly your argument.

If you need to get acquainted, or re-acquainted, with Seattle sports, you know what to ask of Santa. Besides the return of the Sonics.