Huskies’ Petersen had his fill of vanilla offense 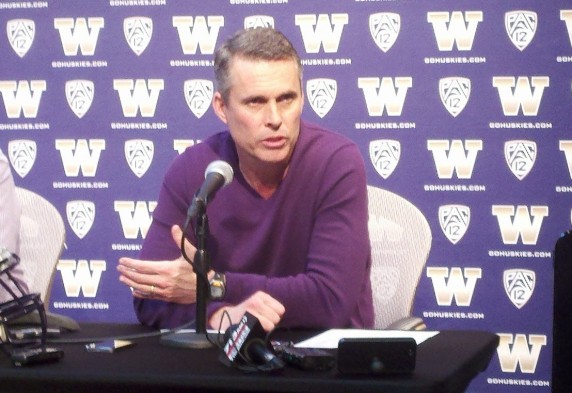 It wasn’t surprising that for a quarterback who was the first in University of Washington football history to start the initial game of his freshman season — on the road against a ranked opponent, no less — the playcalling was vanilla with a side of bland, garnished with Melba toast.

But the hospital-food menu is so over now, especially with the less-than-heralded Sacramento State Hornets of the Big Sky Conference at 11 a.m. Saturday in the home opener.

“I think we’ve got to take some chances,” said coach Chris Petersen Monday following the 16-13 loss at Boise State Friday. “Sometimes it’s coverage-predicated . . . We’ve got to design things where we’ve got chances to take some shots. And we will.”

The Huskies finished with 179 yards of total offense, but the leading receiver was a running back, Dwayne Washington, with seven catches and 53 yards. He also had the longest reception of 19 yards, mostly a run after catch.

Given that the outcome was so close after trailing 16-0 at the half, imagine if freshman QB Jake Browning dared to complete one time a 20-yarder for a first down. But the coaches’ fear of the freshman mistake played right into the hands of the Boise State defense, which bunched eight and nine defenders in the box to hold the Huskies to 29 yards in 22 carries.

“I was surprised we didn’t run better,” said Petersen, although had he been the Boise State coach, he would have defended Washington the same way — let the kid QB try to win the game.

Petersen said Browning was fooled a few times by Boise State’s disguises on coverage, including his lone interception in 34 attempts.

“(BSU) did a decent job of disguising a couple things, so I know he’d like to have a couple do-overs on those type of reads,” Petersen said. “But I thought for the most part he showed good poise. He threw some accurate passes in there and will continue to get comfortable.”

In the final offensive sequence, the Huskies reached the Broncos 19-yard line before a holding penalty on a receiver followed by a sack on a three-man rush set the Huskies back to the 37. A screen pass to Washington brought eight back. But on third down, Browning spiked the ball immediately, against the wishes of the coaching staff that wanted to drain the clock before attempting a game-tying field goal.

It was made moot when Cameron Van Winkle’s 46-yard field goal attempt, buffeted by a breeze, drifted just outside the right upright. Petersen dismissed the consequences of the early spike because it was fourth down inside 30 seconds and UW was out of timeouts, meaning trying another play to get closer ran the risk of not getting off a field goal attempt in time.

“That’s not a big deal at all,” he said. “That had nothing to do with nothing.”

The biggest deal for this week is getting Browning some downfield plays he can handle.

“That’s the art of coaching,” Petersen said. “We’ve got to be able to help him out. We’ve got to set him up for some success with easy throws and run the ball, and then take some chances down field. That’s got to get better.”

Dante Pettis was named Pac-12 special teams player of the week for his 76-yard punt return for a touchdown against Boise State, UW’s only TD . . . Senior co-captain RB Deontae Cooper sat out the game with an unspecified injury, but Petersen said it was not a problem with his surgically repaired knees and he might be ready Saturday . . . Junior QB Jeff Lindquist has had an ankle problem that kept him out Saturday . . . Eight true freshmen saw playing time: Browning, CBs Austin Joyner and Jordan Miller, LBs Tevis Bartlett and Ben Burr-Kirven, RB Myles Gaskin, WRs Isaiah Renfro and Chico McClatcher. Another nine redshirt freshmen saw their first college-game action.