Thiel: Seahawks’ fill-in for Kam all fired up

Dion Bailey, the undrafted free agent from USC who’s filling in for holdout Kam Chancellor, is full of confidence, telling the Rams to bring it on for his “coming-out party.” 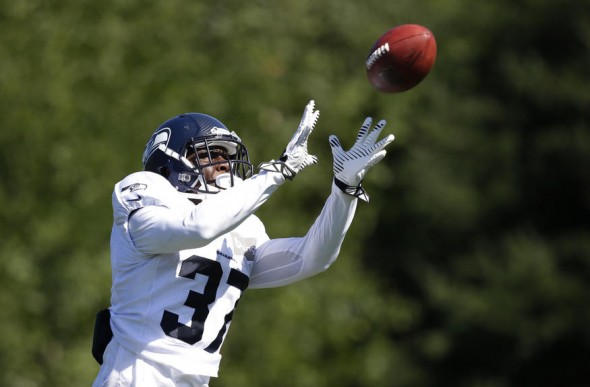 Dion Bailey says the Legion of Boom is not about the personnel. / Seahawks.com

Dion Bailey was a guy so confident in his pro future that he left USC after his junior year. The fact that he went undrafted, and didn’t play at all in 2014, has not diminished the enthusiasm he has for his chances in his Seahawks debut as the highly scrutinized stand-in for SS Kam Chancellor, declared out of Sunday’s opener.

“I hope they plan to come at me,” said Bailey before practice Wednesday. “It’ll make my coming-out party lot more exciting.”

No one will argue the point. Whether it will be exciting for the homestanding Rams or the visiting Seahawks remains to be seen.

“The more opportunities my way, the more plays I’ll make,” he said. “If they plan to to come at me, I hope they’re ready for the possibilities I have planned.”

Well, hey. What else can a young man say upon threshold of fulfilling a dream of starting in the NFL? That he’s scared? That he’s unsure?

The Seahawks have no choice but to put Bailey out there. Coach Pete Carroll said Wednesday that even if Chancellor ended his holdout on the spot, he wouldn’t play him.

Asked whether that would change if Chancellor showed up Thursday, Carroll answered, “He’s not here right now, so he’s not playing.”

If true, the shifting of money represents an improvement in the contract, something the Seahawks have refused to do so early in the four-year deal because of the precedent it sets. So matters remain stalemated.

That brings the story back to Bailey, and the predictable cheerleading that is accompanying his ascension to the Legion of Whom.

“Dion Bailey has had a great off season and camp with us,” said coach Pete Carroll. “He’s been in the position for quite a while with us. We feel very comfortable. He’s a playmaker, a very aggressive tackler. We’re going to count on him to do the things that he does well.

“We’ve had a long time getting ready with him, so we feel comfortable with that.”

CB Richard Sherman figures that Chancellor’s absence as well as his own and Earl Thomas’s resting to complete injury rehabs have given younger guys a shot in the preseason.

“Dion Bailey got his chance to develop some,” he said. “DeShawn Shead, Marcus Burley, Tye Smith, young guys got to see a lot more plays, see a lot more repetition with the first-team offenses.”

All well and good. The facts remain that Chancellor is 6-foot-3 and 232 pounds, and Bailey is 6-0 and 211. Chancellor has four years of experience, Bailey none. Chancellor is the unquestioned spiritual leader of the defense and Bailey is a guy who has yet to attempt to bust up his first NFL screen pass.

Wednesday afternoon at practice offered up the perfect paradigm. TE Luke Willson ran a 10-yard out route and Bailey slid under him to cover. QB Russell Wilson’s sideline pass was delivered at a high point perfect for the 6-5 Wilson to grab and five inches above the flailing hands of Bailey.

A very small sample size, yes, but you can bet something like that is already scripted into the Rams’ first 15 plays.

Bailey, who was recruited to USC by Carroll out of Los Angeles, remains undaunted.

“My whole football career, the odds have been stacked against me,” he said. “People didn’t think I was as athletic as the next person. That’s why I was switched in college from safety  (where he was the Pac-12 defensive freshman of the year) to linebacker.

“There’s always a positive in every negative situation. If you focus on the negative, you’ll never see the positives. I try to find a way to make it work.”

Give the kid credit for attempting to will his way to success.

“A lot of people don’t understand that this secondary is not about the personnel,” he said. “It’s about the attitude and philosophy. The LOB (Legion of Boom) has no (jersey) numbers attached to it. You play fast and physical.

“I just plan to keep up the standard they’ve held.”