Seahawks have made a sincere investment in special teams, which is needed because early on, it’s not going to be fun for the O-line or the Legion of Whom. 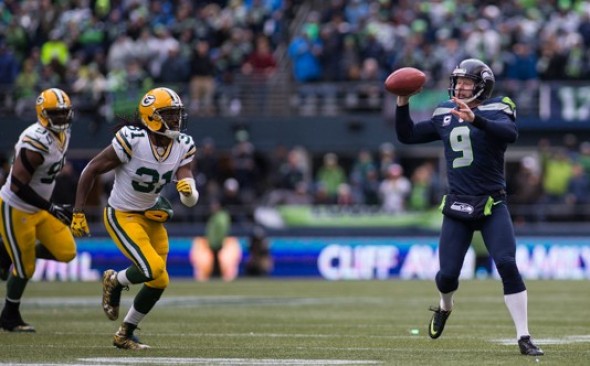 Seahawks punter Jon Ryan, in all his form and glory in the NFC Championship. / Drew McKenzie, Sportspress Northwest

In forecasting an outcome for the 2015 Seahawks, I considered the most recent two games that closed the 2014 season.

One was a preposterous, once-a-decade win over Green Bay that needed a fat-guy touchdown pass from a holder/punter. The other was a once-a-millennium loss to New England, when certain victory flipped to certain defeat in the instant of a goal-line interception that set a global record for foreheads slapped.

In those two outcomes rest the futility and fascination with forecasting football. It is a hapless exercise, and we are helpless to resist.

That isn’t to say that pro football is a random exercise. Most often, chalk prevails.

But the margins at the game’s pinnacle are so thin that to win consistently usually requires a certain man-made serendipity.

Patriots-haters will say that’s a fancy way to describe cheating. But Pats coach Bill Belichick won Super Bowl XLIX the previous Thursday with preparation. He told CB Malcolm Butler, who had been beaten for a TD in a scout-team simulation of the play Seattle would use on second-and-goal from the 1-yard line, that it was going to happen again if he didn’t break on the ball.

Butler broke on the ball, and into sports history. The Seahawks couldn’t have been more shocked if Mr. Stay-Puft walked into the stadium.

In the NFL in 2014, Russell Wilson’s pass was the 109th attempted from the 1-yard line, and the first to be picked off.

Whether by deceit or disguise, NFL results often come down to a willingness to innovate. Which is why I’m going to set aside the obvious themes of Russell Wilson, Jimmy Graham and Marshawn Lynch and the potential for unparalleled punch, as well as the add of rookie Frank Clark to give an already potent defense a game-wrecking pass rush.

The Seahawks season will come down to the smartness of its special teams, helping compensate for early-season woes in the offensive line and the secondary.

In 2014, Seahawks special teams were the weakest part of the enterprise. Ryan and Hauschka were good, but returns and coverages were all in the bottom third of the league.

The issue comes to the fore Sunday when the Seahawks meet the Rams in St. Louis and their coach, Jeff Fisher, who is an exploding cigar when it comes to special teams. Last season he fooled the Seahawks on two punt plays that led to a 28-26 triumph in week 7 that dropped the Seahawks to 3-3, bringing forth battalions of doomsayers forecasting the demise of the champs.

Stedman Bailey scored on a 90-yard punt return when the Rams fooled the Seahawks into thinking another returner was catching the ball. Punter Johnny Hekker threw for a first down deep in Rams territory to sustain a late drive. Another touchdown was set up by a conventional 75-yard kickoff return by Benny Cunningham.

“They may be as complex as all the teams put together in all of the things that they do,” he  said Wednesday of the Rams’ special teams. “So we’ve been preparing all camp to be well-versed in all of the different things we have to do. Being the opener, it’s great preparation for us.

“We have to be wide open about their fakes, their deceptions. They’re very bold about the things they do.”

Then the Seahawks have to counter-punch. Which is why on draft day Seahawks GM John Schneider came out of his seat to throw three picks at the Washington Redskins to move up in the third round to take Tyler Lockett.

Returning a punt and a kickoff for touchdowns in the preseason widened everyone’s eyes to the possibilities with Lockett. Such scores won’t be so easy in the regular season, but better field position from returns are going to take some pressure off a hastily assembled O-line that faces a front four entirely of first-round draft picks — Chris Long (No. 2, 2008), Robert Quinn (No. 14, 2011), Michael Bronkers (No. 14, 2012) and Aaron Donald (No. 13, 2014). Backup is Nick Fairley, taken 13th in 2011 by Detroit who signed as a free agent in the offseason.

The starters as a group had 39 sacks in the final 11 games of 2014. Nice, soft landing for Seattle’s three newbie linemen.

St. Louis’s offense with QB Nick Foles is a mystery, but so is the Legion of Whom. Already missing you-know-who, both Richard Sherman and Earl Thomas, tender from rehabbed injuries, will attempt their first tackles since the Super Bowl. Veteran free agent Cary Williams plays his first Seahawks game.

The difference may well be in special teams, whose importance to Seattle was underscored with two transactions following the cut to 53 players. The Seahawks sent a fifth-round draft pick to Kansas City for SS Kelcie McCray, known for his special teams role as vice, the guy who slows the opponent’s gunners. Pro Football Focus says he’s the best in the business.

Friday came word that the Seahawks plan to sign free agent LB Nick Moody, whom the 49ers cut last week. He too was a stud special teamer during his two seasons with San Francisco.

Both are upgrades from what the Seahawks have, moves that are a hunter-orange flag signaling the Seahawks don’t want to get pantsed again by Fisher.

I still think the Seahawks get beat in this one, 13-10, because they won’t handle the Rams’ D-line. They lose the following week too, in Green Bay, payback for the angst of the past three meetings, all Seahawks wins. They’ll also lose at Dallas, at home to Pittsburgh, at Minnesota and at Baltimore.

But they’ll win the final three readily to finish 10-6, having developed an offensive line to carry them into the playoffs. But no cushy bye week. They have to win three rounds to get back to the Super Bowl. They will.

As to whether they prevail in the Quest for the Lost Yard in the Super Bowl, see me in January. I’ll be the guy covered in rose petals for this forecast’s accuracy, the Oracle of the Fat-Guy Touchdown.