Only seven teams in the last 49 years have returned to the Super Bowl the year after losing it. Only two of the seven won. Those are the odds facing the Seahawks. 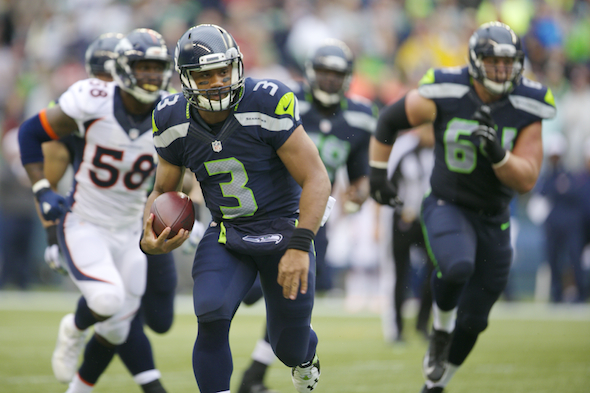 Despite losing WR Jordy Nelson to a season-ending ACL rupture, the Green Bay Packers are favored by most pundits and TV networks to win Super Bowl 50. Seattle is slightly behind the Packers (and Indianapolis Colts) in part because only seven previous Super Bowl losers returned to title match the following year, none since Buffalo in 1994. And of the seven, only two won the Super Bowl a year after losing it, Miami the last in 1973.

The Seahawks also face a diabolical schedule, starting with two on the road, Sunday at the Edward Jones Dome in St. Louis and then at Lambeau Field in Green Bay the following Sunday night. Seattle has struggled in both venues, making an 0-2 start not, to cite Foghorn Leghorn, the most unheard of thing anyone ever heard of.

Dating to the inaugural Super Bowl in 1967, only three teams have overcome an 0-2 start to win it all: 1993 Dallas Cowboys, 2001 New England Patriots and 2007 New York Giants. A Week 2 loss to Green Bay (if the experts are correct about the Packers) could send the Seahawks to Lambeau Field for the NFC Championship in January, nixing Seattle’s major edge in reaching the Super Bowl the past two years.

Stomping through the weeds of the schedule, the Seahawks take on an NFL-high four opponents coming off a bye week. They don’t play a single team involved in the second of two-plus away games. The New York Giants are the only other team stuck on that ark.

While the Seahawks will play a franchise-record five prime-time games and are 13-1 in such contests under Pete Carroll, they will also play nine times against 2014 playoff teams, including two against clubs they met in the postseason en route to Super Bowl XLIX in Phoenix, site of the disaster for the ages.

The Seahawks will meet five of those teams — Green Bay (Sept. 20), Detroit (Oct. 5), Cincinnati (Oct. 11), Carolina (Oct. 18) and Dallas (Nov. 1) — in the season’s first eight weeks, including three on the road (Packers, Bengals, Cowboys). To ease that pain, the Seahawks have a more favorable bye, coming in Week 9, vs. last year’s Week 4. But . . . the Seahawks play three of four on the road heading into the bye.

Best news about the schedule: the Seahawks play five of their final eight at CenturyLink Field, including three in a row vs. Arizona, San Francisco and Pittsburgh from Nov. 15-29. But that will help only if the Seahawks are still relevant. Schedule breakdown:

First up Sunday, the Rams surely rank among quarterback Russell Wilson’s least-favorite opponents. Four of the past six Seahawks-Rams games, all involving Wilson, have been decided by less than a touchdown. And, although Wilson has a 4-2 record against St. Louis, he has absorbed a severe battering. Teams recording most sacks against Wilson since his rookie year of 2012:

Apart from the sacks, Wilson rarely has been at his optimum against the Rams. In a 19-12 loss Sept. 30, 2012 at the Edward Jones Dome, Wilson tossed three interceptions, the killer pick thrown at the St. Louis 25-yard line with a minute to go.

The Seahawks also fell victim to St. Louis trickery that day when a fake field goal turned into a two-yard TD pass from punter Johnny Hecker to Danny Amendola.

Wilson threw an 80-yard TD Oct. 29, 2013 to Golden Tate, who drew an unsportsmanlike conduct penalty for mocking the Rams en route to the end zone. But the Seahawks generated only 55 other yards as Wilson suffered seven sacks, then a career high.

The Seahawks beat St. Louis Dec. 29, 2013 27-9, but the Rams took Wilson down four more times and might have made the game closer if not for 12 penalties, four for fighting, for 87 yards.

Wilson enjoyed a statistical picnic against the Rams last Oct. 20 when he became the first quarterback in NFL history with a 300-yard passing and 100-yard rushing game, but walked off a 28-26 loser after St. Louis twice resorted to special teams trickery: A pass by punter Hekker to Benny Cunningham that set up a TD and Stedman Bailey’s 90-yard TD on a trick punt return.

Wilson’s career times sacked total in games against the Rams reached 25 three days after Christmas. Wilson was also intercepted in a 20-6 Seattle win in which Steve Hauschka field goals and Bruce Irvin’s 47-yard INT return provided the bulk of the scoring.

“They are a good team and they really play us tough,” Carroll said this week. “They play everybody in the division tough. They have made problems there (Jones Dome) for us, for sure. We’re going to have to be ready for a lot of stuff.”

The Seahawks haven’t lost an opener since 2012. Nor have they had a tougher Week 2 matchup than their Sept. 20 date in Green Bay.

“We need to be on this,” Carroll said.

Or else the season will fly off the rails before the first leaf drops.