Felix Hernandez pitched eight shutout innings and Nelson Cruz, despite a gimpy leg, hit his 40th home run as the Mariners shut out the Rangers back to back. 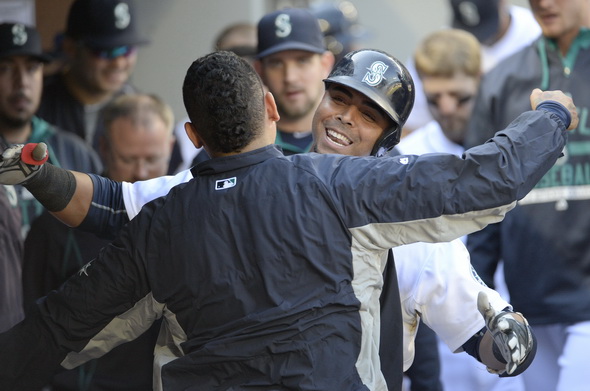 Felix Hernandez was in fine form and received all the offense he needed from DH Nelson Cruz and LF Mark Trumbo as the Mariners beat Texas with a second consecutive shutout, this one 5-0 Thursday afternoon (box score) in front of 16,842 fans. Seattle has won seven of its past nine, while the Rangers fell 2½ games behind Houston in the AL West standings.

Cruz hobbling around the basepaths to score a run after a first-inning single was somewhat painful to watch. So it was a relief to see Cruz, in his first game back from a week-long quad injury, doing a home-run trot in the seventh. His two-run shot turned a 3-0 game into a laugher.

Hernandez made sure the Texas bats didn’t wake up after Vidal Nuno’s outstanding Tuesday performance. Seattle’s ace pitched eight scoreless innings, allowing just three hits, before Tom Wilhelmsen finished it off. Hernandez struck out eight and allowed one runner past first base – stranding leadoff hitter Mitch Moreland at third in the second. Over the final 18 innings of the series, the Rangers had just five hits.

Cruz’s homer capped a 2-for-4 performance. Trumbo went 2-for-3 with the two RBIs, finishing the Texas series with a .563 batting average (9-for-16). His two-RBI double in the first inning capped a string of five consecutive at-bats with a hit. Trumbo has hit safely in 12 consecutive games, longest streak of his career.

“Numbers are numbers. I’m just focused on games and what I’m able to do to help my
team win games.” –Cruz on reaching the 40-homer milestone for the second consecutive year.

Cruz was back Thursday after missing six games with a strained quad. Cruz hit third and served as DH . . . Seattle still hasn’t named a Sunday starter. LHP James Paxton is likely to go after throwing a successful bullpen session Wednesday, but RHP Taijuan Walker is ready just in case . . . The Mariners had not lost a series since Aug. 21-23, when the White Sox took two out of three at Safeco Field.