Signed to a three-year, $18 million contract in May, Cary Williams has some Byron Maxwell-sized shoes to fill in while holding off younger Tharold Simon at right cornerback. 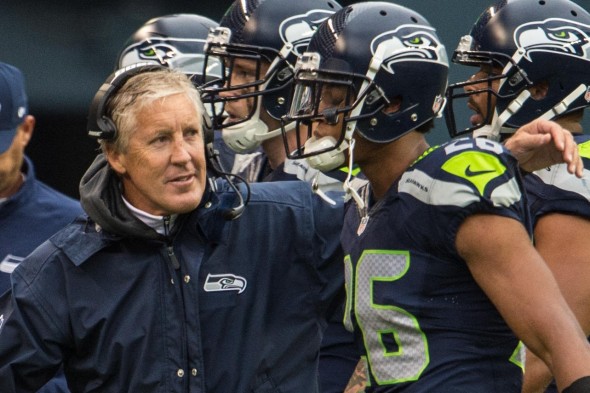 Cary Williams is a steady veteran presence, but it’s no secret he’ll be the point of attack for opposing quarterbacks. / Rod Mar, Seattle Seahawks

After high casualties, the Legion of Boom will feature some new faces in its season lid-lifter in St. Louis Sunday. One of those faces will be CB Cary Williams, an eight-year veteran acquired in May to ostensibly replace Byron Maxwell.

With all the attention on SS Kam Chancellor’s contract dispute and the injuries to Earl Thomas and Richard Sherman, the acquisition of the 30-year-old after his release by the Eagles remains in the background.

Regardless, Williams may prove a sturdy addition to Seattle’s pass coverage. Williams started on the Ravens team that won the Harbaugh Super Bowl during the 2012 season and started every game of the past four seasons with two teams, so high expectations are nothing new for him.

“It’s no pressure at all. Pressure is what you make it,” said Williams before practice Wednesday. “We’ve got a great group. I can lean heavily on those guys. I understand my position, I understand my role and I just want to go out there and compete as best as I possibly can.”

At six-foot-one, the 190-pound Miami native fits what the Seahawks want out of their backs, according to Pete Carroll.

“He’s a big guy,” said Carroll. “He knows how to play the way we want to play, with hands on guys. I’m really excited to see him take over.”

Still, Williams is no All-Pro. As the 11th-most targeted DB in the league last season, one imagines that the ball will often be headed his way. Williams will no doubt have plenty of pressure to perform, especially with Carroll mentioning young CB Tharold Simon in the same breath as Williams.

“Tharold’s a good football player too,” said Carroll. “And the competition will remain as we go through the season — for all of our guy. But that’s a good one for us too. Cary knows he’s got to keep pushing and I’m sure he’ll see some action.”

Williams didn’t have much to say about a potential position battle, save that he relished the opportunity to get better.

“At the end of the day, I’m just trying to get better, trying to compete as best as I possibly can and be the best me I can possibly be,” said Williams. “You take every day like a professional. The competition rises on Sunday, but you rise to the occasion because you’re prepared.”

How far he can go to replacing Maxwell at RCB? Sunday will be the first real chance to assess that as he drops back against former Eagles teammate Nick Foles. Carroll was confident.

“He’s totally ready for the season,” said Carroll. “He’s had a good preseason, we’ve worked him a lot. He’s gone up against our best guys as much as we could do it. We’ve taxed him in every way.”

Williams sounded ready as he starts a new phase of his career.