The home opener was a yawner, but the Huskies established a running game and a downfield passing game against over-matched Sacramento State of the Big Sky Conference. 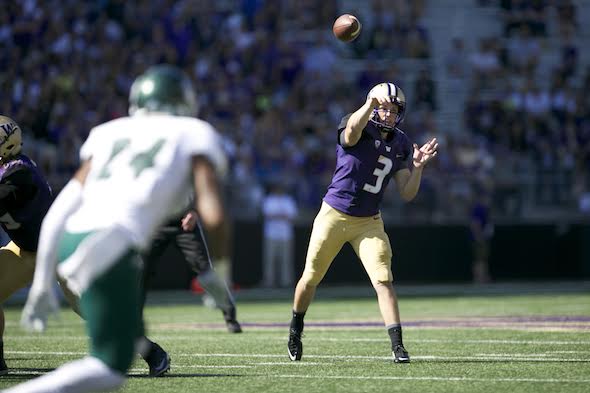 Myles Gaskin ran for 146 yards and three touchdowns, Jake Browning threw for 326 and two scores, and Washington, after a slow offensive start, erupted for 28 second-quarter points to bury Sacramento State of the Big Sky Conference 49-0 Saturday afternoon at Husky Stadium (box). Washington (1-1) received an equally outstanding effort by its defense, recording the school’s biggest shutout victory in a home opener since a 55-0 thumping of Texas El Paso in 1982, and its first since a 26-0 win over Northwestern in 1984.

With Washington breezing 21-0 and two minutes remaining in the second quarter, Browning, a freshman from Granite Bay, CA., in his second career start, took the Huskies on a 90-yard, two-minute march by completing all five passes, including throws of 30 and 23 yards to TE Joshua Perkins. Browning didn’t factor in the touchdown play  — Dwayne Washington tallied from a yard out — but his impressive drive effectively ended Sacramento State’s day.

A freshman from Seattle’ O’Dea High School, Gaskin scored on runs of 3 and 16 yards in the second quarter as Washington built a 14-0 lead, and added a 78-yard romp in the third as the Huskies extended the margin to 49-0. Gaskin averaged 10.4 yards per touch.

Browning completed 17 of 24 although he nearly had two picked off. His first TD pass, 78 yards, skipped off a defender’s hands and into the clutches of  Marvin Hall, who had clear sailing to the end zone. Browning’s second, 49 yards to freshman Chico McClatcher, gave UW a 42-0 lead and ended Browning’s day.

The Huskies nearly had their shutout spoiled with nine minutes remaining when the Hornets strip-sacked backup quarterback K.J. Carta-Samuels and recovered at the UW four-yard line. But aided by a 15-yard unsportsmanlike conduct penalty, UW pushed Sac State out of touchdown range, then Brad Cornish had his 48-yard field goal attempt snuffed.

Washington held Sacramento State to 212 yards, only 11 rushing, as the Hornets averaged 0.4 yards per carry. Cornish also missed a 44-yard attempt in the first quarter. Washington pitched the shutout despite Sacramento State leading the time of possession, 33:51 to 26:09.

The Huskies, meeting the Hornets for the first time, improved to 21-1-1 against current members of the Big Sky Conference and to 91-28-5 all-time in home openers . . . Washington is 12-2 over its past 14 non-league home games and has a 10-game winning streak in such contests . . . Washington had only three penalties for 30 yards.