Jake Browning had a memorable debut at Husky Stadium, throwing for 326 yards on 17 completions. But he also had plays that in the Pac-12 would have been sacks and picks. 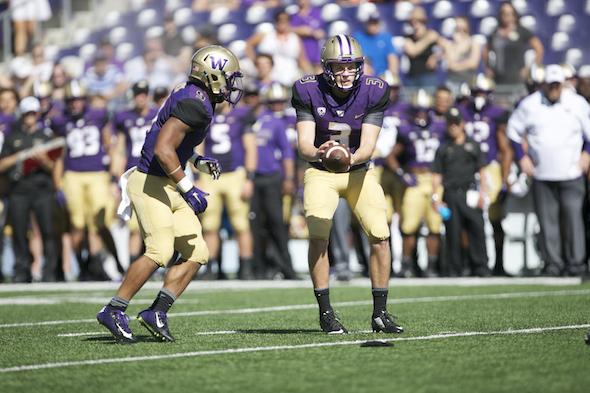 In a just college football world, the Huskies would have opened the season at home against Sacramento State, THEN traveled to Boise State. But justice has nothing to do with college football — ESPN wanted a bit of regional profile on Sept. 4, so the Huskies and Broncos bowed and scraped to the colossus, UW losing its opener 16-13 to a ranked team.

For Huskies freshman QB Jake Browning, a first game against lessers such as Sacramento State would have allowed him to understand going into Boise that the downfield pass in college was legal, available and even encouraged. That way, the Huskies would have been 2-0.

They are, however, 1-1 after laying 49-0 upon the Hornets Saturday at Husky Stadium (perhaps a small payback to the California capital for daring to keep its NBA team in 2013 when Seattle wealthies sauntered in, platinum cards glinting, only to be spurned. Take that, Sac. But we digress).

For the Huskies, having a spring game after the regular-season opener was not optimal, but useful because Browning needed to dispatch the notion that the Huskies coaches had smothered him with conservative play-calling at Boise State. The Huskies also had to develop a running game that was more than a suggestion, which they did with 218 yards rushing.

“I felt like Jake was a lot more confident throwing the ball down the field,” said TE Josh Perkins, who led receivers with five catches and 77 yards. “We were more aggressive in playcalling.”

The reason for the success was simple.

“I didn’t overthink it,” Browning said, “or think we need to do this or we need to start do that, and get nothing.”

On the first scrimmage play for Washington, Browning didn’t think but dropped back and threw hard. It went for 21 yards to WR Jaydon Mickens, the longest pass of Browning’s infant college career.

It would be swell to say a statement was made, but the drive went nowhere. In fact, the Huskies failed at fourth-and-one at the Hornets’ 43-yard line, exactly the sort of ominous start that scares FBS teams when they invite in FCS teams to take a payday beating (the Sacs pocketed $525,000).

A second drive ended in a punt. The few in an alleged crowd of 55,010 who weren’t working on their tans on a glorious afternoon began to squirm, particularly because the defense was giving up third-down conversions.

But after a scoreless first quarter, Washington finished a 63-yard drive with three on the ground from Myles Gaskin, a bodacious freshman from Seattle’s O’Dea High School, for a 7-0 lead that turned out to be the game-winner. The Huskies scored TDs on six of the next seven possessions.

The signature sequence was a 90-yard, six-play drive in the final two minutes of the first half that couldn’t have been done better by Huskies QB legend Marques Tuiasosopo. Browning was five-for-five, including three in a row to Perkins, the last 23 yards to the Sac State 1. RB Dwayne Washington took care of the rest for a 28-0 lead.

“That’s his game,” said coach Chris Petersen of the two-minute drill. “We’re trying to figure out how to make it the whole time.We saw in Boise that he does well when we spread it out and go fast.”

Regarding Browning’s game, what has emerged in the first two contests is a QB with an accurate but not especially strong arm who has touch and a quickening release. He can’t yet read a college blitz, and he ends up running a fair amount . . . rather oddly, too.

“He has such a unique speed,” said Petersen, searching for the right description. “I think I’ll use the word unique. It’s not really fast — guys somehow over-run him and he gets out of it. But it’s not really his game. We want him to be a pocket passer, to hang in there and throw some shots downfield.

“We got to work real hard on pocket presence and protection, and when to get out of there.”

Part of the problem is an offensive line almost as inexperienced as Browning. And part of is that he’s a gangly 6-foot-2 and 206 pounds, only 19, and years short of physical maturity.

That became apparent in the third quarter, when the Huskies, facing fourth-and-one at the Sacramento State six, ran a read-option play of the kind mastered by Seahawks Russell Wilson and Marshawn Lynch.

Browning faked to Gaskin, pulled the ball back adroitly and ran left to an open greensward, excerpt he fell down. He got the first down, as well as well as magnum harassment from his laughing teammates and offensive coordinator Jonathan Smith.

“I gave a hard time because he probably should have scored,” Smith said. “We’re not a read option team, but there’s a couple of instances where he can pull the ball and he did it perfect. Just has to stay up.”

Said Browning, smiling: “I don’t even know what happened. But I heard about it.”

That’s a trifle on the learning curve relative to the understandable struggle of reading defenses.

“We’re assuming going in that teams are going to pressure him because he’s a freshman,” Smith said. “A couple of times he could have hung in there longer, and instead he popped out. A couple of times when they played cover zero, he had to have an answer very quickly.”

And a couple of times he threw balls that should have been intercepted, including what became his first career TD pass — 78 yards, no less. After a quick release from a three-step drop, Browning’s 15-yard ball bounced off the hands of a leaping Hornet defender, only to drop into the hands of WR Marvin Hall, who was beyond the final defender upon receipt.

“That was a bad read by me,” Browning said. “Marvin did a good job playing the tip. He helped me out on that one.”

His teammates will be obliged to continue to help: “We got a lot to clean up,” said Smith. The tipped balls, as well as the ungainly backfield scrambles against good coverage will, in the Pac-12 Conference, result in interceptions and sacks.

But Browning demonstrated an ability to climb the learning curve in a week. The Huskies draw a better caliber of non-conference foe Saturday with Utah State of the Mountain West. By then, Browning should at least have down the art of turning the read-option corner.

He can see an example on TV starting Sunday morning from St. Louis.