Forced to use subs early due to injuries to Evans, Torres and Valdez, Seattle gets road draw in San Jose after Martins’ brilliant equalizer in 82nd minute. 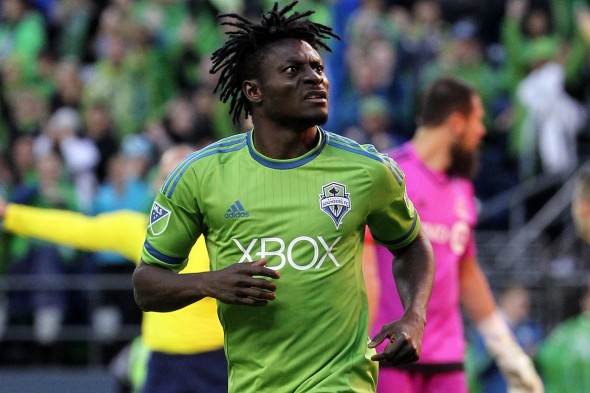 Obafemi Martins continues to show his quality, but can the rest of the roster do so as the regular season draws to a close? / Corky Trewin, Seattle Sounders FC

The Sounders used all three subs due to injury by the 60th minute and gave up another bad goal on a set piece. The team salvaged a 1-1 draw Saturday night at San Jose only through Obafemi Martins literally bending over backwards to equalize for his team.

“It’s a massive point for the team,” said Sounders assistant coach Brian Schmetzer, who managed the team after head coach Sigi Schmid did not travel to California following his hospitalization for a health issue Sept. 5. “Coming back from a goal down is never easy in this league.”

The game was cautious, with each side quick to drop defensive numbers behind the ball. The concession of three points either way would have major implications in the playoff standings. The result was a match that finished with five total blocked shots and just one save out of each goaltender.

The match certainly exacted a physical toll from the Sounders, however. First Brad Evans took a ball to the head from close range, courtesy of an accidental strike from Clarence Goodson. Evans made it until halftime, before giving way to the club debut of recent signee Andreas Ivanschitz. Next, Román Torres came down awkwardly from a contested header, landing with full force on an extended left leg. Torres crumpled to the ground and had to be helped off the field in obvious pain.

The final substitution occurred at the hour mark. Nelson Valdez, who had been dealing with apparent discomfort from several physical challenges, signaled to the bench following an errant shot, before lying down to force a stoppage of play to allow the change to occur.

“We don’t know anything about (the severity),” said Schmetzer of the injuries. “We’ll go and assess them on the way in.”

San Jose (11-11-6) grabbed the lead in the 70th minute. Seconds after subbing on for Marc Pelosi, the Earthquakes’ Matías Pérez García served a free kick into the penalty area. Lamar Neagle was outmuscled by Fatai Alashe, who fanned a header into the left side of the net to give the hosts the advantage.

The set-piece concession was Seattle’s 13th of the season. Of 32 goals allowed, 40 percent of them have been the result of a set piece. If a playbook for defending free kicks exists in the Sounders’ tactics book, it may be time to throw it out, immolate it, or nail it away in a coffin to never see the light of day again.

Seattle (13-13-3) pulled out the equalizer through a free kick of their own. Ivanschitz, renowned as a set piece specialist throughout his career, sent in a cross from the left alley, where center back Zach Scott headed the ball on frame. San Jose keeper David Bingham stopped the shot, but was unable to control the rebound, which lifted high in the direction of Martins at the six-yard line.

With his back to the goal, Martins made the only play possible. Leaning back, he lifted his left leg off the ground and redirected the ball into the center of the undefended net, stunning the home fans.

“Andreas put a good ball in from dangerous spot, Oba does the rest,” said Schmetzer of the goal, who went on to praise the Nigerian striker. “Oba’s a very good finisher. It was a world class finish.”

The goal (and an uncalled foul on Oniel Fisher in the box in the match’s closing seconds) meant a draw, and the point each way keeps the four Western Conference teams battling near the cutoff line for the playoffs in the same positions.

Asked if having to play the final half hour without an available substitute made him nervous, Schmetzer was definite in his response.

Schmetzer’s not wrong; the Sounders have the talent. The question is can the talent execute when called upon? Martins’ heroics kept Saturday’s match from warranting a sounding of the warning klaxons, but as the regular season winds down the situation is far from cheery.

Schmid estimated heading into the week that Seattle needed 10 points to cement their postseason spot. After Saturday, the Sounders need nine—three wins, or two wins and three draws out of their last five. Neither scenario leaves much room for error for a team that has been entirely too error-prone in the past three months.

Seattle will play three of its five remaining matches on the road.  The Sounders have not won a road match since March 16, long before their summer woes and midseason roster shakeup. Of their two home matches, one contest is against the mighty LA Galaxy who, while not particularly dangerous this season on the road, lead the league with 49 goals, and have outscored Seattle 4-1 across two matches.

Other important road fixtures include Sporting KC, the team that sits just below the Sounders in the conference standings, and the Vancouver Whitecaps, leading the pack in the chase for the Supporters’ Shield. Also dangerous are the Houston Dynamo who, despite occupying the number eight slot in the West, are just six points away from occupying a potential playoff place.

Substitute center back Zach Scott made it clear that the team was focused on trying to control its own destiny.

“We couldn’t come out of here without at least a point,” said Scott, who donned the captain’s armband after Brad Evans left the match at halftime. “We’ve got to only worry about ourselves at this point, we can’t look at what other teams are doing, whether it’s at home or it’s on the road. We’ve got to get points.”

Seattle travels to Vancouver, against whom they last won on the road-for a Cascadia Cup clash at 4 p.m. Saturday.