In his return after more than three months of injury and rehab, James Paxton wasn’t sharp. Mariners fielders and hitters were also no help as the Rockies won the game and the series. 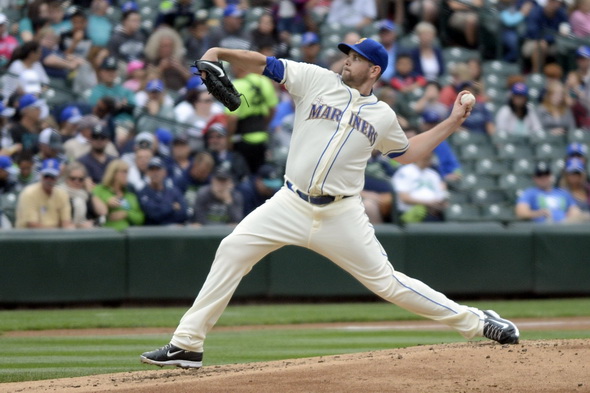 A costly error on 3B Kyle Seager in the fourth inning ended up haunting Seattle in a 3-2 loss to Colorado Sunday at Safeco. Seager’s throw to home on a bases-loaded ground ball was wide of its target, allowing two runners to score. The Mariners got two runs back in the fourth but couldn’t get much else while dropping the series to the National League’s third-worst team.

Colorado LF Brandon Barnes made one of the most incredible defensive plays of the season, and it couldn’t have come at a worse time for the Mariners. With the Rockies leading 3-2 in the eighth and Seager at the plate with one out and a runner on first, Barnes served as rally-killer on a diving catch in the corner. Seager roped a pitch down the leftfield line, what was likely to be a run-scoring, extra-base hit, but Barnes hustled over and extended himself to make the catch. Then he got up, threw to the relay man, and baserunner Ketel Marte was caught trying to get back to first base for an inning-ending double play.

James Paxton had a short outing in his return to the mound. He was pretty solid over the first three innings but showed signs of fatigue in the fourth. The left-hander ended up throwing 66 pitches over three innings, with two of his three runs earned. Paxton allowed  two hits but walked three – with four strikeouts – in his first start since May 28. The defense didn’t provide much help, as errors on Seager and SS Ketel Marte hurt. LHP Vidal Nuno was one of six relievers used, as he’s not slated to be in the rotation for the upcoming Angels series.

RF Seth Smith had a two-run single with the bases loaded in the fourth, getting the Mariners back in the game after the 3-0 hole. But Seattle had only two hits the rest of the way, and five total, as five Colorado pitchers combined to finish off the Mariners. One day after hitting four homers, Seattle ran out of offensive juice.

“I would have hoped it would have been a little better. I imagined he’d be somewhat rusty. His pitch count got him pretty quick, and we had to go out and get him.” – Seattle manager Lloyd McClendon on Paxton

McClendon was non-committal when asked before Sunday’s game about the innings limit of RHP Taijuan Walker. The 23-year-old rookie has 162.2 IP this season, his highest total at any level, but McClendon said that the Mariners “theoretically could probably take him to 180, 185 (innings).” Walker is scheduled to start Monday. McClendon would not say whether it would be his final start . . . CF Brad Miller (neck spasms) was a last-minute scratch . . . The Rockies went into Sunday with a 6-26 record against left-handed starters.

Walker (10-8, 4.70 ERA) is booked for the opening game of a series against a Los Angeles Angels team that is still holding on to postseason hope. RHP Garrett Richards (13-10, 3.71 ERA) is scheduled to start.