On her Facebook page, Delisa Lynch wrote that Seahawks OC Darrell Bevel should have been fired after the Super Bowl. She also called him “the worst play caller ever.” 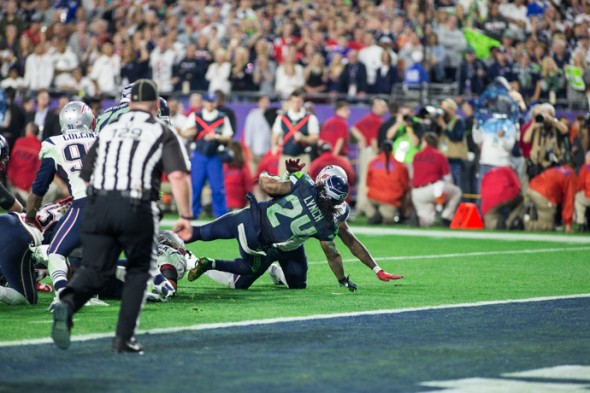 Marshawn Lynch, here coming up a yard short against New England in his final carry of the Super Bowl, has one angry mama. / Drew McKenzie, Sportspress Northwest

If Marshawn Lynch’s mother had her way, Darrell Bevell would be out as the offensive coordinator of the Seahawks. Delisa Lynch wrote on her Facebook page that Bevell called Lynch’s number on the game’s final play Sunday against the St. Louis Rams to “justify” not giving Lynch the ball at the goal line at the end of the Super Bowl. She also described Bevell as “the worst play caller ever.”

“Too the smart azz media who wrote that’s why marshawn didn’t get the ball in the superbowl, how many times did russell get sacked,” Delisa wrote. “Dont worry i will wait on the answer plus it was totally different at the superbowl the line was better than yesterday no blocking and to the offense caller who should have been fired yes i said it Fired !!! He is the worst play-caller ever the only reason he called that dumb azz play (Sunday) is to be able to justify the 1 yard that wasn’t called in the superbowl ,but most fans already figured this out .were still on a mission but i know the Seahawks staff loves that play caller more than a win ,go figure ‪#‎nfldontpayme# I love this team and will stand up to anybody who tries to destroy it boom!!!!”

Bevell did not call Lynch’s number at the end of the Super Bowl even though the Seahawks needed only a yard, but went to Lynch at the end of the Rams game, also a fourth-and-one. The Rams threw him for a yard loss, sealing Seattle’s 34-31 overtime loss in the Edward Jones Dome.

” (Michael Brockers) did an amazing job of knocking that tackle (Russell Okung) back and I just jumped on it and cleaned it up,” said Rams defensive tackle Aaron Donald. “I wasn’t surprised they gave him the ball. He’s a great runner and all he needed was a yard.”