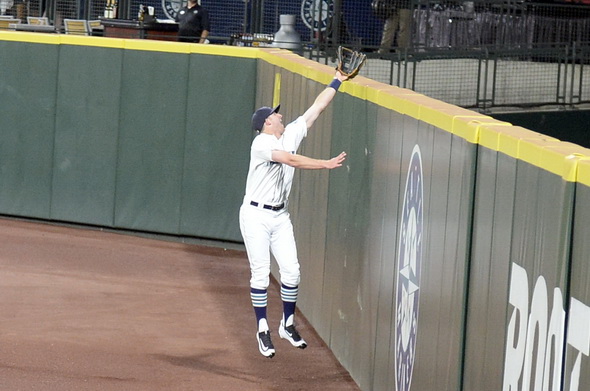 The Mariners played the part of spoiler again, taking the deciding game of the series from the Angels with a 3-1 win Wednesday night (box score). Jesus Montero hit his second home run in as many starts with a three-run shot in the fourth inning, and starter Hisashi Iwakuma had another strong start against the Angels as Seattle (71-76) concluded its homestand with a 5-5 record. Seattle is 10-5 in September, 9-3 vs. AL Weat foes.

The exchange between 3B Kyle Seager and Angels starter Jered Weaver in fifth inning didn’t have a direct impact on the game, but it was high tension. Seager apparently irked Weaver by calling a late timeout before Weaver got off his second pitch of the at-bat. Words were exchanged, home-plate umpire Brian O’Nara stepped in, and order appeared to be restored. But when O’Nara returned to his spot behind the catcher, Seager signaled for timeout again, this time with an exaggerated motion while tossing a few choice words toward the mound. After Seager was set, Weaver responded with a fastball to the shoulder blade, resulting in an automatic ejection. A couple of players wandered out of the home dugout before the incident was defused.

Iwakuma threw six solid innings with a season-high nine strikeouts, allowing four hits and the one run on a David Murphy homer. Murphy homered in back-to-back games, accounting for four of the Angels’ five runs in that span. Iwakuma improved to 8-2 with a 2.59 ERA in 13 career games against Los Angeles.

Reliever Danny Farquhar continued his remarkable late turnaround with a scoreless seventh, while Carson Smith may have thrown the most important pitch of the game, when in the eighth inning with runners on the corners, he escaped  with a third-strike slider to Angels star Mike Trout. Tom Wilhelmsen continues to thrive in the closer’s role, with a scoreless ninth makes the Fernando Rodney era feel like a distant memory.

Montero hasn’t hit very many pitchers during his disappointing four seasons in Seattle, but he has owned the Angels’ Weaver. His three-run homer in Wednesday’s fourth inning was Montero’s fifth home run in 12 career at-bats against Weaver. It also gave the Mariners the lead. Montero has a .500 career batting average against Weaver (6 of 12) but is hitting just .242 against everyone else as a Mariner. Seattle had eight hits and squandered several opportunities, with SS Ketel Marte running the Mariners out of scoring chances again – this time in the third and eighth innings.

“When you’ve got both feet planted, it means you’re ready to go. I don’t know if Derek
Jeter did that in his third or fourth year or not. I just know I was ready to pitch.” – Weaver, on why he was upset by Seager’s late timeout

Marte was a disaster on the basepaths for the second night in a row. In the third, he failed to touch second on an attempted steal that resulted in an errant throw. In the eighth, he over-slid second base and was tagged out. Both outs came after the Angels made appeals. Marte ran to third base after his third-inning “steal,” only to be ruled out when Weaver appealed and threw the ball to second . . . Seattle’s team ERA in September is 2.73, lowest mark in baseball. The bullpen, having shed Rodney in late August, had a league-low ERA of 1.55 before throwing three scoreless innings Wednesday. … The announced crowd was 16,176, marking the eighth time in the 10-game homestand that fewer than 20,000 fans showed up at Safeco Field.

Seattle has an off day Thursday before opening a three-game series at Texas on Friday. LHP James Paxton (3-4, 3.82 ERA) is scheduled to make his second start since coming off the disabled list, while Texas will counter with RHP Yovani Gallardo (12-10, 3.35 ERA).