The loss of Roman Torres for the season (knee) is the worst of several health problems in the Sounders’ back line ahead of a key match in Vancouver Saturday. 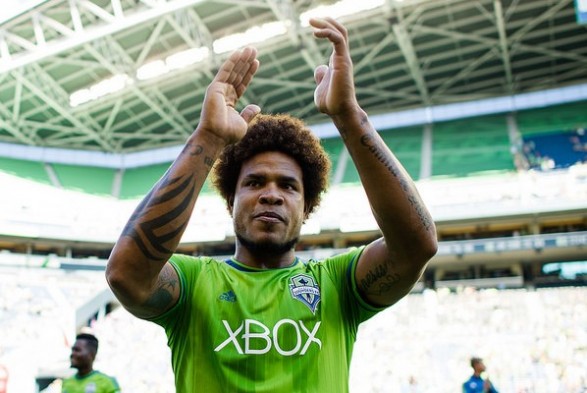 Román Torres is done for the year, and the remaining center backs will struggle to fill his shoes as they deal with injuries of their own. / Seattle Sounders FC

The Sounders are no strangers to the lineup shuffle. It’s a game they’ve played all summer, but now they must do something they hadn’t expected: Throw a card out of the deck altogether.

Center back Román Torres was ruled out for the remainder of the season with an ACL tear Tuesday. While his is the gravest injury to date, the Sounders are reeling from health issues as they prepare to face the Vancouver Whitecaps in Canada at 4 p.m. Saturday.

Torres was injured in a freak landing against San Jose the past weekend. The same match saw Brad Evans leave due to dizziiness at halftime after taking a close-range shot to the face. Nelson Valdez left at the hour mark after absorbing punishment from a physical Earthquakes back line.

While Torres is done for the year, Sounders head coach Sigi Schmid said that Evans and Valdez are expected to return for Saturday’s contest.

“(Evans) should be alright,” said Schmid Thursday. “He was cleared for training and he has to do his final heading protocol, but everything seems okay. (Valdez) got stepped on, in the same area where he had a contusion on his ankle. He feels alright, he’s pretty good about getting fitness work in when he’s not on the field.”

With Torres out of the lineup, it is unclear if Evans will continue to play in the midfield, or if he will revert to the center back role he played before Torres’ acquisition in August.

Schmid suggested that Evans might alternate between positions for the remainder of the year.

While Evans will likely prove himself serviceable in any position he plays,  the question is who will be beside him when playing in defense.

Zach Scott has been playing for the past several months with a fractured bone in his foot. Regular starter and 2014 MLS Defender of the Year Chad Marshall, meanwhile, missed practice Thursday after receiving a cortisone injection.

“He’s had a little bit of tightness, so they gave him a cortisone shot,” said Schmid, who went on to explain that Marshall’s absence was typical following such a procedure. “Sometimes it takes a day or so for the shot to work.”

So for those keeping score at home, of four center backs, one has a blown out knee, one spent the week going through concussion testing, a third has a broken foot, and the last has a muscle issue.

Forwards? A similar story. Valdez has been kicked in the shins a fair amount, and had his first practice of the week Thursday. Still, the Paraguayan looked like he would be capable of contributing Saturday. Clint Dempsey is still trying to return to full strength after a hamstring pull, a recovery that can’t have been helped by having to play the full 90 in San Jose when Seattle ran out of subs. Expect to see Dempsey take the pitch.

Even Schmid had trouble, being absent from the past two matches after a four-day hospitalization for a “health-related issue,” according to a statement from the team. Schmid seems to be fully recovered and will make the trip north with the team.

One bright spot on the injury front is that Obafemi Martins is fine. With Martins scoring five of the team’s nine league goals since his own return from injury Aug. 16, he will be counted on heavily.

The other good news is that Osvaldo Alonso’s one-match suspension for accumulated yellows has passed, and can re-take his place in the center of Seattle’s midfield.

“I’m very happy to be back,” said Alonso, who (feel free to note the familiar refrain) has missed 12 matches. “I’m healthy, 100 percent.”

Seattle will need Alonso’s physical presence to keep from being bullied in the center, especially with the center back slot looking like a triage station.

Saturday also marks the final Cascadia Cup clash of the season. The cup is contested between Portland, Seattle, and Vancouver yearly based on the teams’ MLS records against one another.

Portland has already been eliminated. A draw or a win on Saturday means that the Sounders will hoist the cup for the first time since 2011. The Whitecaps, meanwhile, can capture their third title in a row with a victory.

Schmid has his eyes on a bigger prize, however.

“I haven’t really talked to them about that,” said Schmid. “For us, it’s all about establishing our ability to get results on the road. If the Cascadia Cup comes along with it, we’re certainly going to take it.  But we’re not going to put ourselves in a situation where winning that takes us away from our focus, which is to get to the playoffs and make a run at the MLS Cup.”

If the Sounders (13-13-3)  do as he wants and get a road result, they’ll bring the cup home as a bonus, apart from keeping to points away from Western Conference leader (15-10-3) and No. 1 in the Supporters’ Shield race. 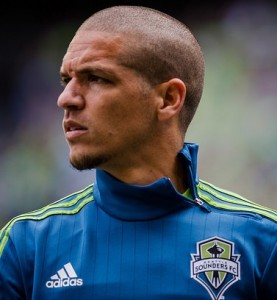 Osvaldo Alonso may not smile on the pitch very often, but soon he’ll have a big reason to do so off it. He has not seen his father in eight years since Alonso defected while traveling with the Cuban national team at the 2007 Gold Cup. He will get a chance after his father was approved for a travel visa thanks to thawing US-Cuba relations.

“I think he’s coming in two weeks,” said Alonso Thursday. “I’m very excited to see my dad again. It’s very tough when you have family down there that you don’t see, but now I have the opportunity. He’s my idol. I grew up seeing him play soccer.”

Alonso said respect and admiration for his father was a major reason he took up the game.

Alonso’s story, while not unique, is a window on the intersection of sport and international politics. A U.S. citizen since 2012, the fiery midfielder has never been eligible to play for the U.S., since his appearances for Cuba would necessitate the Cuban football association contacting FIFA and releasing him to do so.

At 29, Alonso’s shot with the USMNT may have passed by, causing wonder as to how Alonso might have contributed if relations had been eased sooner. For a father, at least, the political developments between longstanding enemies presents a chance to see the player—and man—that his son has become.