After an inception, Jake Browning completed 12 passes in a row to break open the game against Utah State, and demonstrate a rapid growth rate for a freshman QB. 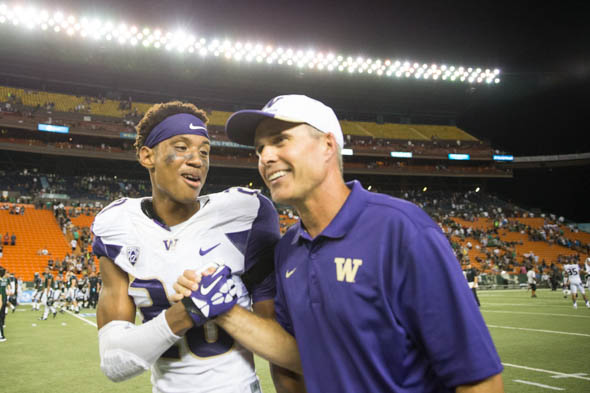 CB Kevin King, here with coach Chris Petersen after the win over Hawaii a year ago, had his third interception in three games Saturday. / Drew McKenzie, Sportspress Northwest file

When a game had a fat-guy touchdown, another TD by the placekicker off a faked field goal, a 96-yard interception return NOT for a touchdown followed in two plays by a 97-yard fumble return FOR a TD, it was easy to think you were watching an episode of “The Simpsons.”

The slapstick, however, was merely the amusing short subject before the feature: The debut of the football version of “The Natural.” Starring Huskies QB Jake Browning.

The freshman seemed to blossom in his third career game, making all manner of throws that blew up into 368 passing yards on just 22 completions Saturday afternoon in Washington’s 31-17 win over Utah State State. Even his worst ball, an overthrow turned into an interception early in the third quarter, was made into a weapon — 12 consecutive completions to demonstrate the key aspect of the maturing QB.

“Dumb play by me,” he said of the pick. “But you have to have short-term memory.”

The ability to forget the error was critical, because the element of contest lingered at that point, a 17-10 lead over the guests from the Mountain West Conference. By the time the next two drives were over, it was 31-10. Both TD passes were Browning at his infant best.

He struck with RB Dwayne Washington on a 33-yard touchdown pass that leaped from the playbook: A quick drop well-protected, and a ball delivered in stride at the goal line as Washington blew past an over-matched linebacker. Eight plays, 78 yards.

On the next possession, the Huskies went six plays and 66 yards before Browning navigated the final three yards in a Wilsonian manner familiar to Seahawks fans.

After a play-action fake into the line did nothing, Browning was under heavy blitz pressure when he turned his retreat into a reverse pivot. That bought time to roll right. Then he lofted a floater over two defenders that found an astonished backup tight end, redshirt freshman Drew Sample, in the end zone with nothing else to do but catch his first career pass for a TD.

“He does a nice job with his feet and he’s got a good touch out on the perimeter,” he said. “He’s a very, very accurate kid. I thought they did a nice job of putting him in situations to be very successful.”

The Huskies coaches indeed set up Browning, although it was borne of a bit of desperation. They couldn’t run the ball worth a lick, thanks in part to a decision during the week to shuffle the offensive line.

Only C Siosifa Tufunga remained from the line that beat Sacramento State 49-0 a week earlier.

“From my vantage point, they did a really nice job,” said UW coach Chris Petersen. “For the most part they protected Jake well enough for him to set his feet and throw the ball down downfield.”

“I though we could have gotten the run going a little bit earlier.”

But in this game, the QB, a freshman, carried the team — helped by some trickeration that included a touchdown run from PK Tristan Vizcaino, who in the second quarter took a direct snap for a field goal attempt and scooted two yards for a 17-3 lead.

“At practice, we got stuffed almost every time,” Vizcaino said, smiling. “It was good that it worked out this time.”

More remarkable was Browning’s assertiveness, two weeks removed from somewhat of a shaky start at Boise State in a 16-13 loss. His ability to direct a complex offense was remarkable.

“We’re trying to push that fine line of being creative enough to get (defenses) off balance, but not so much we’re confusing ourselves. We’re running a lot of guys on (the field). There’s a lot of stuff going on. I think it will get easier for them. I don’t think the games will get easier. But at least they know what they’re doing.”

One aspect he doesn’t have to worry as much about is the defense.

Despite missing perhaps their best athlete, FS Budda Baker, who left after the first series with an ankle injury of unknown severity, the Huskies ran their string of consecutive shutout quarters to seven before the Aggies put up 10 in the second quarter, including a one-yard touchdown run by 300-pound nose guard David Moala.

But the Aggies were held to 252 yards of total offense. Their only second-half score came after defensive back Jon Rocquemore scooped up a fourth-quarter fumble by backup QB Jeff Lindquist and went 97 yards.

LB Victor Azeem had 12 tackles and Kevin King, moved back from safety to cornerback, had his third interception in three games.

The defense looks ready for Pac-12 play to begin next week against Cal, which beat Texas 45-44 on the road Saturday. The offense? Less so. But with the improvement in Browning’s play, intrigue grows.

“It’s slowing down a little bit,” he said. “I still got a lot to learn from the tape.”

Learning curves are never smooth. But sometimes they can be shortened.