Sounders take it to the ‘Caps, MLS leaders

Making his first start, Andreas Ivanschitz notched his first goal and the Sounders their first road win since May 16 with a 3-0 win over the Whitecaps that also secured the Cascadia Cup. 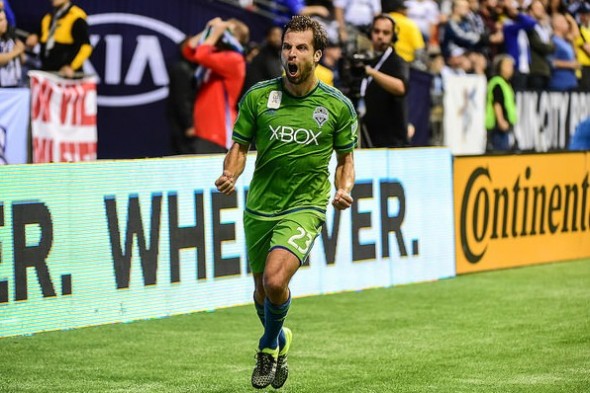 After having to deal with persistent injuries during a full week’s preparation, the Sounders came out and executed Saturday night in Vancouver. Andreas Ivanschitz scored the game-winner in his first start for Seattle in what turned into an emphatic 3-0 victory against the Whitecaps.

“We continue to show that we’re a good road team, which we’ve always been,” said Sounders coach Sigi Schmid. “Today was a good road victory for us.”

The Sounders spent most of the first half looking as if they had been told to play for a draw. Despite controlling the ball nearly 67 percent of the first frame, Seattle (14-13-2) managed just four shots.

Bad mistakes from left back Oniel Fisher nearly cost the Sounders. In the 15th minute, an attempted back pass from Fisher overshot Chad Marshall, falling to the feet of Vancouver forward Octavio Rivero. Rivero dribbled in to the penalty area, only to be foiled by a diving clearance from Stefan Frei. In the 42nd minute, Fisher misjudged a ball in the air, allowing Cristian Techera to run in uncontested. Frei once again proved his worth, stopping Techera’s attempt to keep the clean sheet.

Ivanschitz’s club debut goal came at the death of the half. In the 45th minute, Obafemi Martins picked up a pass at the top of the attacking third, before chipping a through ball to an onside Ivanschitz on the left wing. Ivanschitz trapped the ball on the bounce and fired it past Vancouver keeper David Ousted to make it 1-0.

“You have to go out there and give your best,” said Ivanschitz. “That’s what I did. It was my first start since four months, so I was a bit nervous, but well-prepared.”

Seattle added to their tally in the second half. In the 71st, Gonzalo Pineda found space on the right wing and played the ball towards a closely marked Nelson Valdez. Valdez tapped a back heel to Clint Dempsey, who served it back to Pineda. Pineda kept his composure, sidestepping a defender before banking a shot off the left post to double the visitors’ advantage.

Dempsey notched his second assist in the 87th minute. A long run with the ball took him into the box, but into too narrow of an angle to take a shot. Instead, Dempsey rolled the ball to a wide open Obafemi Martins, who converted into equally wide open net to provide the icing on the cake.

If Martins’ sixth goal in as many games was the icing, Stefan Frei’s solid performance in net was the flour. Frei recorded seven saves and intercepted two crosses to post a clean sheet. The shutout was Frei’s 10th, a career high for the Swiss keeper, whose 15th minute denial of Rivero will almost certainly be in contention for a sixth MLS Save of the Week award.

“I thought (the defense was) pretty resilient,” said Schmid. “We blocked some shots. Stefan, you get used to him making key saves, and he made a couple of big saves in the first half.”

The stout defense, stellar keeping and flurries of offensive brilliance brought to mind the Sounders team that once sat in Vancouver’s place atop the race for the Supporters’ Shield, before injuries, national call-ups, and disciplinary woes stalled what was set to be a banner year. If the Sounders can keep the flame lit, then Seattle might just make that playoff push they’ve been talking about for the past two months.

Still, injuries continue to be a problem. Erik Friberg did not play due to an injury picked up in training, and Osvaldo Alonso left the match early after a characteristic hard-nosed challenge resulted in an injury to his ankle and knee.

Schmid did not have any update regarding Alonso’s status.

The three points mean that Seattle has put itself in a good position to make the playoffs in the Western Conference, particularly after seventh-place San Jose’s 3-2 loss to NYCFC Wednesday.

Seattle has a short turnaround before facing the Whitecaps again, this time in the final CONCACAF Champions League group match at 7 p.m. Wednesday at CenturyLink Stadium. Seattle must win to advance to the knockout stages of the competition, while Vancouver could still make it past the post with a draw, depending on a road match in Honduras.

Seattle claimed its first Cascadia Cup since 2011. The Sounders made themselves relevant again with a gutsy 2-1 win against Portland on Aug. 30, before their forceful final effort at BC Place Stadium.

““It’s huge, I can’t remember the last time we won it,” said defender Zach Scott. “ It’s something we are proud to take home and I know to the fans, it’s a big deal to them.”

A big deal indeed. So big, in fact, that when the MLS attempted to file a trademark claim for the name of the trophy in 2013, the main supporters’ groups for each team banded together to oppose the league’s attempt to claim the official rights to the competition.

The Cup is Seattle’s fourth since the competition began in 2004. Vancouver has five titles, while the Portland Timbers have three. Seattle’s win on foreign soil prevented a three-peat for the Whitecaps, whom Seattle keeper Stefan Frei described as “arguably the best side in the league right now,” following Saturday’s match.

Scott acknowledged that the silverware took a back seat to Seattle’s league goals.

“Any trophy you win is fantastic,” said Scott. “But the three points in the league are key.”