The Seahawks trailed 10-0, rallied to take the lead, but a late interception and a controversial ruling on a fumble set up Seattle’s 27-17 loss at Lambeau Field. 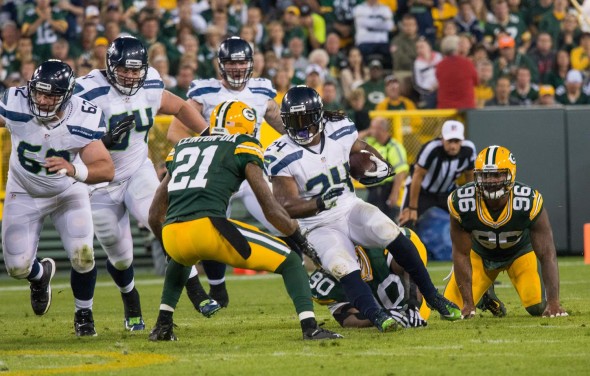 This year may turn out to be different, but in their 40-season history the Seahawks have never made the playoffs after starting 0-2. They are now faced with that grim statistic after losing to the Green Bay Packers 27-17 Sunday night at Lambeau Field in a game they could have — and probably would have — won had they not made so many mistakes, starting with gifting Green Bay 10 points off penalties (12 men on the field twice) and ending in controversy after a late Russell Wilson interception (box).

After trailing 10-0 and 13-3, the Seahawks stormed back behind Wilson to lead 17-13. Green Bay rallied for a 24-17 edge with a little more than six minutes remaining in the fourth, but the Seahawks still had a chance — until Green Bay’s Jayrone Elliott made a one-handed interception of a short Wilson pass over the middle at the Seattle 42.

Elliott, though, fumbled and, in the ensuing scramble, Seattle guard Justin Britt emerged from the pile with the ball — even handing it to an official. But Green Bay was awarded possession, to Pete Carroll’s astonishment, and turned the exchange into Mason Crosby’s fourth field goal and Seattle’s first 0-2 start since 2011.

“Justin Britt had the football,” Carroll insisted. “I was disappointed in the way that turned out. They (the officials) declared that Green Bay had the ball, but they didn’t. Justin Britt did a great job to get that ball back.”

The Seahawks had a terrible first half offensively, trailing 10-0 before gaining a single yard. In fact, when Green Bay took a 10-0 lead, Seattle had a -3 yards in total offense.

The Seahawks failed early to establish a running game as Marshawn Lynch gained only 29 yards on 12 carries. But in the second half, Wilson started making plays with his legs, the big factor in his two touchdown passes, five yards to Fred Jackson and 13 yards to Doug Baldwin. Midway through the third quarter, Wilson had better stats than Aaron Rodgers, but the late interception left him with a 91.8 passer rating on 19 of 30 completions for 206 yards.

Wilson — or offensive Darrell Bevel — made almost no use of TE Jimmy Graham, targeted just twice. Carroll insisted postgame the option was there, but Graham finished with one catch for 11 yards.

Lynch, consistently smacked down before he could get going, with 41 rushing yards on 15 carries while Wilson ran for 78 on 10 with a long gain of 17.

The Seahawks accumulated 324 yards of total offense and averaged 5.7 yards per play to Green Bay’s 5.6.

The Seahawks handed the Packers 10 of their first 13 points in the first half as a direct result of penalties, including three offsides calls on DT Michael Bennett plus a 52-yard pass interference penalty on CB Richard Sherman that set up a Crosby field goal.

The Seahawks held Rodgers to 249 passing yards, but couldn’t keep the Green Bay quarterback from going 9-for-9 in the fourth quarter when the Packers won the game with 11 points to Seattle’s zero. Rodgers threw touchdown passes to James Jones and Richard Rodgers and still hasn’t been picked off at Lambeau Field since 2012.

The Seahawks have allowed 30.5 points per game in their first two contests after allowing 15.9 last season.

“We put ourselves in position to win this game and played some really good ball. We had our chances but gave them the ball on the screen (Wilson’s interception) and they put it away. They did a nice job of finishing. Right now we’re not playing good enough ball. We’re not as clean as we need to be. We need to go home and start over again and get this thing rolling” —  Carroll.

“We had a great opponent tonight, but we had a great fourth quarter. Teams coming in here know it’s going to be a tough night” — Aaron Rodgers.

LB K.J. Wright was ejected with 6:42 remaining in the game when he yanked the helmet off a Green Bay player . . .The Seahawks, who had beaten Green Bay three consecutive times (including playoffs), are 9-7 all-time against Green Bay, including 1-5 at Lambeau Field . . . Seattle’s only win there came in 1999, Mike Holmgren’s first season as head coach . . . Seahawks are now 13-2 in prime-time contests under Carroll and 19-12 all-time on Sunday night.

The Seahawks play their first game of the season at CenturyLink Field next Sunday when they host the Chicago Bears. Kickoff is scheduled for 1:25 p.m. on CBS.