Three NFL teams have made the Super Bowl after starting a season 0-2, but the Seahawks have never even reached the postseason after dropping their first two games. 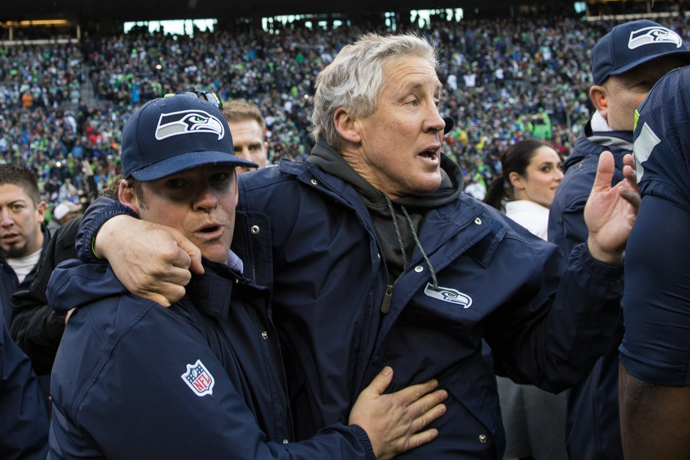 Given the outcome at Lambeau Field Sunday night, it will come as scant consolation to thousands of mourning 12s that the Seahawks made some positive NFL history in their predictable, could-have-been-avoided, 27-17 loss to Aaron Rodgers and Green Bay Packers. The Elias Sports Bureau, as only it can, came up with the following nugget:

“Seattle has now held a lead in each of its last 50 regular-season games, corresponding precisely to Russell Wilson’s time with the team. That ties the longest such streak in league history. The Indianapolis Colts set that record from 2003 to 2006 (with Peyton Manning at quarterback).”

In addition, the Seahawks also had a lead in every postseason game that Wilson has played.

The current news, though, is less enthralling: The Seahawks have not been able to protect that lead in the fourth quarter in each of their past three games (including playoffs), losing Super Bowl XLIX when Tom Brady shredded them on a game-winning drive before falling to the Rams (Nick Foles) and Packers (Rodgers).

“It’s disappointing that we didn’t finish,” Carroll said after the Seahawks failed to hang on to a 17-13 lead and was outscored 11-0 in the fourth quarter. “We’re usually good at protecting leads.”

They have also been good under Carroll at overcoming late deficits, thanks to Wilson’s NFL-leading 15 career fourth quarter/overtime comebacks. But Seattle’s last two series Sunday ended in turnovers. Besides Jayrone Elliott’s interception with six minutes to play, Micah Hyde recovered a fumble by Fred Jackson with 22 seconds left.

With one key player – Kam Chancellor — out of this mix, the Seahawks this season are allowing 30.5 points and rank 29th of 32 teams.

The Seahawks are not likely to change their stance on Chancellor, nor does it seem Chancellor is willing to honor the final three years of a contract he was once elated to sign. But Chancellor has proved the point that the Seahawks’ defense, even with Richard Sherman, Earl Thomas, Michael Bennett and Bobby Wagner, is not of championship quality without him. Far from it, in fact, given the ranking.

Since 2000, Mike Holmgren’s second year with the franchise, the Seahawks have allowed more points in the first two games of a season only once. That happened in 2008, Holmgren’s final year, which ended with a 4-12 thud.

That Holmgren team surrendered 67 points in its first two, 34-10 and 33-30 losses, respectively, to Buffalo and San Francisco. Most points allowed, first two games, since 2000:

When the Seahawks sent C Max Unger and a fourth-round pick to the New Orleans Saints last March in exchange for TE Jimmy Graham, the idea was that the three-time Pro Bowler would become a primary weapon in the Seattle offense, and specifically a great red-zone target for Wilson. Carroll said so:

“The opportunity to get a player that can make these kinds of plays that we’ve seen Jimmy Graham do for a number of years really got us excited. In complementing the rest of our team, we think he’s just a fantastic target that we can implement in a number of ways.

“He’s a big receiver, plays big, makes plays in a crowd, makes plays on top of guys. He’s a very effective player in the red zone.  He has been a terrific, consistent scorer. We’re just going to fit it into our offense and make him hopefully a very complementary part of it.”

None of that has happened.

Except for the second half of the St. Louis opener, when Wilson finally noticed Graham dressed in Seahawks togs, Wilson has largely ignored him. Sunday at Lambeau Field, Wilson targeted Graham twice. He finished with one catch for 11 yards and refused to be interviewed after the game, in which Wilson targeted backup tight end Luke Willson four times.

Among tight ends who received Pro Bowl nods last year, the $40 million Graham has been the least utilized this season. New England’s Rob Gronkowski has already been targeted 21 times by Brady to Graham’s 10. Greg Olsen of Carolina and Jason Witten of Dallas have both been targeted 17 times.

“It’s frustrating,” Carroll told 710ESPN Seattle Monday. “We have to find our way to get that done.”

Starting with Graham’s first Pro Bowl season in New Orleans, this is how much Drew Brees relied on him through the first two games of each season vs. how Seattle has used him:

“I wish I could have gotten to him a couple more times,” Wilson said. “We’re looking for him, for sure.”