After a bad start, naturally, coach Pete Carroll sees no reason to panic: “Sometimes it has to get way hard before it gets really good.” 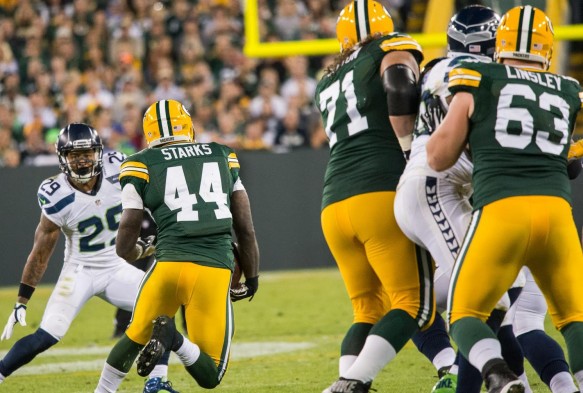 As with a high tide on a low beach, panic begins to creep into an NFL fan base at 0-2. For the 12s whose feet are a little damp, Pete Carroll offered up a message Monday.

“Sometimes it has to get way hard before it gets really good,” he told reporters, explaining once again less than 24 hours after the loss in Green Bay that the decision on whether the NFL world in 2015 is made of cheese has not been made.

Even though there was, from a distance, little surprise in the 27-17 loss at Lambeau Field, given the bruising the Packers took in three consecutive previous trips to Seattle, an 0-2 start is a startler to newbie fans unused to life in the NFL streets instead of the penthouse.

Discomfort is not without reason.

Since 1990, the first year in which six teams from each conference qualified for the postseason, 14 percent of teams starting 0-2 went on to make the playoffs, according to Elias Sports Bureau.

Then again, the Seahawks beat some tall odds in 2010 in getting to the playoffs at 7-9, then clocking defending Super Bowl champ New Orleans. They also have pulled off 15 triumphs from fourth-quarter and overtime deficits, and last season danced on the heads of doomsayers who said the Seahawks were done at 3-3.

Carroll is familiar with this terrain.

“To play at the level we’ve played at for the last three years,” he said, “we’ve done lot of things really well. You have to, because you’re challenged at every turn. There’s a lot of fine-tuning to get that done. It’s very challenging. We’re in the fine-tuning of it.

“Not getting started well doesn’t mean we’re not going to finish well.”

Finishing well starts with the Chicago Bear at 1:25 p.m. Sunday at the Clink, the home opener for numerous first-time Seahawks who will enjoy for the first time what Bette Midler may have referenced when she sang about the wind beneath her wings.

Not surprisingly, much of finishing well begins with Russell Wilson, who in the second half Sunday appeared to remember that the thing that sets him apart from other NFL QBs is running run fast, hard and often.

Because every defense is taking cues from the Rams and Packers in piling up scrap iron and heavy furniture in front of RB Marshawn Lynch.

“People are loading up,” Carroll said of the pursuers of Lynch, who had 41 yards on 15 carries behind an offensive line still learning how to block the run as a group. “What’s necessary was Russell needing to get going too, which he did in the second half. It’s all mixed together, all a part of the threat. It was much more a priority that Russell rushed for (78) yards.

“Makes it harder to zero in on Marshawn.”

Wilson had 10 carries, some scrambles, some read-option keepers and a couple of naked bootlegs, all necessary to do what Seattle needs. A year ago he set a career high in yards (849) and attempts (118), and his 7.2 yards per carry average led the NFL. But for the 2015 season’s first six quarters of the season, he seemed to run out of necessity, not opportunity.

Carroll said the change was ordered.

“We went into the game,” he said, “knowing he would do that.”

The Seahawks also discovered in the first half that their cobbled-together offensive line could also do some pass protection.

“Much improved,” he said. “We had a real improved pocket in the second half last week too.”

Run blocking was another story. In his second career start, C Drew Nowak was man-handled by Packers B.J. Raji, a week after being blasted by the Rams DT, Aaron  Donald.

“It’s been very demanding,” Carroll said of Nowak. Of the run blocking, he said. “It’s just growing. We have s very young group. (Lambeau) was a great setting for us to survive, make it through, with the crowd. We’ll just get better because of it. It will be nice to execute at home.”

As far as 0-2, Carroll said he wasn’t leaning on the 3-3 start a year ago as much as the cumulative weight of previous trials.

“It’s not necessarily about last year,” he said. “It’s just that there’s always stuff you go through and you have to find yourself, find a way. I like the (opponents) to learn that, but sometimes you got to learn it yourself.

“I know you like to see everyone roll perfectly through this thing, but it’s not like that. We were 3-3 last year; everybody’s wondering, ‘What’s going on?’ And we hadn’t found our stride yet. Here we are at (two losses). We’ll see what happens.”

Starting Sunday. Come in from the ledge, 12s, and bring the vodka bottle with you. The season now gets compelling, because the Seahawks are doing it the hard way.