Don Larsen, who pitched a perfect game n the 1956 World Series, reflects on his battery mate, Yogi Berra, the Yankees great who died Wednesday at 90. 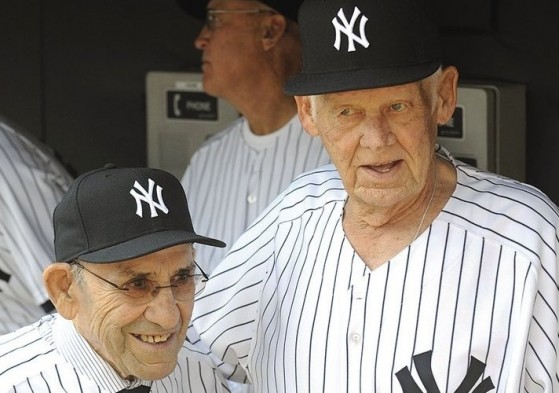 POST FALLS, ID. — The photograph of Yogi Berra leaping into the arms of Don Larsen after the final pitch of Larsen’s perfect game in the 1956 World Series remains one of the most famous sports images of all-time. Wednesday, Larsen shared memories about Berra’s leap after learning of his former catcher’s death at 90.

“He was pretty heavy!” Larsen recalled. “With all that equipment on, he was 190 pounds. He almost knocked me over!

“It was all right. We had all winter to rest up.”

Berra, the Hall of Fame player and New York Yankees icon, died Tuesday night of natural causes at his New Jersey home. Larsen, 86, recovering from a broken hip, is at a medical facility in Post Falls near his home in Hayden Lake, ID.

Larsen said he never shook off Berra’s signals one time during the only perfect game (or no-hitter) in World Series history. Larsen’s reasoning was simple.

Larsen played with Berra on the Yankees from 1955-59. Larsen said Berra worked diligently with legendary Yankees catcher Bill Dickey to develop into “one of the better” defensive catchers in baseball.

“It’s a long relationship, ya know,” Larsen said. “It goes back a ways. It takes time to build up those types of relationship. It was a lot of fun along the way. Good times.”

Berra was long known for his unusual comments, such as “It ain’t over til it’s over,” “It’s déjà vu all over again” and “No one goes there anymore – it’s always too crowded.”

“I still get a chuckle out of reading those things,” Larsen said.

For the most part, however, Larsen said Berra “was low-key. He never got that excited. He handled it well, the good and the bad.”

Larsen and Berra will be linked forever by one historic day almost six decades ago. Larsen, a journeyman pitcher who has always been modest about his famous accomplishment against the Brooklyn Dodgers, said everyone has done something that should make them proud.

Berra, to be certain, had more good days than most.