Chancellor’s return was welcomed by many. But he can’t talk his way around having made his job and the job of the team much harder.

The Seahawks’ long summer nightmare is over — Kam Chancellor is back. / sportswithswartz.com

As far as Pete Carroll is concerned, the first two games of the regular season were just extensions of the exhibition season.

“We really feel like this is the start,” Carroll said after Kam Chancellor left the podium at the Seahawks training facility Wednesday afternoon. “Maybe nobody else does. I don’t really care about who else has an opinion about that.”

Insofar as it is his job to do whatever it takes to convince his players to win the next 14 games, Carroll is entitled to say whatever he thinks will make it so. Insofar as the NFL is concerned, its opinion does count. By all indications, including the published standings, the league claims the Seahawks are 0-2.

If the Seahawks miss the postseason by one game, or make it, but must travel to Green Bay in January for a playoff game, well, then we’ll have to ask questions about the 0-2 “preseason.” And we’ll be asking Chancellor, not Carroll.

Because the Seahawks’ adverse circumstances will be on him. One of which includes his replacement whiffing on the game-tying touchdown in the opener (game five of the exhibition season?) in St. Louis that the Rams won in overtime.

Chancellor has yet to explain himself, because Wednesday’s presser at VMAC was an exercise in obfuscation and avoidance.

Asked what happened Tuesday to get him end his nearly two-month holdout despite no public change in the club’s position, Chancellor said, “I pray all the time.”

So God told him, “Go forth and smite Bears QB Jimmy Clausen”?

Wait a minute. I believe it was God’s son who was quoted as saying, “Render unto Caesar the things that are Caesar’s, and unto God the things that are God’s.” Which I interpret to mean: Play ball unto the the terms given by the new Caesar, Paul Allen.

So really, what gives? Again, Chancellor waffled about why he put his teammates and club through a maneuver that had no good outcome.

“That’s between me and business,” he said, not identifying what “business” was. “I would rather handle that after the season when the time is permitted. Right now, it’s back to playing football.”

Nor would Pete Carroll offer insight into what might have changed in the last 48 hours.

“I’m not going to talk about anything about any of the business of it,” he said. “You’ll get nothing from us.”

Not surprising, because Carroll is always about the moment and the future, never the past. His job is to make sure things look good and feel good. In fact, he accompanied Chancellor to the podium, not necessarily as a minder but more as a photo op, perhaps to portray management’s forgiveness for Chancellor’s contractual transgressions. 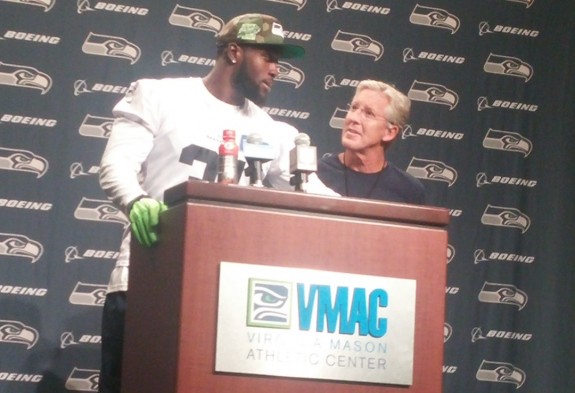 Whether management is in a forgiving mood — fines, forfeited bonus and foregone paychecks add up to more than $2 million, at the club’s option — will leak out when it’s time to deal with the 2016 salary cap, Chancellor’s place under it, and what promises may have been made to break the deadlock for 2015. Carroll, meanwhile was in charge of spreading happy-happy, joy-joy, in which he has a seventh-degree black belt.

“Kam’s going to be with us for a long time,” he said. “We hope he’ll always be a Seahawk, and that’s all we’ve ever thought of it. Nothing’s ever changed in that. Really, nothing’s ever changed in his thought of that, either. We’re very much in concert about that. We look forward to a really long relationship. It’s been fantastic until now, and we’re going to just continue it.”

Carroll is desperate to get everyone’s focus off the 0-2 start and the Chancellor fallout, then blast the 0-2 Chicagos so hard that it will wake George Halas from the dead. The task is so in his wheelhouse that he felt compelled to brag about it.

“I’m pretty good about this — you’re looking at (the solution),” he said. “What’s happened is already gone, and there’s really nothing that we can do about that. How are we going to respond now? That’s what’s important.

“I’m pretty disciplined about that, which I need to be because I’m asking all of these (players and coaches) to do that. We’ve been doing that for years. I think it’s part of what gives us a chance to get back on track and re-create the things that have been positive for us.”

So Carroll is doing what he does best, and now it’s up to Chancellor to do same. Carroll reported that Chancellor weighs 226 pounds with body fat of six percent, and worked intensely with a personal trainer. But there is no training that prepares a player for the game’s violence and suddenness. Just have to get used to it.

Chancellor’s fitness and ferocity suggest he’ll be OK. But given the inevitable urgency he will feel to make up for lost time, there is the prospect that his hamstrings will snap up like a pair of window shades.

It’s part of the cost of doing business the way he did it. Many fans who care only about the immediate W’s are thrilled about his return regardless of consequences. But Chancellor has made his job, and the team’s job — getting back to the Super Bowl — harder.

Given management’s refusal to bend before games were lost, I asked him whether he over-valued his place on the team.

“No, I didn’t overvalue my place,” he said. “I just go out there and play ball. I just like to show people a hard worker, a physical football player, someone who loves to play the game.”

For four years, he has shown people all those virtues. They responded with universal praise, and he signed on for handsome compensation to do it for three more years. Why he chose to pause for two months, at great potential cost to himself and his team, remains a mystery.

Carroll has the latitude to ask for a figurative re-start. Amazingly, Chancellor sees himself in a position to offer forgiveness.

Well, that’s certainly a relief. Just as it was to know Chancellor didn’t over-value himself.