Errors abounded as Washington fell too far behind and lost its Pac-12 season opener to Cal 30-24 Saturday at Husky Stadium. 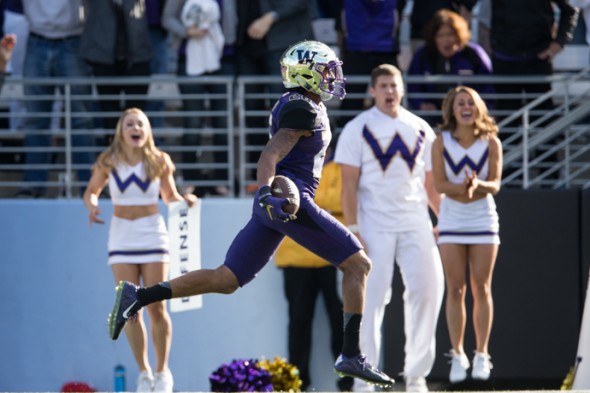 Given an opportunity to engineer a remarkable comeback win, freshman QB Jake Browning’s inexperience instead got in the way, a late interception ensuring California’s 30-24 victory over Washington Saturday at Husky Stadium (box). The Huskies, who fell to 2-2 with the meat of their schedule imminent, also self-destructed with four other turnovers and poor tackling that helped Cal beat UW for the first time since 2008 and for the first time in Seattle since 2005.

Trailing 27-21 midway through the fourth quarter, the Huskies had the ball at the Cal 40 and a chance to take the lead. But a fumble by RB Dwayne Washington resulted in a recovery by Cal. The Bears drove for a 32-yard field goal by Matt Anderson and a two-score advantage. Trailing 30-24 after a Cameron Van Winkle field goal with 3:57 left, Washington still had a chance with three minutes to play. But an ill-advised Browning throw on third down was intercepted. The young quarterback pounded his fists on the field in frustration after the pick.

Browning, who didn’t complete a pass until 5:43 remained in the second quarter, went 17-for-28 for 152 yards, no touchdowns and two picks a week after setting a UW freshman record with 368 passing yards against Utah State. The Bears sacked Browning five times and largely took away his downfield options, except on a 65-yard drive in the third quarter when Browning went 5-for-5.

Washington scored touchdowns on a 14-yard run from Dwayne Washington and a two-yard run on a fly sweep by WR Chico McClatcher. D. Washington produced a remarkable effort on a single drive in the first quarter when he had runs of 12, 15, 27 and 14 yards to account for every yard of the drive and the TD.

The Huskies twice stopped Cal on fourth down, including once at the goal line in the first half. But Washington consistently didn’t wrap up on tackles, leading to a number of big Cal plays.

Play of the game for Washington came in the third quarter when Sidney Jones scooped up a fumble and took it 70 yards for a touchdown, pulling the Huskies within 27-21.

The Huskies sacked All-America candidate QB Jared Goff five times, but he still threw for 342 yards and two touchdowns. Those TD passes were the first allowed by the Huskies this season. Goff tied Kyle Boller for most TD passes in a Cal career at 64.

“We did what we needed to do and made the plays we needed to make. It means we’re 4-0. Washington is really well coached and will probably become one of the best defenses in the Pac-12. Today, the turnovers were huge.” — Sonny Dykes, Cal head coach.

The Huskies have a week and a half off before returning to the road for an Oct. 8 game against USC in Los Angeles. The game will kick off at 6 p.m. on ESPN and will mark the first time the Huskies have faced former head coach Steve Sarkisian, head man at UW from 2009-13.