Thiel: Big time a bit much for Huskies’ youngsters

Down 27-7, the Huskies had some comeback in them, but five turnovers and a passel of missed tackles were way too much to give 4-0 Cal and their star QB, Jared Goff. 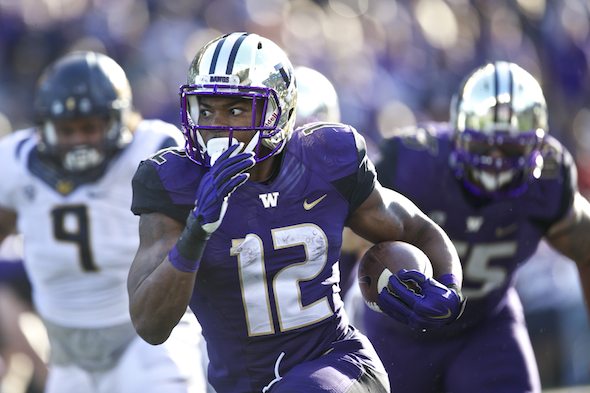 Dwayne Washington rushed for each of the 71 yards in a second-quarter Huskies touchdown drive. / Drew Sellers. Sportspress Northwest

Messy as it was, it was predictable. When a team of babes is force-fed Pac-12 Conference football, pabulum goes everywhere.

Jared Goff is one of the nation’s top quarterbacks, Cal is an improved team (4-0 for the first time since 2007) and the Pac-12 is gnarlier than the Cal State-Disneyland teams the Huskies beat earlier. But the Bears were hardly unbeatable, as a second half of just 10 points will attest.

But three lost fumbles and two interceptions are splendid ways to gift over a game that might have been ignition for Washington’s season. Instead, the 30-24 defeat gashed a beautiful fall Saturday at Husky Stadium and dashed the coaching staff’s hopes that their babes were quick studies.

“A group effort,” said UW offensive coordinator Jonathan Smith. “Everyone taking a turn making a good play, then taking their turn at screwing up something.”

With a freshman at quarterback, three in the offensive line and a couple more first-year players at running back and receiver, a high screw-up ratio was inevitable. It helped create a 40-20 disparity in time of possession, so that a good defensive effort was invisible under 481 yards of total offense.

Well, “good” is a tad generous, because a good defense would never allow so many tackles to be broken. A first-half run by Cal RB Vic Enwere (96 yards on 23 carries) and a second-half scramble by Goff were remarkable in that every Husky on defense and half the band must have had a hand on both runners but failed to stop them early in the carry.

“I was shocked when a couple of guys took shots without wrapping up,” coach Chris Petersen said. “(Including) a couple of good, experienced guys. That was really disappointing. You see what happens when you don’t wrap up, especially with running backs like that.”

The result was perhaps the most startling stat of the game — Cal’s 198 gross yards rushing again. The net yards were 139, thanks to five sacks of Goff and other tackles for loss. Coming into the game, everyone figured Goff for a 300-yard game, and he didn’t disappoint (342, on 24-for-40 with two TDs and a pick). But getting out-hit at the line was a novelty.

“It’s our youth and aggressiveness,” said nose tackle Elijah Qualls. “In all honesty, I wouldn’t trade it for anything. I love how aggressive we are.

“It’s just remembering to wrap up the ball carrier.”

But the defense had its moments, including a goal-line stand in the second quarter that denied a fourth-and-one run, followed by the surrender of only a field goal after a short-field possession gifted by a UW turnover.

Washington come back from a 27-7 deficit to 27-21 late in the third period. But UW’s next possession ended with a fumble by RB Dwayne Washington. The next one ended with three consecutive incompletions by Browning, then a field goal.

And the final shot, with 2:51 left trailing 30-21, concluded with an interception under heavy pressure.

“We couldn’t move the ball,” Petersen said. “We didn’t convert third and fourth downs (combined two for 10), and that has to change.”

Browning didn’t complete his first pass until 5:39 was left in the first half, which may have been a record slow start in the spread-offense era. He picked it up thereafter, but against his first Pac-12 defense he seemed to regress from the past two games against lesser opposition.

“I’m sure there were times he could have stepped up (in the pocket)and probably times he couldn’t have,” Petersen said. “He was getting flushed a lot more than we anticipated.

“I think we can be better than that.”

A reasonable expectation, given the abundant youth. But after a bye, the next game is a Thursday night affair at the Los Angeles Coliseum and coach Steve Sarkisian, the coach who hired all the older players and then abandoned them.

It certainly offers a splendid emotional moment. All the Huskies need to do is get football mature in 11 days.