After a 6-0 lead at halftime, the Seahawks’ offense awakened in the second half and cruised to a 26-0 victory over the Chicago Bears Sunday. 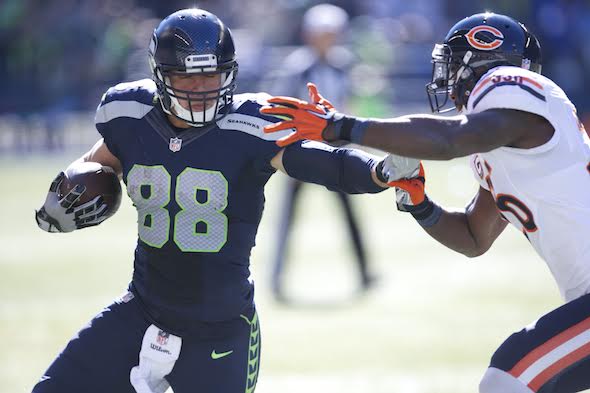 Russell Wilson and Jimmy Graham finally got on the same page, Tyler Lockett returned the second-half kickoff 105 yards for a touchdown, and the Seahawks, 15-point favorites, busted out in the second half after a poor first two quarters and romped to a 26-0 win over the Chicago Bears Sunday at CenturyLink Field (box). The Seahawks (1-2) snapped a two-game losing streak and handed the injury-depleted Bears their first shutout since Dec. 29, 2002.

The Seahawks led 6-0 lead entering the second half on two Steven Hauschka field goals (31 and 21 yards). Lockett, who scored on a 57-yard punt return in the season opener at St. Louis, took the kickoff 105 yards for a TD, longest in Seahawks history, four yards more than Leon Washington’s 101-yard return against San Diego Sept. 26, 2010.

Wilson went 20-for-30 for 235 yards and a 30-yard touchdown to Graham, who was targeted eight times (only two last week in Green Bay) and caught seven passes for 83 yards. Wilson, sacked four times, averaged 7.8 yards per attempt, didn’t throw an interception, and finished with a 101.4 passer rating, the 25th 100-plus rating of his career.

Wilson has quarterbacked 37 regular-season victories since 2012 and has thrown 76 touchdown passes. He’s 23-2 at CenturyLink Field.

The Seahawks did not convert a third down in the first half, but cashed five times in the second half.

Thomas Rawls, an undrafted free agent out of Central Michigan, became the first Seattle back other than Marshawn Lynch to rush for 100-plus yards since Robert Turbin had 108 in a 58-0 shellacking of Arizona Dec. 9, 2012. Rawls had 104 yards on 16 carries with Lynch largely sidelined due to injury.

The Seahawks, who did next-to-nothing offensively in the first half, finished with 371 yards to 146 for Chicago. The Seahawks have rushed for more than 100 yards in 14 consecutive games, a franchise record.

The Seahawks held the Bears to 146 total yards, 98 rushing and only 48 passing.

Chicago’s Matt Forte bulldozed the Seahawks for 55 rushing yards in the first half, but Seattle held the Bears to 37 total yards and one first down in the second half.

Midway through the second quarter, the Bears had a 73-18 yards edge in rushing, but the Seahawks ultimately won that stat, 159 yards to 98.

Cornerback Richard Sherman returned a punt — a piece of trickery stolen from Jeff Fisher of the Rams — 64 yards to the Chicago 19 in the second quarter. Seattle  couldn’t convert that into a touchdown, settling for a Hauschka field goal and a 3-0 lead.

Kam Chancellor, who started after holding out all of training camp and the first two regular-season games, was credited with one tackle. K.J. Wright led Seattle with 10 tackles, five solo.

“We preach special teams, but we need to make the best of the opportunities. Everybody made tremendous blocks out there. We had a lot of great matchups and it was about who wanted it more.” — Lockett.

“That was a fantastic day for this kid. We knew he could do that and it was great to see him come through” — Coach Pete Carroll on Rawls’ 104 rushing yards.

Lynch, who didn’t enter the game until late in the first quarter due to a calf injury, left at halftime with a hamstring issue (prognosis uncertain). He ran five times for 14 yards (13 on consecutive carries) and caught one pass for nine before departing . . . DT Brandon Mebane had a groin injury in the first half and did not return . . . The shutout was Seattle’s first since a 23-0 victory over the New York Giants Dec. 15, 2013 . . . The Seahawks have won seven consecutive home openers and are 11-4 all-time vs. the Bears.