Thiel: Seahawks rely on trick and some treats

Slowed by sluggish offense, the Seahawks leaned on defense and special teams against the disheveled Bears, who have a shot to be the NFL’s worst team. 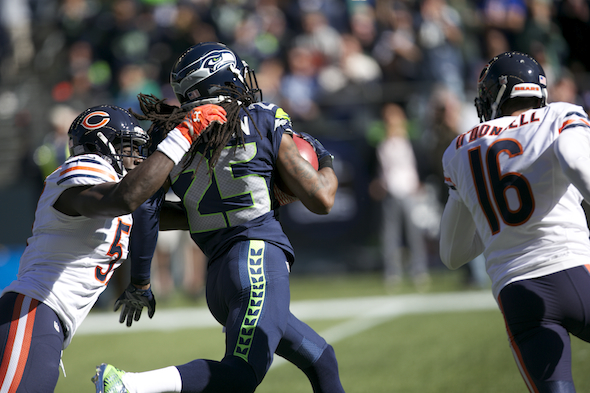 Richard Sherman returned a punt 64 yards in the first quarter by replicating deceit that was pulled on them in St. Louis last year. / Drew Sellers, Sportspress Northwest

The Seahawks established Sunday afternoon in the home opener that they weren’t as bad as the 0-2 record indicated. But in losing 26-0 to Seattle, the Bears established they are every bit as bad as 0-3 says they are. So go light on large conclusions from the result.

If you’re a Seahawks fan, feel free to go at least a little wacky over three newcomers on offense in their Clink debuts: WR Tyler Lockett, TE Jimmy Graham and . . . rookie RB Thomas Rawls, whose surprising 104 yards in 16 carries earned him status as Apprentice Beast, while the senior Beast, Marshawn Lynch, heals from a sore hamstring of undetermined severity.

Hold it down, he did — for the entire offense. On a day when pass protection regressed (Russell Wilson was sacked four times and flushed regularly) and the Seahawks didn’t convert a third down until well into the third quarter, Rawls bashed through the Bears  with a recklessness that Lynch had to admire — as well as a carefulness that former Seahawks RB Christine Michael, one-time heir to the Beast empire, failed to do.

Rawls and the Seahawks made no turnovers, which loomed larger than it usually does because the Seahawks were not out of upset range until Graham hauled in a 30-yard touchdown pass with 4:38 left in the third quarter for a 20-0 lead.

“The first half really got screwed up because of the third-and-shorts we didn’t convert,” said coach Pete Carroll. “Normally we’re really good here, and we didn’t get them.”

That’s because the offensive line, with its three members new to the position, still isn’t ready for top-shelf production. Add in mistakes by holdover vets Russell Okung and J.R. Sweezy, and the offense managed a single touchdown, doing little to suggest that it was ready for a serious defense.

It was left to the Seahawks own defense and special teams to avert an 0-3 debacle. A bouquet should get tossed in the direction of special teams coach Brian Schneider, who paid homage to an old show business axiom: If it’s good, steal it.

Burned last season by a trick punt return in St. Louis, the Seahawks replicated the deceit in the first quarter. Lockett drifted toward the Bears sideline and pretended to get under the punt to draw coverage. Meanwhile, CB Richard Sherman raced from the line of scrimmage to the Seattle 17-yard line, where, all alone, he caught the punt and took off the the other way.

The Bears’ coverage team caught him 64 yards later, at the Chicago 19.

“They said it was 64 yards, but really, it was 120,” said a smiling Sherman of his down-and-back sprint. “I was gassed at the start of the return.”

The play nearly failed because the afternoon sun was in Sherman’s eyes.

“It was a huge factor because it was right there in front of me,” he said. “I lost (the ball) for a second, but I ended up finding it again, thankfully.”

Lockett was especially pleased with his role.

“I always wanted to be an actor, so I got my first gig,” he said, beaming. Asked if he knew the play’s Seattle history, he nodded: “We stole it from (the Rams).”

Despite great field position, the offense couldn’t get a first down, much less a touchdown, settling for a field goal and a 3-0 lead.

The lead was only 6-0 to start the third quarter when special teams exploded again. Lockett went 105 yards for the longest kickoff return in club history.

“Just a beautifully blocked play,” said Carroll. “He didn’t even get touched.”

Two possessions later, Graham delivered the offense’s lone TD and defused the mini-tempest about his minimal presence in the loss to Green Bay. He had a game-high seven catches on eight targets for 83 yards.

“We seem to be getting something going,” Grahan said, then offered a salute to his new home field after some miserable visits with his old team, the Saints: “Really hearing the 12s, it’s incredible. It’s a lot louder than I remember.”

The rest of the afternoon was mostly left to the defense to complete the shutout. The feat was enough to get new defensive coordinator Kris Richard a Gatorade bath along the sidelines, but the truth was the Bears offense was so disheveled and decrepit that the Seahawks defense rates only a golf clap.

QB Jimmy Clausen, subbing for injured starter Jay Cutler, was predictably awful. He was 9 of 17 for 63 yards and never went deep once. After the Seahawks blasted RB Matt Forte early in the second half, he was mostly done. The Bears never reached field goal range, crossing midfield once.

The defense did it without a big contribution from SS Kam Chancellor, who statistically helped on one tackle, and was out of the game in the fourth quarter.

But he did receive a rousing ovation upon his introduction, suggesting at least those in-house were forgiving of his 54-day holdout.

“I loved that the fans responded as they did,” Carroll said. “He played good, tough football all day long.”

Given the state of the Bears, good, tough football wasn’t required. They were vanquished by Apprentice Beast, so hold the roar for a more appropriate foe.

Carroll said the reason Lynch wasn’t in warmups or on the field to begin the game was he couldn’t get his back loosened up. “He was going through the process of getting comfortable and he couldn’t quite make it at the start. This has happened a number of times in the past,” he said. Lynch carried five times for 14 yards and caught one pass. He didn’t play in the second half because of the hamstring, which Carroll described as “nothing to be alarmed by” . . . DE Michael Bennett on getting the best of his younger brother, Martellus, the Bears tight end who led Chicago with four catches and 15 yards: “Big brother always wins — just like the government.” . . . DT Brandon Mebane left the game in the second quarter with a strained groin muscle.