Despite having the stronger lineup and going up a goal in the first half, the Seattle Sounders finished the match lucky not to have lost on the road against Sporting Kansas City. 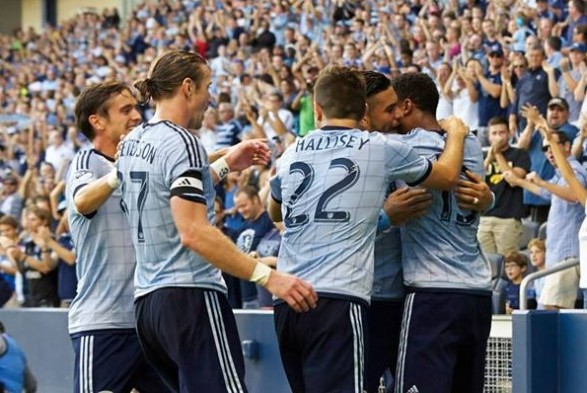 The Sounders had everything they needed; a healthy, rested lineup, an opponent weakened by suspensions and burdened by looming matches, and tons of momentum. For all of those advantages, the Sounders let off the gas too early, giving up a late equalizer and barely avoiding catastrophe in the final minutes of a 1-1 road draw Sunday afternoon against Sporting Kansas City.

“We felt that we could get three points out of here,” said Sounders head coach Sigi Schmid after the match. “We were close to it, but it wasn’t meant to be.”

Sporting Kansas City (12-9-9) opted to rest many regular starters, with the U.S. Open Cup final ahead of them midweek. Absent Matt Besler and Benny Feilhaber due to yellow-card accumulation, the team started a group that has just a handful of MLS starts under its belt, most notably giving the nod to homegrown keeper Jon Kempin for just the third time in his career.

Seattle (14-13-4), meanwhile, brought the heat. Three designated players worth a combined $8.8 million in annual salaries started up top in the form of Clint Dempsey, Obafemi Martins and recent addition Nelson Valdez on the wing. Andreas Ivanschitz played opposite Valdez, with the midfield combination of Gonzalo Pineda and Osvaldo Alonso in the center.

“We’re all a bit disappointed,” said keeper Stefan Frei. “We put in a really good first half, and had our chances in the second half to put them away.”

Seattle started as the stronger team, taking the majority of the first half to Kansas City at every opportunity, but missed chances would prove to be the team’s undoing.

Martins failed to make things difficult for Kempin with a one-on-one breakaway in the 25th minute, playing an easy shot on the ground straight to the keeper.

Martins did manage to convert after a long through ball dropped in from Pineda, catching the Nigerian striker in stride. He forced Kempin to charge out of his net, and the keeper’s deflection was unable to prevent the shot from bouncing in.

After that, energy dissipated. The Sounders failed to make the most of their possessions for the remainder of the half, nearly giving up a goal in the first half’s final seconds. Dempsey had one tap-in blocked on a great lateral dive from Kempin in the 52nd minute, while he fanned a game-winner wide on a similar cross in the 85th.

Pineda agreed that the team let up on intensity in the second half, saying that Kansas City midfielder Soni Mustivar’s appearance at halftime to replace Paulo Nagamura created problems for his side.

“They overwhelmed us a little bit in the middle,” said Pineda. “I think we never could resolve that issue, and they got some good chances out wide.”

The midfield woes grew worse with the removal of Alonso in the second half. Already under a caution, Alonso swung both feet in for an ill-advised tackle with twenty minutes to play. Though Alonso was not reprimanded for the play, Schmid did not want to risk losing his prize defensive midfielder ahead of a clash with the LA Galaxy, changing Alonso for Erik Friberg moments later. While Friberg held his zone well, the disruption in chemistry further disconnected a team that was running on fumes.

With sixteen minutes to go, the crowd at Sporting Park was holding out for a hero. They found one in Dom Dwyer. Entering as a sub in the 74th minute, Dwyer had to wait just six minutes before his chance presented itself. Racing into the box, Dwyer passed between three defenders unmarked to smash home a cross from Amadou Dia.

“(Dwyer) gives them a morale boost,” said Frei. “He fights, he works hard, and he doesn’t give up. You see that in the goal, but I think if we take care of the game beforehand, they might not even sub him out.”

Seattle can at least be grateful for Oniel Fisher, who made the most vital stop of the game. The young defender’s 93rd minute off-the-line clearance kept the Sounders from coming home empty-handed.

Schmid claimed that the point on the road was still a positive.

“For us to go on the road and get a point is still a good thing,” he said.

That is often the case in the middle portion of the season, as the playoff picture is forming. It was the case during the summer, when the Sounders were happy to escape road contests without further injuries or suspensions. With three matches remaining, however, the Sounders’ failure to execute did not bear the air of a team cranking things up for the postseason.

For the Sounders, Saturday will mark a bit more than a normal match. Two prominent members of the organization will be inducted in to the National Soccer Hall of Fame in a ceremony at the Museum of History and Industry in Seattle.

Club and national team veteran Kasey Keller enters as a first-ballot inductee. The former keeper enjoyed success in the Bundesliga, La Liga, and Premier League before serving as Seattle’s keeper for its first three seasons. Keller also stood between the posts for the USMNT through four World Cups and secured three CONCACAF Gold Cup crowns with the team.

Schmid will also be inducted on the Builder Ballot, a designation reserved for candidates over 50 who have had a major non-playing impact in American soccer. Schmid began coaching at UCLA in 1980, leading the Bruins to three NCAA national titles while amassing a 322-63-33 record in 19 seasons at the helm of the program. Schmid went on to become the winningest coach in MLS history, Schmid also has led the Sounders to four U.S. Open Cup titles.

The last inductee to be honored will be the late Glenn Myernick, was an assistant coach for the U.S. at the 2002 and 2006 World Cups, as well as coaching team USA to a Gold Cup title in 2005 after then-coach Bruce Arena was suspended for the final match.