Jerry Dipoto, 47, who lost a front-office battle with Angels manager Mike Sciosia this summer and resigned, is the new general manager of the Mariners. 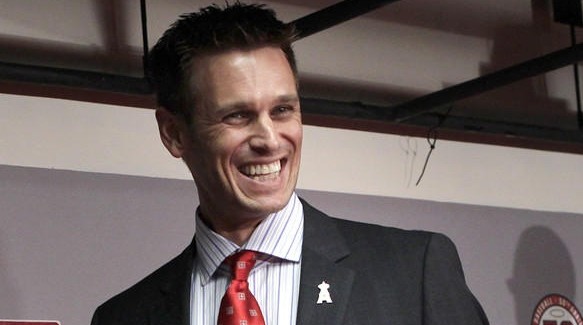 Jerry Dipoto reportedly has been offered the GM job with the Mariners. / Angels.com

Former Angels general manager Jerry Dipoto, who resigned midseason after a falling-out with manager Mike Scioscia, is the successor to Jack Zduriencik as Mariners’ general manager. Dipoto, 47, will be introduced to Seattle media at 10 a.m.  Tuesday.

“Jerry impressed us at each step of the process,” Mariners president Kevin Mather said in a press release. “He has a very unique skill set, having been a successful player in the majors, then moving into front offices with steadily increasing responsibilities. Jerry has scouted, spent time in player development and has a track record as a very successful general manager.

“During our conversations over the past few weeks, it became clear to me that he has a very solid understanding of our team and organization, both where we are and where we want to be. And he has a strategy to get us there. Few candidates bring the combination of playing the game, scouting, a solid understanding of statistical metrics and a plan for player development.

I am looking forward to having Jerry lead our baseball operations for a long time.”

A major-league relief pitcher with three teams from 1993 to 2000 who appeared in 390 games, Dipoto retired after an injury before the 2001 season. He worked in the personnel departments of the Rockies, Red Sox and Diamondbacks, and in the latter was interim general manager in 2010. He was hired as GM of the Angels in October 2011.

A New Jersey native who pitched for Virginia Commonwealth University, Dipoto is a student of advanced analytics. His desire to make personnel decisions more data-driven led to a clash over the past couple of seasons with Scioscia, the longest-tenured manager in MLB with 16 seasons. When Angels owner Arte Moreno sided with Scioscia, who has a .548 winning percentage as a manager, Dipoto resigned.