As a former player and baseball executive, Jerry Dipoto has worn every hat there is to wear. As new Mariners GM, he will take on one of two franchises never to have reached a World Series. 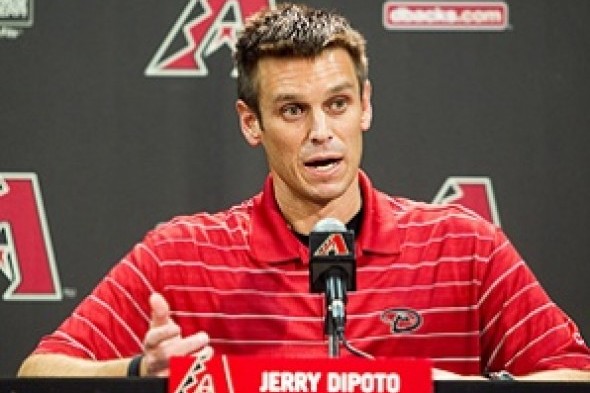 Four years ago, shortly after the Los Angeles Angels named Jerry Dipoto, then 43, as their new general manager, the Los Angeles Times sought out Arizona GM Kevin Towers for elaboration on remarks he made to the Arizona Republic about Dipoto, who had spent six seasons with the D-Backs as their senior vice president of scouting and player development.

“He’s worn almost every hat that you need to wear,” Towers said. “He’s been a closer, a big-league player, a scout, a special assistant, worked in development when he was with Colorado. He was an interim GM.

“He has tremendous recall. He knows players. He’s very organized, thorough, has people skills and work ethic. Really, there are no negatives. Do I think he’ll be a good GM? I think he’ll be outstanding.”

Angels owner Arte Moreno agreed, and was especially drawn to Dipoto’s grasp of analytics as a player evaluation tool.

“One of the reasons we hired Jerry is that I really like the way he viewed baseball analytics,” Moreno told the Times.

That particular asset had to intrigue the Mariners, who named Dipoto as Jack Zduriencik’s replacement Monday.

Zduriencik exhibited scant understanding of, or interest in, analytics, a fact reflected in the string of mediocre rosters he assembled during his tenure. A dismissal of useful data is why, to cite one egregious example, Logan Morrison infamously found himself as Seattle’s leadoff hitter for a spell earlier this season.

Ironically, Dipoto’s bent toward numbers as an information tool, if anecdotal evidence is to be believed, is largely why he is no longer general manager of the Angels and instead making plans to join the Mariners.

Depito and Angels manager Mike Scioscia disagreed on the use of analytics in decisions. The Times described it this way: “Jerry’s numbers-based approach sometimes clashed with the set-in-his-ways Scioscia. “

The rift between Dipoto and Scioscia first developed in May 2012 when Dipoto, who already revamped the Angels front office, fired long-time hitting coach Mickey Hatcher, one of Scioscia’s best friends. As time went on, and as Dipoto placed a heavier emphasis on statistical, Scioscia, a graduate of the three-run homer school, chafed.

The relationship soured to the point that Dipoto couldn’t overcome Moreno’s fierce loyalty to Scioscia, who won a World Series for Moreno in 2002. Dipoto resigned July 15. Since then, he served as a special consultant for the Boston Red Sox.

Now the ninth full-time general manager in Mariners’ history, Dipoto is a native of Toms River, N.J. He pitched for Virginia Commonwealth University, leading the school to the NCAA tournament in 1988. A year later, the Cleveland Indians selected Dipoto in the third round of the June draft. Four years later, Dipoto made his major league debut.

The Rockies immediately brought Dipoto aboard as a special assistant, a position he held until 2002, when he went to work for the Red Sox in their scouting department. Dipoto returned to the Rockies as director of player personnel in 2005, then moved to Arizona as vice president of player personnel from 2006-10. He served as the D-backs’ interim GM briefly in 2010 before joining the Angels.

The Angels won the AL West in 2014 and contended for titles every year he was with the club. Notable deals during his Anaheim tenure included trades for All-Stars Huston Street, Zack Greinke, David Freese and Hector Santiago, and the free-agent signings of Albert Pujols (2011) and C.J. Wilson (2011).

Dipoto didn’t draft reigning MVP Mike Trout in 2009, but neither did Zduriencik, whose “metrics” or whatever system he was using, told him to take Dustin Ackley instead.

Now Dipoto inherits a Seattle franchise that has gone 14 years without a playoff berth, the longest active streak in the majors. Former GM Bill Bavasi largely created the mess, Zduriencik added to it and was unable to fix it.

In addition to addressing another lame Mariners roster, Dipoto will have to spend considerable time on the minor league system, left virtually bankrupt by Zduriencik. Seattle’s major affiliates — Class AAA Tacoma (68-76), AA Jackson (53-84), A Bakersfield (61-79) and A Clinton (46-93) — all finished with losing records this year.

“During our conversations over the past few weeks, it became clear to me that he (Dipoto) has a very solid understanding of our team and organization, both where we are and where we want to be,” said Mariners president Kevin Mather in a release. “And he has a strategy to get us there. Few candidates bring the combination of playing the game, scouting, a solid understanding of statistical metrics and a plan for player development.”

The Mariners botched the 2015 season when they were supposed to be a World Series contender. It’s now up to Dipoto to make sure they don’t botch another offseason.