Rookie Thomas Rawls is first Seahawks undrafted free agent to rush for 100 yards in a game. Fellow rook Tyler Lockett is first to score TDs from kickoff and punt returns in same season. 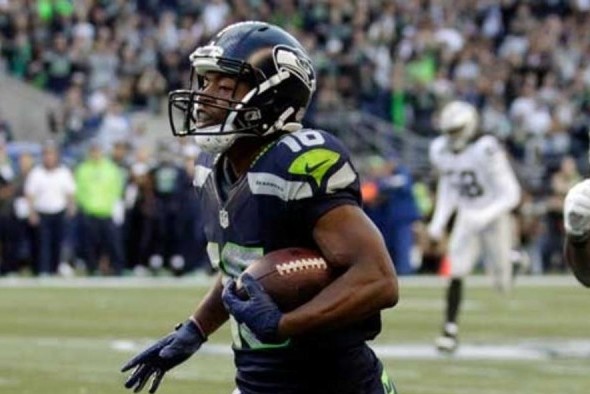 NFL.com delivered a mixed review in its pre-draft scouting report on RB Thomas Rawls of the Central Michigan Chippewas. The upside first: “Rawls is powerful beyond his size with strong legs and outstanding balance . . . . Able to absorb contact on legs with defenders bouncing off . . . Coils into a ball of power and explodes into tacklers with cocked hip . . . Finishes his runs with a message being sent.”

Rawls sent quite a message Sunday. With Marshawn Lynch unable to continue with a hamstring problem, Rawls rushed for 104 yards, becoming Seattle’s first 100-yard rusher other than Lynch since Robert Turbin produced a 108-yard game against Arizona Dec. 9, 2012.

NFL.com projected that the 5-foot-9, 215-pound Rawls would go off the draft board either in the fifth or sixth round – that despite this “bottom line” assessment: “While he finishes with brute force, he possesses the vision and lateral movement of a finesse runner. He is more than capable of handling a starter’s workload in the NFL.”

But no team drafted Rawls, and NFL.com’s scouting report provided a pretty good reason why: “Suspended two games after being charged with three felonies. Missed time at end of season with knee injury. Did not play in bowl game due to academic issues.”

That’ll do it every time.

The scouting report elaborated that Rawls had been charged with felonies of larceny and credit card fraud in April 2014 after allegedly stealing a 62-year-old woman’s purse, before he enrolled at CMU. Prosecutors and Rawls reached a plea deal, but the baggage Rawls carried was such that every NFL team went for coffee.

Seizing the moment, the Seahawks made Rawls one of 10 undrafted free agents they signed May 8. Now he holds a unique place in Seahawks’ history as the only undrafted rookie free agent ever to rush for 100 yards in a game, and one of only four such players to do so in the month of September since the 1970 NFL-AFL merger (last was Brandon Bolden of New England in 2012).

It’s a rare thing for the Seahawks when a rookie, much less an undrafted one, produces a 100-yard rushing game. Shaun Alexander, a first-round pick (2000), had a shot Oct. 2, 2000 when, replacing Ricky Watters, he got 11 carries against Minnesota. But Alexander finished with 74 yards.

Curt Warner had six 100-yard games as a 1983 rookie, including a high of 207 against Kansas City, not unexpected since the Seahawks traded up in the draft in order to select Warner No. 3 overall. But no other Seattle rookie has had more than one, Ahman Green in 1999 the last before Turbin. This is the extent of Seattle rookies producing 100-yard rushing games:

In addition to Rawls being the only undrafted player on the list, he holds the distinction of having collected his first 100-yard game in his first career start. Of those listed, only Ahman Green (Sept. 6, 1998 at Philadelphia) also did that.

While Rawls became the only undrafted rookie to rush for 100-plus yards for the Seahawks, Tyler Lockett, who cost the Seahawks four draft picks (who cares now?), is the only Seattle rookie – in fact, the only player — to score on punt and kickoff returns in the same season.

Lockett returned Sunday’s second-half kickoff a record 105 yards as an encore to his 57-yard punt return against St. Louis in the season opener.

Charlie Rogers, Seattle’s fifth-round pick in 1999, was the first Seattle player to complete the kickoff return-punt return TD feat. Nate Burleson followed. But Lockett is the first to pull off the double in his rookie season — and in three games no less.

Russell Wilson opened the season with two mediocre — for him — performances. He threw a touchdown and an interception at St. Louis and came back with two TDs and a pick at Green Bay. His passer rating in those games: 90.1 and 91.8, respectively, below his career mark of 98.6 entering the season.

Due to no interceptions and a 30-yard touchdown pass to Jimmy Graham in the third quarter Sunday, Wilson topped 100.0 for the first time this season, finishing at 101.4.

That marked the 25th game of Wilson’s career in which he’s exceeded a 100.0 passer rating, elevating Wilson into a tie with Dan Marino, Ben Roethlisberger and Joe Flacco for most such games in the first four seasons of a career. Wilson now has 13 games to break — and add to — that record.

The following quarterbacks all posted at least 24 passer ratings of 100-plus during their first four seasons in the NFL: