Held to four hits, the Mariners didn’t put up a big fight Monday against the Houston Astros, but did get a good start from Roenis Elias, who allowed three hits in six innings. 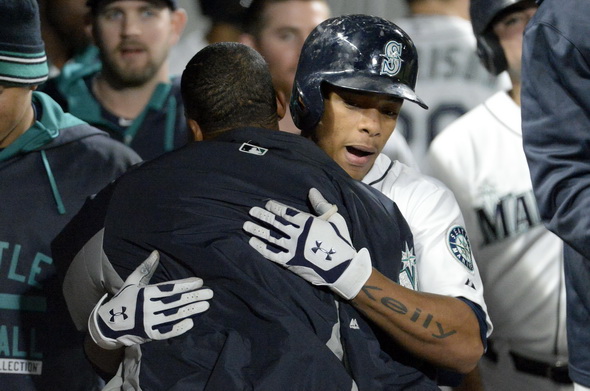 Solo homers by RF George Springer and DH Evan Gattis, both in the first inning, and 1B Chris Carter in the seventh gave the Astros all they needed to beat the Mariners 3-2 Monday night (box score) at Safeco to start the final homestand of the season. The Mariners (74-83) have lost six in a row, to more than balance their five-game win streak to start the month. The Astros (83-74) hung on to their one-game lead over the Angels for the second American League wild card berth.

After Ketel Marte tied the game at 2 with his own solo homer in the sixth, this from the left side after hitting one from the right side last week, Carter took reliever Danny Farquhar into the second deck in left field 410 feet away for his 23rd homer, and fourth off the Mariners.

Mark Trumbo singled in the only other run in the firat. The Mariners had four hits, and the 2-3-4 hitters struck out in the ninth. Nelson Cruz struck out all four at-bats.

Roenis Elias gave up four hits in his six innings (10o pitches) and had five strikeouts, but it wasn’t enough. Farquhar left a curve ball up to Carter, who hit the eighth homer off Farquhar in his 40 appearances.

“(Elias) is settling down a lot more, a lot more mature. He’s slowing things down, even when it’s tough. He’s relaxing  and has a good tempo.” — Mariners manager Lloyd McClendon

McClendon met Monday with new general manager Jerry Dipoto and called the meeting “great” but didn’t provide details. “He’s a very energetic, intelligent, dynamic, forward-thinking guy,” McClendon told reporters before the game. “I thought we hit it off pretty good. We had a very honest discussion about a lot of things. It went very well.” Asked about his job security — McClendon was hired in 2013 by the since-fired Jack Zduriencik — he said, “Well, I’m under contract to manage next year and hopefully I’ll manage that club. Beyond that, if you’re looking for security in this game, you’re in the wrong business. That’s me and every other manager.” . . . McClendon said LHP Vidal Nuno will start Tuesday but said it’s “highly unlikely” that LHP James Paxton (3-4, 3.90 ERA) pitches on Wednesday after tearing a fingernail in his most recent outing.