After spraining his neck in a practice fall Wednesday, Sounders defender Chad Marshall has returned home from a stay in the hospital. He is likely to miss Sunday’s game against the Galaxy. 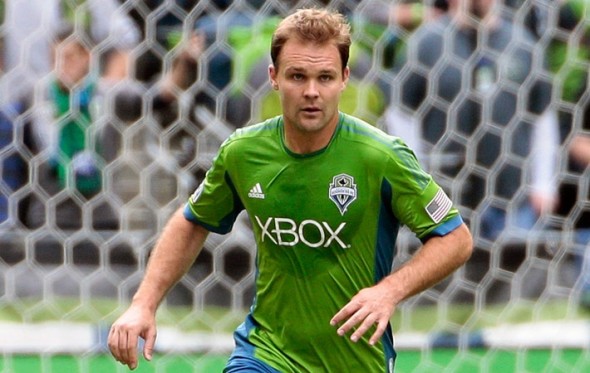 Chad Marshall left practice Wednesday in an ambulance after falling on his head during a drill. / Soundersfc.com

It’s been a bad season for the Sounders medical staff, with players dropping left and right to hamstring pulls, groin injuries, and center back Român Torres’ season-ending ACL tear. The situation worsened at practice Wednesday, when reigning MLS defender of the year and 2015 All-Star Chad Marshall left practice via ambulance after falling and landing on his head and neck.

According to the Seattle Times, Marshall was able to move his arms and legs as he was tended to by medical staff, who stabilized the 31-year-old’s head with a brace as he was carted away.

Since that moment, the news has brightened. Sounders head coach Sigi Schmid did not speculate regarding the precise nature of the injury,  saying caution was the order of the day.

“We’re taking all the precautions,” said Schmid Wednesday. “You’re always going to err on the side of being conservative when something like that when it’s a head or a neck, and that’s what we’ve done. We’ll know more later.”

Marshall  took to twitter later Wednesday evening to let fans know that he was alright, saying that the “scans went well.”

Thank you everyone for the messages and well wishes. Really means a lot. Scans went well and I’m doing alright.

Whether the scans in question were MRI or X-ray, and if those scans turned up negative for any sort of long-term damage, remain to be disclosed.

Marshall has had head injuries. The defender played just twelve matches in 2007 due to lingering concussion symptoms. While Marshall claims to be OK, he will remain a question mark on the team sheet until the lineups are announced for the home match at 6:30 p.m. Sunday against the Los Angeles Galaxy.

At 4:30 p.m. Thursday, the club issued a statement on Marshall’s condition:

Seattle Sounders FC defender Chad Marshall has undergone a full battery of medical tests and protocols. The club can confirm at this time that he sustained a neck sprain, and all precautions are being taken to ensure the player’s health and recovery. Marshall has subsequently been discharged from Virginia Mason Medical Center and is recovering at home with his family. A timeline for Marshall’s return has not been determined, and no other information is available at this time.

Without a timeline for recovery, Marshall is unlikely to play Sunday, though the phrasing of the release seems to suggest he may play again this season. Either way, it’s bad news for a Sounders team preparing to face one of the most potent offenses in the league.

While Marshall’s was the most notable exit, two other Sounders took early showers. The oft-bruised Nelson Valdez left after he took a knock to the leg, while left back Oniel Fisher hobbled off later. Fisher is listed as having a hamstring injury by the MLS injury report, but Schmid dismissed both injuries as non-serious in the long run.