The Seahawks take a 21-8 record, the highest winning percentage in the history of the event, into their Monday Night game against the Detroit Lions at the Clink. 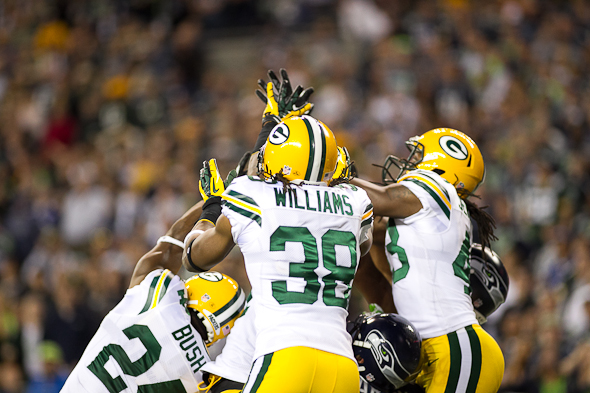 The Seahawks have not appeared on Monday Night Football as often as many teams, but they are the most successful NFL club when they do, with a winning percentage of .724 (21-8), including 5-0 under head coach Pete Carroll. The Seahawks take a 15-5 overall home mark and nine-game MNF winning streak into their next appearance, against the Detroit Lions at 5:30 p.m. Monday night at The Clink (ESPN).

Two of the more improbable victories in franchise history occurred on MNF. Three years ago, with regular officials on strike, the Seahawks eked out a 14-12 win over Green Bay when Russell Wilson threw the infamous “Fail Mary” touchdown to Golden Tate with no time left on the clock. And 36 years ago, an early edition of the Seahawks, using a variety of trick plays, stunned the Atlanta Falcons in the club’s first appearance on MNF.

Many of Seattle’s 29 MNF games have faded into the deep archives, nothing to keep them keeping them memorable. Not so the following 10, each of which delivered a lasting moment, record or outcome. In a snub at Internet protocol, and just to be contrary, we rank them 1 through 10 instead of 10 through 1.

1. Sept. 24, 2012 (Seahawks 14, Packers 12): The disputed pass to Tate, who shoved a Packers defender out of the way and wrestled another for the ball in the corner of the end zone was ruled a simultaneous reception. Tate received “discredit” for the TD, called on the field by replacement referees and upheld after a booth review. Tate’s catch overshadowed eight sacks by the Seahawks on Aaron Rodgers, including four by Chris Clemons in the first half, which tied the NFL record. Later in the week, the NFL settled with the referees’ union and dismissed the replacements.

2. Oct. 29, 1979 (Seahawks 31, Falcons 28): The three-year-old Seahawks, making their debut on Monday Night Football, recovered from a 14-0 deficit in Fulton County Stadium with an improbable effort. The win included a variety of trick plays, including a fake field goal attempt that turned into a 20-yard completion from quarterback Jim Zorn to kicker Efren Herrera that set up the tying touchdown. Fullback Dan Doornink kept the Falcons on their heels after that, rushing for 122 yards, and cornerback Dave Brown made a game-saving interception, but it was coach Jack Patera’s unpredictable play calling that made the Seahawks a hit locally and nationally.

3. Nov. 9, 1987 (Raiders 37, Seahawks 14): Kansas City Royals slugger Bo Jackson, who also played a little running back, ran for 221 yards and three touchdowns, including a 91-yard gallop. Jackson’s most memorable play came in the third quarter, when Seattle lrookie inebacker Brian Bosworth attempted to tackle Jackson at the Seattle two-yard line. Jackson pancaked The Boz so emphatically that even Seahawks fans rose from their seats, awed by the spectacle. Bosworth himself later provided the best description of the play: “He freight-trained my ass.”

4. Nov. 28, 1988 (Seahawks 35, Raiders 27): Dave Krieg tossed a career-high five touchdown passes to five receivers and Curt Warner (130) and John L. Williams (105) became the first pair of Seahawks to each gain more than 100 yards rushing in the same game. Hampered by five turnovers and some shaky officiating, the Seahawks still controlled the ball for 38 minutes and 38 seconds.

5. Dec. 5, 2005 (Seahawks 42, Eagles 0): The Seahawks gained only 194 yards of total offense, but didn’t need much more in one of the outstanding defensive performances in franchise history. Andre Dyson scored on a 72-yard interception return and 25-yard fumble return, and LB Lofa Tatupu took another interception 38 yards for a touchdown. Shaun Alexander continued his offensive assault, scoring his 22nd rushing touchdown, matching Priest Holmes’ NFL record for most TDs in the first 12 games of a season.

6. Nov. 27, 2006 (Seahawks 34, Packers 24): Dashing through a rare Seattle snow storm, Shaun Alexander ran for a season-high 201 yards and set a franchise record with 40 carries. The kickoff temperature of 34 degrees was the coldest for a Seahawks home game, and contributed to the four turnovers by Seattle quarterback Matt Hasselbeck.

8. Dec. 2, 2013 (Seahawks 34, New Orleans 0): Wilson threw for 310 yards and touchdowns of two yards to Zach Miller, four yards to Doug Baldwin and eight to Derrick Coleman. Michael Bennett returned a fumble 22 yards for a score as the Seahawks blitzed Drew Brees and the Saints. Wilson finished with a 139.6 passer rating in a game of significance: The Seahawks clinched home field advantage throughout the playoffs, which came into play in the NFC Championship game, a 23-17 victory over the San Francisco 49ers.

9. Dec. 2, 2007 (Seahawks 28, Eagles 24): Linebacker Lofa Tatupu set up Seattle’s first two touchdowns by intercepting A.J. Feeley twice in the first quarter, and sealed a victory at Philadelphia with another pick at the Seahawks four-yard line in the final minute. “Tatupu had one of the great games I’ve ever seen a linebacker have,” Seattle coach Mike Holmgren said.

10. Oct. 6, 2014 (Seahawks 27, Washington 17): Wilson rushed for a career-high 122 yards and a touchdown and threw for two scores, but the memorable parts of the game were Seattle’s 13 penalties for 90 yards that created a frustrating hat trick for WR Percy Harvin. He had a 16-yard scoring run negated by a holding penalty on guard James Carpenter. On the next play, a 26-yard TD catch was wiped out on a penalty on Harvin himself. Early in the fourth, Harvin scored again on a 41-yard pass from Wilson, but that  was erased by another penalty on Carpenter.