if Marshawn Lynch’s injuries prevent him from playing Monday against Detroit, backup RBs Fred Jackson and Thomas Rawls say they’re up to the task. 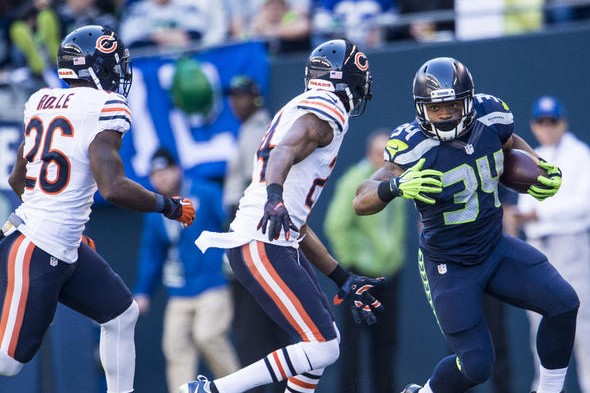 Rookie Thomas Rawls put in some hard running against Chicago, and says he’s ready to do the same if Lynch cannot play against the Lions. / Seattle Seahawks

Marshawn Lynch’s injuries (calf, hamstring, back) means that he is questionable to start Monday against the Detroit Lions, with head coach Pete Carroll saying that it may come down to a game-time decision on whether Beast Mode will see the field. In his potential absence, RBs Fred Jackson and Thomas Rawls sound ready to shoulder the load of Seattle’s ground game.

The backs, both undrafted, are at opposite ends of their careers.

Jackson, who was passed over in the 2003 draft, played indoor football and had a spell in the ill-fated NFL Europe before making the big time in 2006 with Buffalo, where he became a fan favorite, team captain and the franchise’s third-leading rusher behind Thurman Thomas and O.J. Simpson.

After his release by Buffalo last month, the Seahawks signed Jackson, at 34 the NFL’s oldest active running back, as a situational third-down back for his blocking and catching ability in the passing game.

Rawls, meanwhile, is a rookie from Central Michigan and the University of Michigan who’s doing his best to prove he belongs in the league. Sunday, he ran for 104 yards on 16 attempts after Lynch left the game against the Bears. Coach Pete Carroll liked what he saw.

“He’s very aggressive, and he was looking for hits downfield,” said Carroll. “He’s got an attitude that he wants to let you know he’s coming, and that’s what I got excited about.”

His running style is a product of two mottoes already held in high regard in the Seahawks locker room.

“It doesn’t matter where you come from, it matters what you do,” said Rawls. “It’s not about how you start, it’s how you finish.”

The statement makes Rawls fit right in in a locker room that has so many chips on shoulders you wouldn’t be surprised to find bowls of guacamole dip left by the ping pong tables. Still, confident or not, however, Lynch’s punishing attack will be a difficult hole for the backs to fill.

“You have to be ready to go in at any moment,” said Jackson. “(Injuries) happen all the time, so you have to prepare like you’re going to be playing anyway.”

Rawls said Lynch’s potential absence didn’t change how he would approach the Lions.

“I’m just preparing and trying to be as perfect as I can for this team. That’s my job,” he said. Eagerness was apparent when Rawls concluded the interview by donning his helmet and trotting out the door to the practice field.

Jackson admitted that for the tough-as-nails Lynch to be considered questionable, the injury in question isn’t trivial.

“If he’s questioning it, it must be a severe injury,” said Jackson. “He wants to be out there and contribute.”

Asked what advice Jackson had for his younger counterpart if things hit the marrow and they must take over for Lynch Sunday, Jackson said consistency was key.

“Build off of what he did last week,” said Jackson. “Approach the game just like he did. Don’t put too much pressure on himself. You’re here with us, so you have the talent to compete. Just go do that.”