Thiel: Mariners, the open wound of the AL West

Mariners’ 3-2 win over Oakland does little to ease fans’ aggravation over the bigger story — the Rangers and Astros, after terrible seasons in 2014, leaped over Seattle into the playoffs. 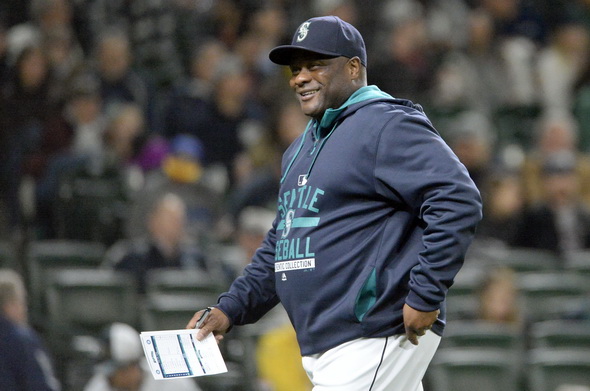 Lloyd McClendon said he was “proud” of his 76-win team this year. / Alan Chitlik, Sportspress Northwest

Varied are the ways to look at the Mariners’ habitual sports agony. But since they lost nine of their final 11 games in 2015, all to American League West foes — the 3-2 win Sunday over Oakland averted a franchise first: Getting swept at home in the final series by a 90+-loss team — let’s take a look within the division.

The Texas Rangers were the American League’s worst team in 2014 at 67-95, then lost to injury in spring their ace, Yu Darvish, plus their star young second baseman, Jurikson Profar. Yet they improved 21 games, including Sunday’s 9-2 win over the Angels, to claim the division title with an 88-74 record.

The once-woebegone Astros also made the AL  playoffs as the second wild card with 86 wins — one fewer than the Mariners in 2014, and 17 better than Houston did a year ago. And that was after three consecutive 100-loss seasons.

Through player development and trading acumen, the Rangers and Astros healed themselves in a single season. In this century, at least after 2001, the Mariners have never healed themselves. They are the open wound of the division, if not for all of MLB, given that their 14-year absence from the playoffs is the game’s longest drought.

Those three are the only division titles in the club’s 39 years (they made one other playoff appearance as a wild card in 2000). I realize a division title is a relatively modest achievement, but the Mariners have somehow turned it into Everest. How hard can it be to be better than three other teams just once in half a generation?

Since the 2001 Seattle season of 116 wins — with each passing year, it takes on the freakishness of a snowstorm in Panama — the AL West title has been won six times by Anaheim, five by Oakland and three by Texas.

What further galls the remaining fan base is that none of the division franchises have the ballpark, the ownership wealth or the regional market monopoly the Mariners have. Yet all those advantages have translated into squat.

The final 76-86 record is hardly terrible, especially in parity-ridden MLB. The aggravation comes from the fact that every team over 14 years has figured it out faster than the Mariners, who keep getting leap-frogged.

As all school children know by now, the dithering of CEO Howard Lincoln has cost the franchise dearly. Lloyd McClendon is the eighth manager (including interim appointees) since the 2002 departure of Lou Piniella, and Jerry Dipoto, the fourth general manager under Lincoln, probably is going to hire shortly the ninth successor to Piniella.

“But I’m also cognizant of the fact that Jerry has to make the decisions, not me. If he chooses to go in a different direction, as I’ve said, I’ll support him.”

Asked Sunday after the game if he thought it was absurd that after only two years (of .500 ball) his tenure was precarious, McClendon laughed.

“No,” he said. “You guys told me my job was precarious the day I stepped on campus.”

We did. We were right — despite his oft-quoted phrase from his introductory presser that a “golden age” was upon Mariners baseball.

“I still feel that,” he said, then launched into a modest soliloquy that sounded like an attempt to save his job. “This club is in a much better position now than when I got here. There are a lot of good things going on.

“There’s an emerging superstar in (RHP) Taijuan Walker. I think he’ll anchor this staff for a long time. We have a nice group of core players, championship-quality players. We need players around the edges to make us better.

“I’m proud of where this club is now, compared to where it was when I took over.”

That’s true, at least regarding the fact that the final season of his predecessor, Eric Wedge, had 71 wins. But if one were to ask 10 longtime baseball executives which teams’ futures he would choose among the Rangers, Astros and Mariners, my bet is on the Mariners to finish third on all 10 ballots.

It’s true that the Mariners aren’t terrible — they had a club-record and major league-high 23 extra-inning games, and 27 of their defeats came in the opponents’ last at-bat, also a major league high. They played almost every game close, just not necessarily well.

A game of thin margins has grown even more difficult because of dominant pitching. It’s Dipoto’s belief that every bit of information counts, no matter how esoteric it may seem. But if McClendon feels as does Angels manager Mike Scioscia — Dipoto’s manager in his previous post — that games were won and lost for many years before advanced analytics became available, then he will have to be happy joining Scioscia on a couch this fall watching the playoffs.

That means another change of managers in Seattle. As Lincoln said, it’s too much.

Then again, as this season and its 13 predecessors have proven, it’s never enough.