Barrett goes from inactive to hero for Sounders

A spark plug substitute performance from Marco Pappa and a late goal from Chad Barrett was enough to save Seattle from a loss after a glaring error in the first half. 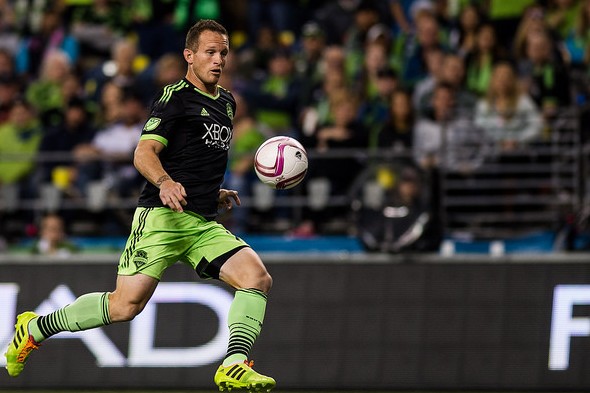 Chad Barrett came off the bench and left the stadium a hero thanks to his goal in the match’s closing moments. / Jane Gershovich, Seattle Sounders FC

As the Seattle Sounders were warming up Sunday afternoon at the Clink for a crucial match against the Los Angeles Galaxy, Chad Barrett,  not on the 18-man active roster, was up in the pressbox in a sports coat, drinking a soda. Two hours later, he was smashing in a 93rd-minute equalizer for a dramatic 1-1 draw.

Seattle (14-13-5) attacked aggressively from the start, with many players making noteworthy individual efforts in possession. As a team, though, the Sounders were sluggish and disjointed as they attempted to string passes together, with many balls rolling wide of or behind their intended recipients.

Another miscue gave LA (14-9-9) the lead. In the 36th minute, Sounders center back Zach Scott made an errant lateral pass just above his own 18, overshooting Gonzalo Pineda and serving the ball on a silver platter for Galaxy captain Robbie Keane. He stepped up and easily converted the ball past Stefan Frei as Scott curled to the ground in frustration.

“We gave up a goal on a mistake and they punished us for that mistake,” said Sounders head coach Sigi Schmid of the wayward pass. “An experienced player like (Scott) doesn’t need me to slap him across the knuckles and tell him he made a mistake. I know he’ll move forward and won’t make that mistake again.”

Brad Evans addressed the issue with his usual straightforwardness.

“It’s done. A guy that’s done so much for the club, that bleeds rave green, you don’t say (expletive),” said the captain.

With a painful lesson learned, the Sounders went into the break trailing 1-0 and out-shot 8-2 in the first half. They came out in the second half and banished the drowsiness that cost them two points against Sporting Kansas City Sept. 27. Instead, Seattle’s wings actively drifted forward in the attack, as Obafemi Martins and Clint Dempsey served up good chances for one another that neither managed to put away.

Marco Pappa replaced an ineffective Neagle in the 66th minute, and the Guatemalan’s ball control and energy revitalized a wilting midfield. Barrett entered in the 66th as well for a spent Ivanschitz. Schmid said the decision to start Neagle over Pappa as Valdez’s replacement was motivated by a mixture of Pappa’s fitness and tactics.

“We didn’t want to have (Ivanschitz and Pappa) out there where those were two subs we were going to have to make — we wanted to be able to use our subs tactically,” said Schmid. “Also, when we lost Valdez, we lost a guy who’s a good header of the ball. (With Pappa) we would have gotten a lot smaller.”

Seattle pressed on, but no goal seemed forthcoming. Twice Dempsey nearly slotted an equalizer, the first with a long range blast that forced a diving deflection from keeper Donovan Ricketts, and the second time narrowly lifting a first-touch chip just over the crossbar. Several passes also found the quick feet of Martins, but close, physical marking from LA left the Nigerian no room to work.

As all seemed lost, Seattle won a corner in the third minute of stoppage time. Up stepped Pappa, who served an in-swinger from the right alley at waist height. An Evans touch redirected the cross straight in front of a charging Barrett, who notched his fifth goal of the season and brought relief and jubilation to the 56,097 in attendance.

“We had been putting great balls into the box, and nobody had been crashing,” said Barrett. “I was like, ‘just take a chance.’ I beat my man, (Gyasi) Zardez, and all I had to do was run into it.”

He said it was a whirlwind to go from the press box to celebrating with fans in the first row: “It’s been a funny day.”

Funny, but an important result with two games left before the playoff picture finalizes.

The draw means that the Sounders have avoided being swept in their three regular-season games against the Galaxy, and slides them into fifth place in the west with 47 points. Portland and San Jose hungrily eye the Sounders from just below with 44 points apiece.

“At this point in the season, a point is a point, and we have to take it in stride,” said Evans. “Against the Galaxy, it’s a good result for us.”

Perhaps most importantly, the Sounders have proven that they can dig deep and score with their backs against the wall, an important trait come playoff time when defenses bristle and the away-goals rule reigns supreme.

“Everybody in our locker room knows that we can come back,” said Schmid. “One-nothing is nothing at the end of the day, and there isn’t a team in this league that we can’t play with.”

Seattle won’t have to play next weekend, offering a chance for some injuries to heal while Evans and Dempsey serve USMNT duty against Mexico Saturday. The Sounders will face the Houston Dynamo in their final road contest of the regular season Oct. 18.