Huskies coach Chris Petersen is still looking for a signature win in his early tenure at Washington. Could there be a better one than beating Sark in his park? 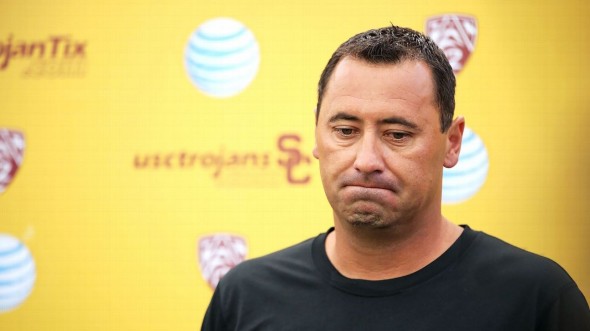 Ex-Huskies coach Steve Sarkisian explained to reporters in August how he accidentally mixed alcohol and meds before he spoke at a booster-group function at USC, where he embarrassed himself. / Dailyreadlist.com

A popular benchmark for college coaching success is the signature win, usually defined as a program on the come beating a favored, well-regarded opponent. The next two opponents, starting at 6 p.m. Thursday with USC at Los Angeles (ESPN) and Oct. 17 at Husky Stadium against Oregon, will certainly provide the signature for Washington coach Chris Petersen.

The win part is another matter.

The 3-1 Trojans are 18½-point favorites to deny Petersen his first such triumph. Judging by his respect for USC, the spread should be greater.

“They’re very underrated,” he said this week. Well, at 17th in the Associated Press poll, it seems they have been noticed more than, say, Quinnipiac University. But Petersen is happy to talk up the Trojans because if the Huskies can somehow hold USC close, he’d like a shot at outsmarting their coach, Steve Sarkisian, for the victory, which wouldn’t be all that hard to do.

When he was coach at Washington, Sarkisian would offer up a strategic gaffe on a fairly regular basis (recall the 2012 Apple Cup loss that Sarkisian himself called a “comedy of errors”), much of it owing to the fact that he had never been a head coach at any level before athletics director Scott Woodward hired him to erase the memory of Tyrone (0-12) Willingham.

The selection was a reach, but there weren’t a lot of hot-resume coaches clamoring to take over the sick program of the Pac-12 (then 10). Sarkisian worked out, pulling off a 34-29 record despite the inexperience, returning the Huskies to the bowl season four consecutive times.

When he left three days after the 2013 Apple Cup for his “dream job” at USC, where he coached under Pete Carroll,  he vacated Petersen’s dream job. It didn’t take much cajoling to get Petersen to Montlake, even though he had a sweet gig at Boise State, where he was king of a smaller realm.

So it could be said that Petersen owes Sarkisian a favor, or at least an attaboy. But this first encounter between them at their new jobs won’t necessarily be a warm affair. Fact is, they hardly know each other.

“I’ve talked to him a couple different times at some of the coaches’ functions,” Petersen said. “Not necessarily about the detail of what’s going on here or anything like that.”

Nor did he seek out Sarkisian for the keys to the UW coaches’ washroom — or the liquor cabinet.

“I didn’t talk to Coach Sark about (the Washington job),” he said. “But I talked to some other people that I knew and those types of things.”

He did inherit Sarkisian’s players, some of whom were very good (Danny Shelton, Hau’oli Kikaha, Shaq Thompson), one of whom was mysterious (Cyler Miles) and about eight of whom he tossed off the team (including NFL draftee Marcus Peters).

In two years, only 33 of the 64 players on the two-deep Huskies roster remain from those who initially barked for Sark.

Given his notorious August episode of drunkenness at a preseason booster function, Sarkisian probably did the Huskies a favor by doing his minor scandal on the watch of Pat Haden. The USC athletics director chose not to punish Sarkisian but had him enter a treatment program, details of which are elusive.

Sarkisian broke no laws or NCAA rules, but he did himself no favors among the USC boosters who were disappointed in Haden’s selection in the first place. The wound probably would heal faster with a resounding dispatch of his former employers, although Sarkisian betrayed no special eagerness.

“I respect those kids a lot,” he said. “We recruited them and got them to come to Seattle with the best interests at heart to go out and be successful. It’s going to be fun to compete against them. I know they’re going to be ready to go. I wouldn’t expect anything less of them.”

Sarkisian claimed to have no regrets from his tenure at Washington.

“No, not at all,” he said. “Did I want to win more games? Yeah, of course. Are there games that I would love to have back? Of course. But I’m proud of the work that we (did). It’s not always perfect, it’s never going to be perfect, but I am proud of the fact that the program was in a better position the day we left than the day we got there.”

True, but the bar was not high. The bar of standards, that is.

For his part, Petersen is doing his best to tamp down the beat-the-coach-who-betrayed-you storyline.

“I think it is (over-hyped). I think the big thing is playing against USC and the players they have. A lot of our players know those guys — know of them, know them personally. They were the top players in southern California. Some of these guys were top players in the country.”

In playing the Huskies’ opener at his old joint, Boise State, he experienced the role of betrayer returned.

“We kind of went through it ourselves on the other side,” he said. “When you go out there and play it’s about blocking and tackling and catching. It has nothing to do with all that other stuff. There’s stuff made out of pregame hype that doesn’t really have a whole heck of a lot to do once the game is played.”

That might be true. But there’s a reason ESPN picked this game for its national Thursday telecast, and it isn’t because they want to see freshman QB Jake Browning attempt his Russell Wilson impression.

Petersen could use a signature win for a reason more pragmatic than one-upping Sarkisian — years and years of potential Huskies recruits in southern California will be watching. Beating Sark in his park would be large.

“There will be a lot of eyes on, so you really want to go out there and put your best foot forward,” he said. “We’ll stay down there ourselves and recruit a little bit after. It’s important.”

And Huskies fans could also use a weapons-grade snicker.