The Seahawks labored much of the game, but a huge defensive play by SS Kam Chancellor late in the fourth quarter saved the day as Seattle beat Detroit, 13-10. 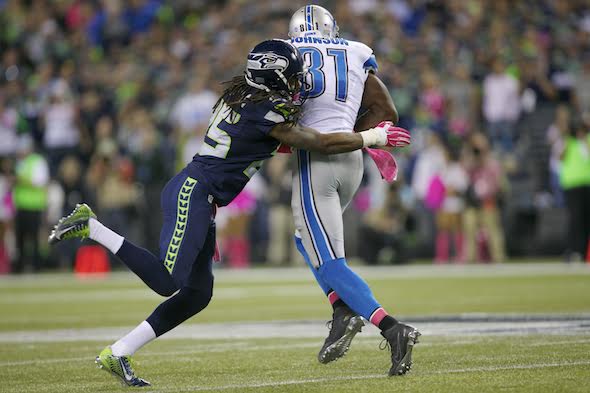 Kam Chancellor, whose 54-day holdout dominated training camp and the first two weeks of the regular season, probably saved the 2015 campaign for the Seahawks with one of the clutch defensive plays in franchise history. With 1:45 remaining and Detroit’s Calvin Johnson about to cross the goal line for the go-ahead — and probably winning — touchdown, Chancellor knocked the ball from Johnson’s grasp. With an assist from LB K.J. Wright, who batted  it out of the the end zone for a touchback, the Seahawks prevailed 13-10 Monday night at CenturyLink Field (box). Instead of falling to a near-fatal 1-3, the Seahawks at 2-2 remain in the thick of the NFC West race.

No call was made, but NFL head of officials Dean Blandino said after the game that the Lions should have gotten the fumbled ball back at the half-yard line since it was intentionally batted out of the end zone by Wright.

“The back judge was on the play and in his judgment he didn’t feel it was an overt act, so he didn’t throw the flag,” Blandino told ESPN. “In looking at the replays, it looked like a bat so the enforcement would be basically we would go back to the spot of the fumble and Detroit would keep the football.”

After Detroit pulled to within 13-10 on a 27-yard fumble return TD by Caraun Reid with eight minutes to play, the Lions mounted a length-of-the field drive, highlighted by former Seahawk Golden Tate’s 22-yard catch to extend the Detroit possession. When Johnson made the last of his seven catches (for a mere 56 yards), he was less than a yard away from punching in what surely would have been the game-winning score. But Chancellor, the biggest boomer in the Legion of Boom, jarred loose the ball .

Whether Wright made an illegal bat, the ball went to the Seahawks. QB Russell Wilson and WR Jermaine Kearse then sealed the win when they hooked up on a 50-yard pass play on third-and-two with 1:34 remaining.

The Seahawks had multiple opportunities to put a beating on the 0-4 Lions (they had a first-and-goal at the Detroit 9 in the second quarter and lost 26 yards on the possession), but made uncharacteristic errors, including two fumbles by Wilson, both recovered by the Lions. Wilson fumbled 11 times in 2014 and never lost one. He lost two fumbles in the fourth quarter Monday, one leading to Detroit’s touchdown.

Wilson made two astonishing plays in the second quarter. He eluded a sack and two tacklers while spinning 360 degrees and found Kearse for a 34-yard gain, which set up a postcard-perfect 24 yard-TD on a post route to Baldwin. That marked Seattle’s first, first-half TD of the season.

Playing without RB Marshawn Lynch (hamstring) for the first time in his Seattle career, Wilson became the focal point of the offense. Although sacked six times, he still completed 20 of 26 passes for 287 yards and the Baldwin TD with no interceptions for a passer rating of 125.0. Wilson also rushed for 40 yards.

Even without Lynch, the Seahawks extended their streak of consecutive 100-yard team rushing games to 15, dating to last season. Thomas Rawls, who had 104 yards last week against Chicago, finished with 48 yards on 17 carries. The Seahawks finished with 110.

With his 50-yard reception near the end of the game, Kearse finished with 84 yards to lead the Seahawks. Wilson targeted tight end Jimmy Graham five times. Graham caught four passes for 29 yards.

Steven Hauschka kicked two field goals from 51 yards in the second quarter and 52 in the third.

The Seahawks held the Lions to 256 total yards and did a particularly good job of shutting down All-Pro Johnson and Tate. Targeted 11 times by Matt Stafford, Johnson couldn’t escape CB Cary Williams, His longest catch was 15 yards late in the game before his fateful strip. Tate caught three passes for 29 yards and was no factor until his first-down catch in the fourth quarter.

The Seahawks failed to sack Stafford, but held him to 203 yards on 24 completions. Stafford averaged 5.8 yards per pass.

After allowing 61 points in their first two games, the Seahawks have allowed 10 in their past two.

Tyler Lockett, who caught a career-high four passes for 58 yards, returned two kickoffs for 30 yards and five punts for 42, but his biggest play came when a punt bounced off his face mask, resulting in a Detroit fumble recovery that the Lions ultimately failed to convert into points.

“It was a difficult ending for Detroit but we are thrilled to get to 2-2, and now we’ll move forward. We are still a work in progress and not as clean as we need to be. We have some issues that we have to take care of, but I loved our intensity and effort” — coach Pete Carroll.

“A win is a win, but we tried to give this game away. There are a lot of things we’ve got to improve on. That play by Kam (Chancellor) was was huge for us, but we’ve got to get better and not give the ball away” — WR Doug Baldwin.

Three Seahawks departed with injuries. DB Marcus Burley broke a thumb in the second quarter, RB Fred Jackson an ankle injury in the third and WR Ricardo Lockette left with a shortness of breath . . . The Seahawks improved to an NFL-best 22-8 all-time on Monday night (including 10 wins in a row) and are 14-3 in all prime time games under Carroll . . . The Seahawks hold an 8-5 all-time edge on the Lions . . .Wilson has 26 passer ratings above 100.0 in his career. He has quarterbacked 37 wins and is 24-3 at CenturyLink Field.