Seahawks quarterback Russell Wilson made several fantastic escape plays Monday night against Detroit, but is on pace to absorb a record pounding. 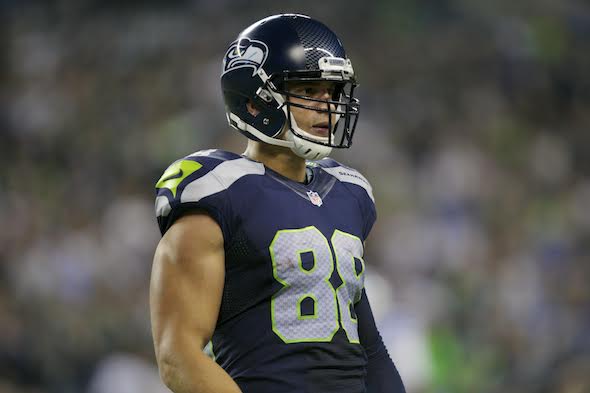 Because of an officiating crew inexplicably ignorant of fine print, specifically NFL rule 12, section 4, article 1 (b), which “makes it illegal for a player to bat or punch a ball if it is loose in either end zone,” the Seahawks got away with one Monday night, escaping CenturyLink Field with an asterisked 13-10 victory over the Detroit Lions. For what it’s worth, neither Pete Carroll nor Mile Holmgren knew about the rule, either.

Wilson had 37 dropbacks. The Lions, ranked T27 in total defense, sacked, hit or placed him under duress 18 times (48.6 percent). Officially, the Lions dropped Wilson six times. A quarterback with less mobility – that’s all of them – would have gone down double that number.

Talk about handling pressure: While under duress, Wilson went 5-for-8 for 119 yards. Flushed from the pocket, he went 6-for-9, averaging 16.1, including a 50-yard completion on 3rd-and-2 to Jermaine Kearse to ice the game. Facing a blitz, Wilson went 7-for-7. With all that heat, it’s astonishing Wilson only fumbled twice.

ESPN analyst and former head coach Jon Gruden made the point repeatedly Monday night: The Seahawks have no ability to protect Wilson, in whom they have invested millions of dollars. As all network analysts do, Gruden tried to soften his criticism by explaining that the Seahawks feature an almost-new offensive line that “is a work in progress.” But his message was clear: Wilson is low-hanging fruit who is forced to play “playground” football, an assessment seconded by Doug Baldwin in a post-game interview.

Gruden didn’t say so, but left the impression that Seattle’s offense isn’t so much designed as it is whatever Wilson can conjure up on any given down. OC Darrell Bevell has his charts and calls, but because of the all the swiss cheese up front, probably has no idea what’s coming more than half the time.

Wilson’s critics argue that he isn’t a classic pocket passer, a detriment that keeps him from joining the small list of elite quarterbacks. Wilson wants to play from the pocket, but his offensive line won’t allow it, forcing him to flee more than any quarterback in the league. Wilson has been sacked 18 times in four games, including 12 times over the past two weeks.

That means he has already been dropped six more times than Aaron Rodgers (six) and Tom Brady (six) combined. The two marquee rookies, Jameis Winston of Tampa Bay (seven) and Marcus Mariota (two) of Tennessee together have been sacked exactly half as many times as Wilson.

Wilson (4.5 sack per game) is on pace for 72 sacks, which would make him one of three players in NFL history (also David Carr and Randall Cunningham) taken down 70 or more times in a season.

With Wilson shown for comparison purposes, the following is a list of the most-sacked quarterbacks for a single season in NFL history (since 1969 when sacks were first kept), sorted by how many times they were dumped through their first four games. Only Carr experienced a more nightmarish first four than Wilson.

In Seahawks annals, only one quarterback comes close to Wilson’s 18 sacks in four games: In 1978, Jim Zorn was flattened 15 times. Dave Krieg, sacked most often in franchise history (341), never went down more than 12 times in the first four games of a season.

The Seahawks are in this jam in part because they traded veteran C Max Unger, forcing them to go with Nowak, a former defensive tackle who is in over his head. Worse, Unger went to New Orleans for TE Jimmy Graham, whose skills Bevell won’t, or doesn’t know how to, exploit.

With the Unger-Graham trade, the Seahawks weakened themselves at center and so far haven’t figured out how to best utilize their big tight end playmaker. Perhaps that will change in the coming weeks. The big if is whether Wilson will be upright to see it.

On the air Monday night, Gruden made it clear he wouldn’t bet on it.