Thiel: Center play not always a snap for Nowak

Among the myriad problems along the offensive line is the errant shotgun snap from C Drew Nowak to QB Russell Wilson. Carroll insists it will be fixed this week. 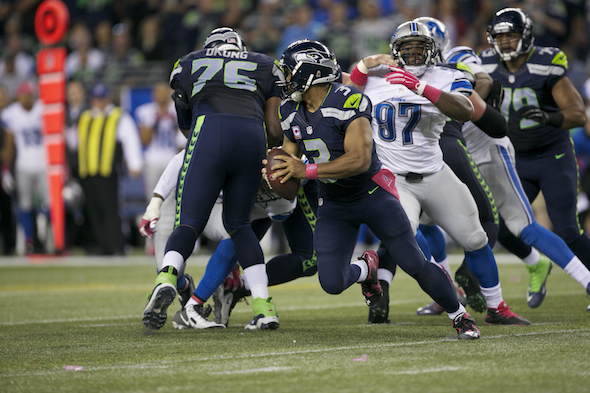 RENTON — Pete Carroll is rarely one to back off his standard bromides, diversions and euphemisms that protect Seahawks players in public from criticism by the head coach. So when he changes up his language, even a little, it’s a safe bet that ooga horns are sounding in the team’s meeting rooms.

Indeed, alarms should be screeching: After 18 sacks and lesser harassments of QB Russell Wilson through four games, the $87 million man is being treated like a bratty little brother when the parents aren’t home.

“I’m not going to keep talking about this work-in-progress stuff,” Carroll said on a radio show this week. “We’ve just got to get better.”

“Work in progress” is, according to those of us enrolled in the Carroll School of Semantics, his euphemism for a bad play, player or players. Carroll’s relentless optimism insists that he cast the description as if improvement was near.

In this case, he was speaking generally of woeful production from the offensive line, which is populated largely with strangers in a strange land. More specifically, he was speaking of the most fundamental moment of every shotgun-formation play from scrimmage — the  snap from center.

Drew Nowak is the center. But he was a defensive lineman in college at Western Michigan. Then he played a little guard on the practice squad at Jacksonville. He never played center in a regulation game until he made his first professional start last month against St. Louis.

So a lack of practice with the task  is understandable. But still . . . it’s hiking the ball. Third-graders do it on the playground. But if that task isn’t done right in the NFL, the play is usually DOA. As is often the quarterback, at least for a play.

Wilson was sacked six times Monday in the 13-10 win over Detroit, and it easily could have been 12 if Wilson hadn’t been quicker than the last fly in the bedroom before lights-out. Not all, or even most, of the sacks were the fault of Nowak’s snaps. But if it’s even one, that’s 10 too many.

“There was a ball that was low-left,” Carroll said after the game Monday. “There was another one. It’s just every once in a while.  He works extremely hard at it, and he’s way better than he was when he started.

“He’ll continue to get better. Sometimes these hard lessons help us. Maybe we’ll get a little bit more precise and be able to count on him.”

Four games into the season, and the Seahawks can’t count on the guy at the ignition switch? Gah.

Certainly, relief must be near, because Nowak is starting again at 10 a.m. Sunday, when the Seahawks play in Cincinnati a 4-0 Bengals team that has been pointing at the Seattle game as the benchmark test of its growing prowess.

Carroll said intended to keep the line intact — “right now, yes,” was how he put it Wednesday.

As for Nowak, he would agree that his problems are fixable. Otherwise, he is Mackey Sasser, the Mets catcher in the early 1990s who suddenly developed a tic that prevented  him from throwing the ball back to the pitcher.

Asked in the locker room what was most disappointing to him about the line play Monday, Nowak said, “Myself and the snaps. It’s my job to make sure everything is on point. It wasn’t the way it was supposed to be.

“I can handle it. I just need to snap first and play second.”

Patiently and politely, Nowak explained his work issues. Asked if, given the multiple pre-snap responsibilities at center, his concentration lapsed, he took a deep breath and paused.

“It might be a little lapse,” he said. “Sometimes you’re making a call and the (QB) cadence goes, and you don’t even think about the snap. That might be the case. I just have to go out there and make the (protection) call first, make the snap and go from there.

“It hadn’t been a problem, so it’s very frustrating for me.”

It might seem to some fans that unless a snap gets past the QB, it’s not necessarily a disaster. While that’s true, it’s also true that Wilson diverting his eyes to a misplaced snap for even a moment is crucial.

The first second of a play removes nearly all disguises by the defense, revealing blitzes, zone vs. man coverage, inside or outside pressure. Wilson adjusts well to pressure wherever it comes, but a moment lost to looking away for a snap can be the difference between a completion and a sack.

As Carroll put it: “There’s not an area for lost time in there, where we can still function the way we want to. We just have to be sharper.”

With a veteran line that has played together, a bad snap or two wouldn’t be that big of a deal. But with the Seahawks line, owing to the trade of C Max Unger and a lack of investment in personnel, a bad snap adds to the feeling that the offense is driving down Queen Anne Hill in a snowstorm: All goes sideways.

That includes every position on the line, plus new TE Jimmy Graham, a k a the Ghost Blocker. Pro Football Focus rated all NFL lines this week, and put the Seahawks’ group 30th of 32. Dispute their methodology if you like, but the Seahawks have yet to score a rushing touchdown.

Obviously, some of that has to do with the injury absence of RB Marshawn Lynch. But there’s little doubt that Nowak, guards J.R. Sweezy and Justin Britt, and tackles Russell Okung and Garry Gilliam are losing too many one-on-one matchups.

As far as center, Carroll understands the significance of the job, even though he OK’d the departure of Unger, whom he praised repeatedly over the years as the rock of the O-line.

“That’s a very fundamental part of the game, and it’s easily overlooked,” Carroll said. “When you have a game where you’re troubled a little bit, you can tell it’s an enormous factor.

“That’s something that we should be able to get clean here this week.”

Carroll has no choice. He abandoned the work-in-progress euphemism. After another failure, all that is left to fall back on is, well, honesty. No one dares go there.