WR Tyler Lockett muffed a punt Monday night against the Lions because he ran to the ball instead of letting it come to him. A rookie mistake that won’t happen again. 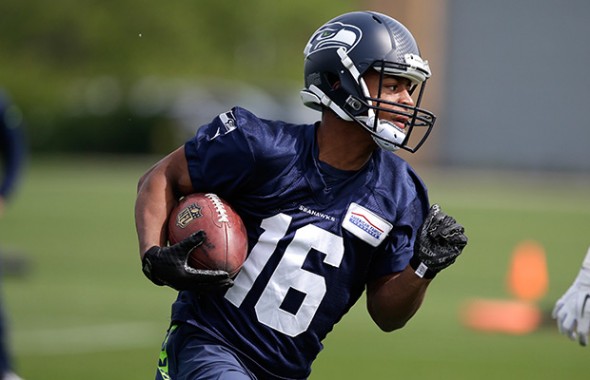 Tyler Lockett already has other teams planning on how to contain him, but the rookie isn’t letting his success go to his head — especially after a muffed punt return. / Seahawks.com

Much attention has been given to the Seahawks’ turnover troubles in Monday night’s 13-10 win over the Detroit Lions, and rightly so. QB Russell Wilson coughed up the football twice. But he wasn’t the only one to lose the ball. Rookie WR and return specialist Tyler Lockett had a third-quarter punt bounce off his facemask as he tried to catch the ball at a full sprint, a mistake he characterized as a learning experience that won’t happen again.

“I should have just stood there and caught it like I’ve been doing,” said Lockett Wednesday. “I’d rather it be a learning experience at the beginning of the season than at a crucial time.”

Lockett’s been learning fast. Four weeks into the season, the first-year receiver/returner out of Kansas State has already run back a punt and a kickoff for touchdowns—the only return man in the league to do so—earning him September’s honor as NFC special teams player of the month.

Lockett already has done plenty of homework. The 23-year-old was a consensus All-America selection in 2014, holds K-State’s all-time record for return yardage, and led the FBS last year in average yardage for punt returns.

Head coach Pete Carroll said Lockett is a great natural catcher of the ball, but that Monday’s slip-up was a case of trying to do too much.

“He just misjudged that,” said Carroll Wednesday. “He boldly went after one, he was trying to see if he could make something happen, and it just got a little bit high on him.

“I trust him. He’s as good a catcher back there as you can find, but in that case, he went too far; he tried to do too much, which is generally where we find our problems.”

“He’s an all-around athlete, so he can do about anything you want,” said Carroll. “And he works at it, too. He’s the hardest working guy we have here, staying late, getting out there early. He gives you every reason to trust him, and if he makes a mistake, he’s going to correct it.”

For Lockett, Monday’s mistake is easy to fix; he’s done trying to catch on the run.

“Not for punts, I’m just going to throw that out the window,” Lockett said with a smile.

Catching on the run aside, Lockett’s versatility as a returner extends beyond just quick feet and (normally) sure hands. Against the Bears, Lockett sold a fake punt return that helped spring CB Richard Sherman for 64 yards. Monday, Lockett disguised a potential return that sailed well past him, slowing up the coverage to allow the ball to bounce into the end zone for a touchback.

Lockett said whether it was deception or speed, he’s game for whatever the coaching staff needs.

Despite his return prowess, Lockett stayed humble about the fact that opponent special teams have to game-plan around him.

“It doesn’t really (impress) me too much,” said Lockett. “It’s great to always know that you’re a target for other teams. But for me, I’m not going to feel good about myself if another person says things about me. I’m going back to the drawing board to get better.”